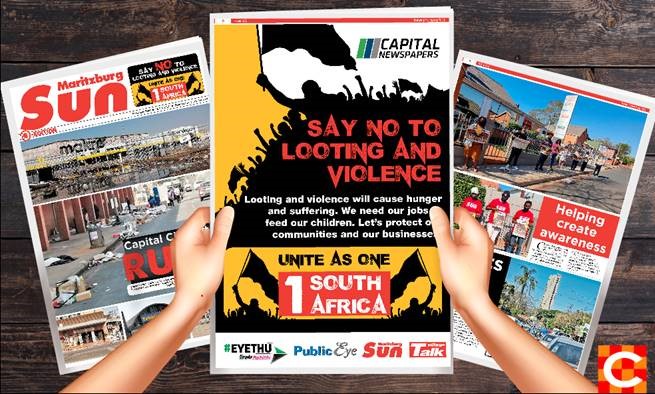 *[PARTNER CONTENT] The past week will be recorded as one of the worst in South African history. Images, video footage and stories of destruction, looting and death hit the country like strong blows to the gut.

While fake news and emotionally charged messages circulated on social media, Caxton newsrooms focused on the verification of information.

The importance of local media has once again been highlighted as communities had to rely on the trusted voice of their community publishing platforms to keep them abreast of developments. This access to trustworthy information better prepared them for the onslaught and its related challenges.

Regionally, most of the site traffic was from Gauteng and KwaZulu-Natal, but Mpumalanga showed over 100% growth.

In Empangeni, the Zululand Observer team has been hailed by its community for its minute-by-minute reporting of unfolding events. Although the newspaper was not physically printed, the publication was shared for free on all social media platforms and groups.

“I keep reminding the journos that we are not just chasing stories – we are documenting one of the most important incidents in the country’s democratic history,” were the wise words of Zululand Observer editor-in-chief Dave Savides.

The dust had barely settled and Joburg North publications had launched a campaign to assist businesses impacted by the civil unrest. Daniella Graham, editor of the Joburg North publications, says: “We have seen the triumphant spirit of the community rise amid the chaos, as volunteers have taken to the streets of Alexandra to start cleaning up the mess.

“Readers have turned to our publications’ social media pages to ask how they can help. Never one to sit back and watch our communities suffer, our branch has stepped up to help all businesses by sharing the stories of how they have been impacted, their needs and even affording them an opportunity to promote themselves.”

Advertisers have been offered free online advertorials by the group, under the banner ‘Caxton Cares’. Distribution of print editions in Gauteng went without hiccup this week, says Peter Scully, general manager for distribution in the province. “We were able to deliver newspapers door to door in areas like Soweto, Alexandra and Vosloorus without incident, apart from a few distribution points in malls that were destroyed.”

In the Lowveld region of Mpumalanga, Lowvelder was cited as a trusted partner by the security companies and police for its dissemination of information. Journalists received regular briefings and updates from the joint operation command (JOC) team. In this region, six taxi associations, the city council and JOC united to thwart looters.

In KwaZulu-Natal, Roelien D’Amico, editor of Southlands Sun in Amanzimtoti, says the impact of the lootings can already be felt as food prices have escalated overnight, with a bag of 2.5kg flour now costing R110 and bread up to R50 a loaf at some retailers. “We are now reporting on the mop-up phase and despite what has happened, the community is standing together with no signs of racism.”

Editor of Soweto Urban Mzwandile Khathi says its teams faced intimidation from looters when they tried to take photos. He says they felt overwhelmed by what was happening across Soweto. However, they persevered and received positive engagement from their social media audiences.

Head of Caxton Local Media Karen Geurtse says editorially, they are assisting major advertisers by offering them online content to communicate their plans with regard the reopening of stores and services.

“The group continues to monitor activities day by day in those areas in KwaZulu-Natal where printed newspapers could not be delivered this past week and remains fully focused and committed to getting these back into the communities as soon as possible.”