Future-proofing the radio industry in a changing audio landscape 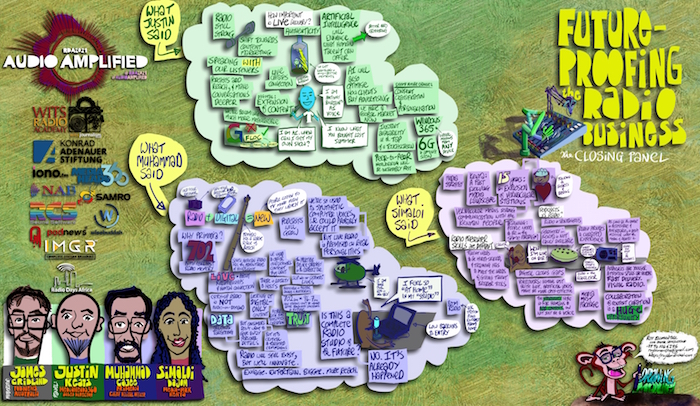 The closing panel for Radio Days Africa 2021 seemed to have arrived quicker than ever before this year, after two weeks of incredible conversations across 21 online sessions, hosting over 70 different speakers from around Africa and the rest of the world.

The last day of the conference featured an engaging conversation about the future of radio, where things are headed in conjunction with new audio technologies, and what can be done to keep the industry alive and well in the midst of a rapidly changing global landscape. Today’s session was moderated by James Cridland (editor at Podnews in Australia) and featured contributions from Justin Keats (sales director at MediaHeads360 in South Africa), Simaloi Dajom (media trainer in Kenya) and Muhammad Cajee (chief digital officer at Primedia in South Africa).

To kick things off, Cridland asked Cajee how the radio space in South Africa compares in relation to the global landscape. He mentioned a reality that is often the case across the continent, noting that “we tend to be a couple of years behind the rest of the world”. This isn’t always a bad thing, as hindsight from abroad can provide insights to help mitigate risks locally.

Dajom was quick to bring up the “fast evolving” landscape of radio in Kenya as something equally positive. “You can’t even compare it today to what it was 20 years ago,” she said, touching on the rise of vernacular stations, with broadcasters meeting needs by “speaking to people’s hearts,over and above just their minds”.

That said — and as we’ve heard in other sessions this year — high data costs and lack of connectivity are still major barriers to overcome on the continent. Cridland said these are “hobbling the industry in Africa”.

Dajom believes that because new technologies aren’t readily available in Kenya, content on demand will take longer than it should to really take off in the way it has elsewhere. “Most of it comes through on a subscription basis,” she added. “Cost of data and costs of producing content are too expensive, for now”, which is slowing the integration of traditional radio and digital technologies in a bid to reach bigger audiences than before.

New digital technologies continued to be a hot topic throughout the session. Cridland mentioned that one in every four people in Australia now owns and regularly uses a smart speaker. Keats brought up a story he recently read where artificial intelligence had been used to posthumously create the 10 hours of audio needed to finish a film project Anthony Bourdain was involved in before his death. He also spoke about the fact that “AI is able to crunch huge amounts of data”, which helps with speeding up the monetisation of digital platforms in regions where penetration is showing signs of making prominent gains in the coming years.

In spite of new audio-based technologies, radio is still able to set itself apart from digital platforms based on one key factor. The panel agreed that the fact that it is live (and most new technologies aren’t) is a huge selling point. Keats talked about the authenticity of live audio, and the fact that it produces what he calls “lightning in a bottle moments”. Dajom summed the segment up perfectly, mentioning that in Kenya, “live radio remains popular because of one thing. Listeners like to hear themselves on air”.

Naturally, radio listeners in Africa are not the only people concerned with how they sound on air. Presenters consider it central to doing their jobs well. Towards the end of a session, a delegate asked about the changes in broadcaster responsibilities over the years. She inferred that they have had to become multi-platform content creators.

“20 years ago, the job was just about playing music and talking on air,” she wrote. Dajom responded by pointing out that “in media now, you are expected to be a master of everything”. This has an effect on the way presenters are trained and how resources are allocated to this. According to her, presenters have to learn to plug directly into the needs of the audience across all platforms if they want to stay relevant in the long run.

In wrapping up the session, Cridland asked the panel what the single biggest potential change in the industry will be over the next five years. Keats mentioned content classification, categorisation and crystallisation through the use of AI.

Cajee brought up the fact that engaging and entertaining audiences will have to be applied at a much bigger scale than now, across both existing and new platforms becoming available. Dajom spoke about the fact that youth attention spans will keep getting shorter and shorter.

“This will put even more pressure on all media to be able to provide value over an even shorter timespan than now”. She also touched on the prominence of visual media, highlighting that optimising for mobile devices will still be very important moving into the future.

In summing up where the radio industry stands today in spite of the vastly changing audio landscape, the panel offered hope and optimism to the delegates in attendance. Keats said that “radio still continues to be strong because of its authenticity”. Cajee agreed, citing the value of authenticity as a value proposition in the relationship between media companies, on-air personalities and brands. “We certainly don’t see radio going anywhere anytime soon,” he added. For Dajom, the future of radio in Kenya is guaranteed, because of listener loyalty to the medium. “It continues to give a voice to the voiceless,” she said.

And with that, Radio Days Africa founder Franz Krüger popped up on screen to formally close out another successful edition of the conference. He brought up all the exciting new elements that were introduced to the conference this year, which saw the over 3 000 attendees gaining access to podcasts, an app, fringe sessions and even some digital animal interaction in the form of the panelist dogs and cats “adding yet another element that we haven’t seen before”.

On a more serious note, he mentioned that the session discussions had been both rich and complex this year. This was especially true within the context of the ongoing unrest in South Africa, as well as the fact that the industry finds itself at a crossroads, on the cusp of having to wrap its head around the brand new (digital) audio consumption landscape.

“You can see it as a threat or an opportunity,” he added. “The point is that radio continues to bring to the table knowledge of how audiences work, how people use the medium, and how it fits into their daily lives”.

In closing, he thanked the corporate sponsors for their ongoing support, as well as acknowledging the team involved for their hard work this year. “We could not have done this without you,” he said. “That’s a wrap, and see you next year.”