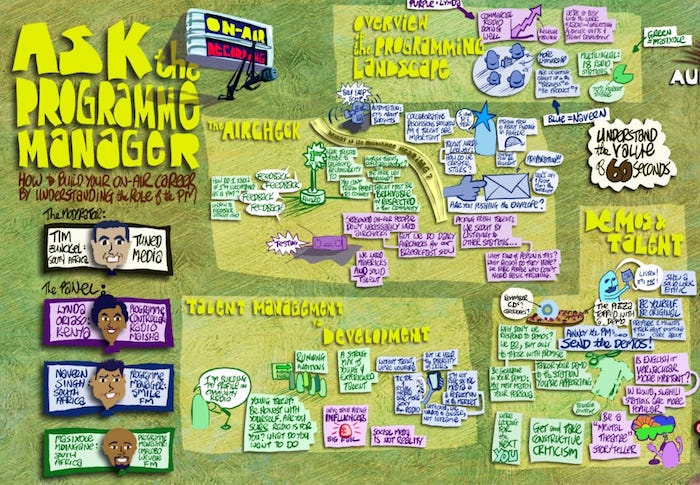 The discussion kicked off with an overview of the radio landscape in each of the panelists’ respective locations. Singh said that it was “encouraging to see an increase in time spent listening in the Western Cape over lockdown”  – something he hopes will be reiterated by the upcoming batch of listenership figures from the period.

Oriaso talked more holistically about the radio landscape in Kenya, mentioning that the Top 5 most popular stations in the country broadcast in Swahili. Considering there are over 100 million native speakers of the language in Africa, it’s hardly a surprise that content in the language has captured such a big share of the market. Always on top of what’s happening on the continent, Radio Days Africa is officially a bilingual conference this year, hosting its first session in Swahili on Thursday the 15 July at 10:00 CAT.

It’s impossible not to mention radio talent development when you have a couple of PM’s ‘around the same table’, so to speak. Mdingane  – who heads up programming for a station with over five million listeners  – was quick to say that it is easily neglected, especially in bigger stations. Singh called it “the one thing we need”, while reiterating that actually having the time to implement it is sometimes wishful thinking. The panel agreed that it is relatively “easy to be talented on social media”, but according to Oriaso this doesn’t translate to radio listenership, or to how you grow as a broadcaster. “Social media is good,” she stated. “But it is not reality.”

Development aside, radio talent from all over the continent have to be adaptable to the changing digital audio landscape. They have to be able to tell stories, be highly informed and engage on a multitude of platforms successfully too. As has been the case with TikTok  – which has been mentioned during all three sessions of the conference this year so far  –content doesn’t always have to be scripted.

This creates an added layer that makes spotting ‘true’ talent more complicated, further encouraging programme managers to simply put in a call to each other, bouncing existing talent from one station to the next. Oriaso goes as far as saying that she (and her counterparts at competing stations) scout exclusively from the existing talent pool in Kenya.

According to Zunckel, there are “a lot of radio skills you can train, but you can’t train anybody to connect with people on a natural level”. This requires a delicate balance of intuition and understanding. Programme managers also have to have intuition when it comes to finding new talent, and people with aspirations to get behind the mic will be happy to hear that according to the panel, the demo isn’t dead.

Singh reminded delegates to always be original when they send theirs to a station. “Make sure that you’re being specific about what it is you’re offering, and that it fits the vibe of the show and station”, Mdingane added. “We’re not looking for the next Gareth Cliff, Bonang or Mo Flava. We’re looking for the next you.”

And on to the SABC…

Hot on the heels of yesterday’s discussion with SABC COO Ian Plaatjies, RDA founder Franz Krüger was joined by Nada Wotshela  – group executive for radio at the national broadcaster in South Africa  – for Day 2’s afternoon session. Titled The SABC Post S189, the conversation was a one-on-one deep dive into the restructuring that has taken place at the SABC over the last year, which included a decision to retrench over 600 employees of the organisation.

Not keen to shy away from the severity of the process, Wotshela called it “a traumatic period”, especially as the SABC ended up with more job losses than they initially anticipated. “We had no illusions about Section 189,” she said. “It was very much necessary. We had to go through it to save the organisation”. She was adamant that the SABC would have no chance to deliver on its mandate in the long run with no money to invest in marketing or new technologies.

Financially, things seemed to have taken a turn for the positive since the process was finalised. Two factors were discussed as a possible explanation for the SABC “turning a corner” and declaring a profit of R43 million this past April, a feat which was achieved for the first time since as far back as 2016.

The first is related to the reduction of the total number of station manager roles across SABC stations from 19 to 12, and changing the roles to what they call ‘business managers’. At salaries of roughly R1.2 million per annum (a figure Wotshela used as a reference point), the payroll burden could be reduced by upwards of R8 million in a calendar year. Although Kruger has his reservations about the commercial nature of these new roles, and whether day-to-day operations would now fall onto the already heavily burdened programme managers instead, Wotshela played these down, citing that they had come up and been discussed during the planning phase.

The second possible factor for the financial turnaround may have to do with the fact that the SABC has sold a lot of curriculum-based advertising packages, virtual events and webinars to sponsors outside of the usual government departments.

“We weren’t spending a cent, as we already have the [virtual] platforms to host these,” Wotshela said. Many education and health programs during the pandemic have been sponsored by NGOs and corporations as a result of CSI considerations (and a need to be affiliated with topical content). Although somewhat of a throwaway comment during the discussion, the fact that the SABC hasn’t spent any money marketing their own brands probably also has a lot to do with their healthier looking bottom line.

The pivoting SABC might not have changing mandate or license requirements on the cards as it transitions into a new era, but that doesn’t mean it hasn’t started thinking about the new technical audio platforms available, and how to incorporate these into their stations in future. “We’re very excited about the plans that we have, and the work that is being done in the background,” Wotshela said.

Although not mentioning the ‘late to the party’ DAB+ (or other digital services) directly, Wotshela did talk about a new website, apps and training programs to ensure employees can produce content for existing and new digital platforms in the future.

The road to recovery for the public broadcaster in South Africa might be a long one, but after the discussion today, there is a glimmer of hope that after years of turmoil, the tide is slowly turning.

The media world is a continually changing space with increased competition between brands for microphone and screen time. Talent needs to remain relevant, informed, and relatable while delivering a high-quality product under increased pressure. It is under these circumstances that women broadcasters and media professionals have flourished in recent years and why it could be said #thefutureisfemale

Budget cuts have seen many senior staffers make way for what has become known as the “juniorisation” of broadcast organisations. Many senior staff are qualified by experience whilst younger practitioners are being trained in Media Schools and Journalism Departments. Is the modern-day classroom adequately preparing students with the necessary skills for the rigours of working in broadcasting?