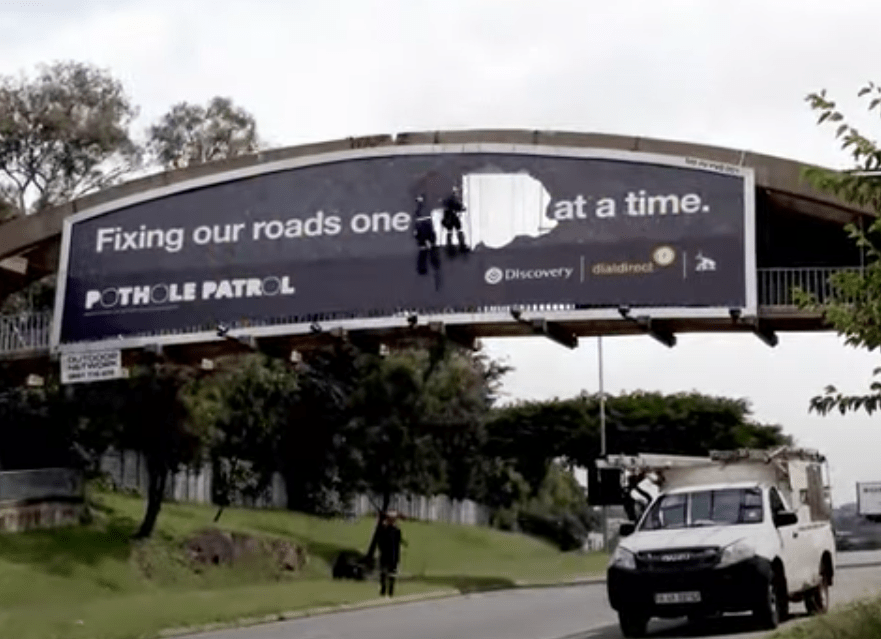 The ‘Pothole Patrol’ has successfully filled a gaping hole on William Nicol Drive in Johannesburg … a pothole prominently featured across a large portion of a giant billboard on that stretch of road.

In May 2021, Dialdirect Insurance and Discovery Insure partnered with the City of Johannesburg (CoJ) to launch The Pothole Patrol. Since then, over 80 000 potholes have been repaired and – despite Gauteng being battered by above-average rainfall – the team continues to make a considerable impact in improving the quality of Joburg’s roads.

Anneli Retief, Head of Dialdirect says that there’s magic in the partnership.  “Two insurers, competitors, have become collaborators by joining hands for the greater good.  Coopetition is common in the IT industry. Burger King and McDonald’s are also well-versed, partnering up to help fight cancer.  It makes sense when there is a societal issue that needs an ‘all hands on deck’ approach to solving – and the scourge of potholes plaguing our City certainly qualifies.”

The Pothole Patrol is mandated by the City of Johannesburg to repair potholes measuring a maximum size of 1m by 1m.  Anything bigger than this, or deeper than 5cms, is referred to as a reinstatement. Reinstatements, road excavations and deep trenches or cracks occur as a result of digging during road construction or for creating a passage for the laying of services such as pipes and cables. As such, they are not classified as potholes.

“Regardless of the size or depth of the pothole, if reported via The Pothole Patrol app, an inspector from The Pothole Patrol or JRA will always be sent out to inspect the damage,” says Discovery Insure’s head of strategy, Kgodiso Mokonyane.

Dialdirect and Discovery Insure realise that more needs to be done to assist in clearing the current backlog in repairs as the City struggles with high rainfall and a resultant increase in the number of potholes currently developing on many roads.

“Using coopetition and our unique tech solutions, we are increasing The Pothole Patrol’s fleet of repair trucks to help improve the state of our roads,” says Mokonyane.

The insurers encourage Joburg road users to continue reporting potholes to The Pothole Patrol.  The Pothole Patrol app can be downloaded via the app store or Google Play.  Alternatively, WhatsApp the word ‘Hi’ to 084 768 4653 and follow the prompts.