Full speed ahead with digital connectivity and Equiano 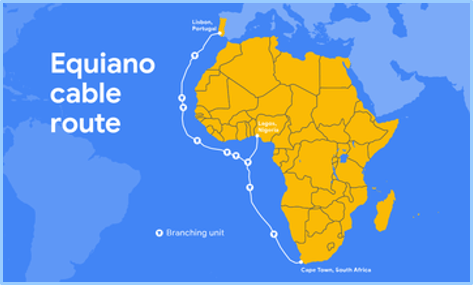 Google’s state-of-the-art Equiano submarine cable is expected to be operational by end 2022, as the infrastructure installation project proceeds. Equiano is Google’s 14 000km submarine cable that will run from London to Cape Town, with other confirmed landing points being Portugal, Nigeria, Namibia and St Helena. Other countries will be able to join the network in the future.

The cable project was announced in 2019 and was originally scheduled to go into operation in 2021. The latest update is that the cable will probably be operational by year end, and no doubt the delay is due to the long Covid-19 lockdowns. Togo celebrated its landing last week – the first in Africa – while the Namibian landing station is ready and waiting, having been completed last month.

Equiano is fully-funded by Google and is part of its US$1 billion investment in building digital capacity on the continent. It will provide fifth-generation 5G service and “20 times more network capacity” to West Africa and SADC than these regions currently enjoy. I

t will also ensure more available and more affordable broadband on the continent, reducing internet prices by “about 14%” in some countries. It is the second submarine cable to run the length of western Africa, with WACS running from London to South Africa and connecting 15 countries. WACS was completed in 2012 and upgraded in 2015 and in 2019.

Google is no doubt already responding to its data on internet adoption rates around the world and the slowdown in the growth in internet users over the last ten years. The Hootsuite/WeAreSocial/DataReportal report to January 2022 shows that growth is down from +11.7% YoY (year on year) in January 2012 to +4% YoY in January 2022.

So while some regions in the world are reaching saturation point in terms of internet adoption, there is still enormous room for growth in Africa. Some very rough number crunching indicates that there are now some 618 million internet adopters in Africa, i.e. about 44% of the estimated total population of 1.4 billion.

That leaves about 770 million people still to ‘get connected’ in Africa over the next 15 years or so. And that’s a whole lot of data bundles, website hosting packages, modems, cellphones, laptops, online courses, subscriptions to VOD streaming services, and a million more product offerings that can be sold once they go online.

Juliet Gillies is a highly skilled writer, editor and English specialist. She is a professional writer, having started in the marketing/communication field, but now focuses on educational materials and articles on Digital / Social Media / Marketing matters. She has been writing and editing at a professional level for more than 30 years.