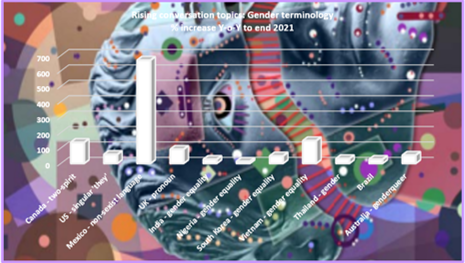 In Part I of this article on some of the global cultural changes identified by the Meta/Facebook ‘2022 Trends Report’, we looked at the rising conversations regarding education and crypto currencies.

Both of these are included in the Greater Expectations category of the report. The other three categories are Diversifying Identities; Relationships Renegotiated; and Expanding Values.

Read Part 1 of Rising culture changes, according to Meta/Facebook here

Now, in Part II of this article, we look at two items in the Diversifying Identities category: Gender and Authenticity.

According to the report, the “gender evolution [is] in full bloom,” as people adopt more fluid identities than the traditional male / female identities. This is particularly the case among GenZers and millennials, who consider traditional gender roles to be “increasingly less relevant” and the male breadwinner role to be anachronistic.

This is no surprise, given the emancipation of women that started a century ago and the massive move by women into the workforce with the outbreak of World War II, in particular in the Western world, where this cultural change has been extensively reported on for almost 100 years now.

Add to this the explosion in divorce statistics since the 1970s and the exponential increase in single mom households in the West in the last 30 years, and what is surprising is that the male breadwinner role is even still being spoken about in some countries.

According to the report, “#Love conquers all is the most used # on Instagram, and the rising conversations focus on both gender equality (worldwide) and gender fluidity (in Western markets), with 25% of gen Zers expecting that their gender identity will “change at least once in their lifetime”. This ‘‘gender blending”, as it is referred to, is driving increasing use of the singular ‘they’ and gender-neutral pronouns.

The rising conversation topics and the year-on-year (Y-o-Y) growth in these topics is shown in the graph below. The second graph shows the Y-o-Y growth in certain countries in terms of various related terms, based on Instagram # use. (But we don’t know if there was positive, negative or neutral sentiment associated with the use, and this is key information.)

Meta/Facebook believes that the two-year lockdown led to self-reflection and a pivot to ‘realness’ in a “quest for authenticity [that] led to rawthenticity”, i.e. embracing the “unvarnished self”. Traditional beauty standards are no longer de rigueur and body positivity and fat acceptance are new topics in the public discourse. Of course this is being driven by an element of frustration, as some people “feel overlooked” or believe they are discriminated against due to gender, religion, ethnicity, race, age, etc.

But “ostracised groups [are] emerging and gathering strength,” says Meta / Facebook, and people are demanding “that media and advertising be inclusive, representative and real”. And that’s a very good thing, as it will reduce the pressure on the young and the vulnerable to feel that they have to look a certain way, which leads to all sorts of issues. The beauty and fashion industries in particular need to sit up and take notice of this, and it’s nice to see that the early adopters are already hard at work.

The graph below shows a few of the rising conversation topics in this area. But please note that with all the items reported on in the Meta/Facebook report, there is no indication of whether the datasets are complete or not. If it is the latter case, we don’t know the basis for selecting certain items and excluding others, which means that other items with higher growth may have been excluded for any number of reasons or purely on the basis of subjective selection.

In this regard, it is important to note that the methodology section states: “Plausible futures were revealed through data triangulation … the trends that are most likely to move from niche to norm …”.

(Source: All data and quotes were extracted from Facebook’s 2022 Trends Report.