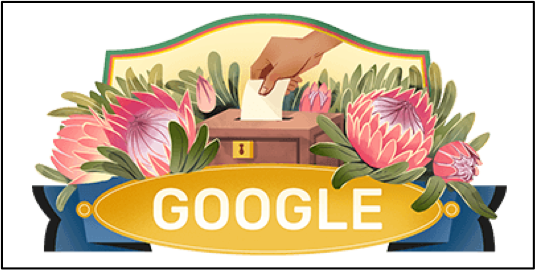 Google doodle commemorated South Africa’s Freedom Day on Wednesday; 27 April is the day on which the first democratic elections were held in South Africa in 1994, when all citizens could vote for the first time. Freedom Day 2022 marks 28 years of freedom and democracy in the country. The Presidency announced that the theme for this year’s celebration was ‘Consolidate our democratic gains’.

South African-themed Google doodles are increasingly being seen, with two female South African icons already having featured in April 2022. Charlotte Maxeke was featured on 7 April, followed by Nomhle Nkonyeni on 9 April. Maxeke was the first black South Africa woman to earn a university degree, when she graduated from Wilberforce University, USA in 1903 with a BSc degree. Nkonyeni was the first black woman to perform at CAPAB in 1981, when she performed in the lead role of ‘Die Swerfjare van Poppie Nongena’ (loosely translated as ‘The years of wandering of Poppie Nongena’).

Maxeke was born in the Eastern Cape in 1871. She started school at the age of eight and completed high school in the Eastern Cape. Her family then moved to Kimberley, following the discovery of diamonds, where she taught languages. She joined a church choir, which toured Europe and North America in 1896. The tour was abandoned in Cleveland, and she then attended the African Methodist Church University on a church scholarship.

She was taught under the famous pan-Africanist, W E B du Bois, and met Marshall Maxeke, whom she married in 1903.

After returning to South Africa, Maxeke became an active advocate for education for Africans and became involved with the  South African Native National Congress. She joined the African National Congress Women’s League in 1918, and later joined the Industrial and Commercial Workers Union. She served as a leader of the ANC in the 1930s and was involved in setting up the National Council of African Women. She actively advocated on matters relating to women’s issues and for better working conditions on farms, and was part of the protest against the pass laws in Bloemfontein. Charlotte has been honoured with streets, a nursery school, a hospital and a navy submarine named after her, and there is a life-size statue of her in the Garden of Remembrance, Pretoria.

Nkonyeni was born in New Brighton, Eastern Cape, in 1942. She appeared in films such as ‘Zulu’, ‘Red Dust’, ‘Catch a Fire’, ‘Mzansi’ and Laurent Ferrier’s ‘Les enfants du Karoo’ (1997). She earned a number of awards during her career, and received a Diploma in Conflict Management from Lewisham College, London and a master’s degree in Theatre for Development from University of Winchester (previously King Alfred’s College).

In 1961, she helped start the Serpent Players with Athol Fugard. In 2019 she was awarded the Order of Ikhamanga in Silver for her contribution to arts and culture.