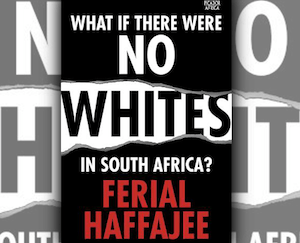 Sandra Gordon, CEO of Wag the Dog Publishers, reviews ‘What if there were no whites in South Africa’ by City Press editor, Ferial Haffajee.

Thank you for making me think again.

Luck plays a substantial part in the timing of new products to market.

Ferial Haffajee’s book was impeccably timed. This must be ascribed in large chunks to luck as it would have taken a sage, perhaps even a wizard to predict the recent escalation of racial polarisation in our country.

So is her book worth reading? Hell yes. But maybe not for the reasons you may think after reading the title and some of the reviews.

The title is provocative and will have attracted many buyers (last I checked it continued to climb the best seller lists). The content is thought provoking, simply presented and explores issues such as white privilege, who owns the country politically and economically and what precludes blacks (this includes anyone who is not white) from rising above comparing almost everything against whites rather than carving a future of their own.

It calls for an open mind and thoughtfulness not an unwillingness to engage in a meaningful way to source a path that may put our rainbow nation back on track. She shies away from reaching any conclusions and depends on a handful of new generation commentators who roundly debunk the concept of no whites in South Africa as a meaningless debate.

I found their responses to her specific questions less than satisfying given their stature. Haffajee takes out of this however, an indisputable truth. The new generation of influential blacks across economic, political and social spheres are not willing to follow the route set by their leaders of the 1990s, nor does the current crop please their aspirations. They are frustrated and angry, as can be seen by continuing demonstrations particularly at Universities.

I conclude that while political power is in black hands other shifts are necessary to transform the country. And both blacks and whites need to step up to the plate which will require a massive effort and perhaps sacrifices that many may find unpalatable.

What I liked most

Haffajee’s memories about growing up during Apartheid in Bosmont, a poor Johannesburg suburb, are engaging and revealing. As is her rise through university and in her career, providing an insight into this award winning, globally regarded editor, commentator and activist.

In her inimitable fashion she asks that all South Africans humble themselves, celebrate what has been achieved (significant when you read the stats) and see that our transition is a major work in progress. Still.