Voices of the poor are missing from South Africa’s media 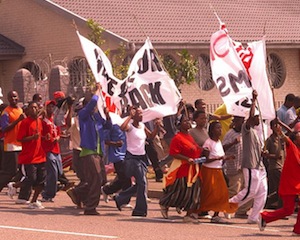 This is clear in the findings of an international research project on the role of media in conflicts arising from transitions from authoritarian rule to democratic government. It focused on four countries – South Africa, Egypt, Kenya and Serbia.

The study shows that in all four countries, citizenship conflicts are frequently reduced to judicial factors. The media’s approach to conflicts is to look at them from the perspective of rights rather than cultural factors.

In South Africa, rather than wilful distortion or neglect on the part of journalists, the findings expose systemic problems underpinning news agendas and coverage.

The project, now in its second year, has drawn on content analysis of print media and interviews with journalists and activists.

South Africa’s formal transition from apartheid to democracy in 1994 is often heralded as peaceful and smooth when viewed in institutional and procedural terms.

But there are lingering problems. Dissent over the unrealised dividends of democracy for the poor and widespread perceptions of government as corrupt have resulted in ongoing protests.

Anger over unemployment, housing, water and sanitation, electricity, corruption in municipalities, and health and crime have all been listed as reasons for the rising number of protests which started in the early 2000s.

The protests are not only aimed at getting basic public services such as water, sanitation and electricity. They are also part of wider disillusionment at the failure of democracy to meet basic needs as well as an attempt by the poor to be heard and included in democratic discourse and policy-making.

This “rebellion of the poor” can thus be considered “democratisation conflicts”. They are similar to those in other transitional democracies where the struggle for equality and human rights did not end with the advent of formal democracy.

While it is widely acknowledged that violent protests are becoming more prevalent in South Africa, the role that the media plays in the cycle of protest and violence is not widely understood.

Our ongoing study indicates that South African community protests receive unfavourable coverage. The reporting also routinely fails to provide depth and context to explain the underlying issues that lead to the protests.

Frequently protests are reported only inasmuch as they inconvenience a middle-class audience, for instance to inform them where traffic may be disrupted.

While journalists are often sympathetic to protesters, they strive for “objective” coverage so as not to come across as supporting a particular side. The result is superficial and limited reporting. Underlying structural issues are not unpacked.

Journalists list time pressures and juniorisation of the newsrooms as some of the reasons for limited in-depth coverage.

And commercial pressures also result in media focusing on protests as drama in an attempt to attract the interest of middle-class audiences.

Fighting to be heard

Very few media articles about protests include interviews with protesters. It seems that protesters’ voices remain unheard, even as their actions are reported. Communities report that photographers are often sent to take photographs without being accompanied by reporters to interview them.

Activists from poor communities report that they only get media attention when they go to extremes, such as causing damage. Protesters told researchers that when they called the media to cover their issues, they were asked if “anything is burning”. If nothing is burning, journalists don’t come and don’t report.

Activists report that with the failure of government channels of communication, and poor media coverage of their plight, the only way to be seen is to create a violent spectacle.

They say that participating in government-created spaces for engagement, such as ward councils and municipal integrated development plans, does not lead to satisfactory responses.

This suggests that protest actions follow a calculated logic, despite activists’ impressions that they are often depicted in the media as being out of control.

While there is some coverage in the media that protests are related to structural economic circumstances, they do not reflect the frustrations experienced by communities over government’s empty promises.

Also, scant regard is given to the failure of participatory processes to address grievances. No attention is paid to the failures of capitalism to address inequality. The heavy-handed response from government to silence protest is also underplayed.

Media coverage differs noticeably depending on the respective outlets. In print, the Daily Sun provides the most coverage of protests. This bears out the tabloid’s claims to provide news from the perspective of the poor and the working class.

Compared to their upmarket print media counterparts like the Mail & Guardian and Business Day, the Daily Sun is also the most critical of most aspects of democracy. It is often the only newspaper where sources are ordinary citizens. For media serving the middle class, sources are mostly drawn from officials or the elite.

The activists we interviewed believe that media could play a big role in boosting democracy in the country by highlighting the issues poor communities face before they spill over into violent conflicts.

A focus on community politics could shine a spotlight on the most marginalised and vulnerable citizens, and in turn could help focus government attention where it is most needed. Media coverage – favourable or unfavourable – added pressure on government to quickly resolve issues.

Activists felt that they would prefer not to have to go to extremes to get media attention. But they also recognised that their protests kept community issues on the agenda.

This article was co-authored with Rebecca Pointer, research assistant at the Centre for Film and Media Studies, UCT.