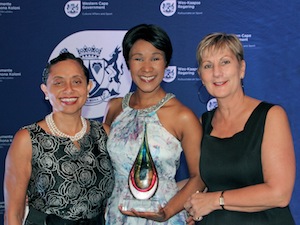 “I have learned and accepted that ‘if it bleeds, it leads’,” said Anroux Marais, Western Cape MEC of cultural affairs, as she bemoaned the fact that good news rarely gets airtime from the media.

“We are building a socially-cohesive society through our arts, culture, sport and recreation programmes. We have been able to identify and support talented youngsters whose gifts and talents would remain unexposed had it not been for our efforts,” she added.

She was delivering an address at the annual Cultural Affairs Awards ceremony held in the Cape Winelands on Wednesday, 3 February 2016.

With the hashtag #ColourfulCulture, it was a night of song, dance and exuberance. Accolades for acts and practitioners plying their trade,while facing markedly different challenges, from Delft to Hout Bay; Masiphumelele to UCT; Genadendal to Strand, blurred the often startling racial and class divisions of the Cape.

A common thread among the nominees and the winners was the deliberate design of their various programmes and interventions to address specific social needs and societal gaps.

For example, Watu Kobese, concerned about the declining status of African languages, wrote a book on chess in IsiXhosa, called uThimba. Thimba is the Xhosa word for chess. He was recognised on Wednesday with the Best Contribution to Language Development award.

Another recipient, Bulelwa Basse, decided to revive the spoken word and founded the Lyrical Base Project in 2006, taking poetry and its recital to primary and high schools in Cape Town. The project was awarded the Best Contribution to Literary Arts.

With parents working long days and often travelling hours to get home, the librarians at Masiphumelele in Cape Town, formed a Homework Club for children in Grade 3 to 7, with a group of retired teachers helping the children with their homework. The same library also runs a weekly English reading and writing class for Grade 0 pupils.

Those worried about the number of Matric passes for mathematics, will be delighted to learn that the librarians at Kensington Public Library have established a Mathematics Club, run by a friend of the library, who is also an MA student at Stellenbosch University, who helps youngsters in Grade 10 to 12 with their maths problems.

The finale was an enthralling performance by the Die Nuwe Graskoue Trappers, from Wupperthal in the Cedarberg Mountains, who were the recipients of the National and International Contribution in Arts and Culture Award.

As the annual cultural industries soiree of the Western Cape drew to a close, the air was filled with hope and optimism in spite of the stifling economic challengesSouth Africa faces.

Phumeza Mgxashe is a communications consultant based in Cape Town.

Image:  Bulelwa Basse of Lyrical Base Project was one of the 29 arts practitioners recognised on the night. She is congratulated by, left, Marlene le Roux, CEO, of ArtsCape and Anroux Marais,  Culural Affairs MEC in the Western Cape. Photo by Axel Unger.