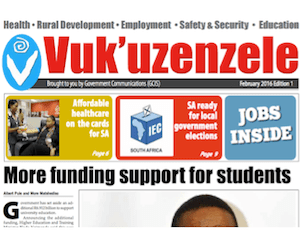 Government Communications and Information Systems (GCIS) will phase out most recruitment advertising from commercial media by the end of March this year. The adspend is worth over R400 million a year to South African newspapers.

Acting director general of GCIS, Donald Liphoko, said the move was in line with a National Treasury directive dating back nearly three years that all government departments needed to implement cost-cutting measures, and that state departments rationalise their adspend.

Liphoko said a ‘practicement’ issued by the Treasury in January 2014 advised departments of a procurement framework that would see recruitment advertising utilising the GCIS newspaper, Vuk’uzenzele, to advertise government jobs.

“Only two exceptions will be entertained,” Liphoko told The Media Online. “And those are ads for scarce skills and for very senior executive positions, such as directors general, as traditionally people are head-hunted for very high-level appointments,” he said.

Liphoko said national government had already started implementing the measures, but that a clause in a regulation regarding provincial departments stipulated that jobs be advertised in a national newspaper, hence the traditional use of the Sunday press.

But that regulation will be overturned by 31 March, meaning provincial communicators and human resources practitioners will now have to use Vuk’uzenzele too.

In a communication from a director general of a government department, seen by The Media Online and dated 5 February 2016, headlined ‘Advertising of Posts in the Media’, officials from the minister’s office down are told, “Taking into consideration the budget limitation of the department, I have requested that all departmental advertisements earmarked for publication in the commercial media immediately be withdrawn”. Officials were told that the placement of advertising in Vuk’uzenzele would be communicated to them following the next Exco meeting.

The DG said the move followed a letter from Liphoko in July 2015 in which directors-general in national departments and departments were requested to “implement the advertising of government vacancies by using the Vuk’uzenzele government newspaper”. This move, it said, was in line with “overall government austerity measures adopted by cabinet”.

That letter caused a storm of controversy, with media accusing government of using advertising as a stick to beat it with for being critical of the Zuma regime. But Liphoko denied the claims, saying “In the article, journalist Thanduxolo Jika misrepresents the facts and by doing so he has deprived readers of the newspaper the true story.

“His claim that recruitment adverts in government’s newspaper Vuk’uzenzele will cut mainstream media’s revenue by “tens of millions of rands a year” is in bad faith and seeks to damage the goodwill that GCIS, governments mandated media buying implementer has established with its media partners”.

Liphoko admits the finalisation of the withdrawal of recruitment advertising from commercial media is a “big shift” but, he said, “it makes economic sense”.

The now bi-weekly publication of Vuk’uzenzele would reach many more people than the commercial media, he said. It is a free newspaper which is published in all official languages and Braille.

Liphoko said GCIS appointed an advisory panel from advertising sector to help them rationalise spend in the communications sector. “We looked at how government buys ads and how much was spent on recruitment. We have also rationalised use of outside services, bringing down the number from 56 to seven (including ad agencies and public relations practitioners),” he said.

A successful pilot phase took place in October 2015. But it also showed that Vuk’uzenzele would have to increase frequency – from monthly to every two weeks – in order to reach candidates looking for jobs in the public sector.

Vuk’uzenzele was registered with the Audit Bureau of Circulations (ABC). “Vuk’uzenzele joined the ABC for Q3 2015 (distribution 1 696 450) only and then resigned. So, currently they are not members of the ABC,” said president of the ABC, Gordon Patterson.

Liphoko said the title didn’t need ABC accreditation as it was audited by the Auditor General and was only used as an advertising tool within government. “There’s no benefit for it to belong to the ABC,” he said.

Liphoko stressed the move was not to punish a commercial media critical of government, but a necessary means to cut costs as directed by national treasury.

The news comes in a dramatic week for media which saw new finance minister can the traditional post-budget breakfast hosted by The New Age in favour of eNCA and e.tv, a move seen as a snub to President Jacob friends, the Guptas, who own The New Age and 24 hour news broadcaster, ANN7.

“The Treasury confirmed to us that the Finance Minister was unable to attend the TNA business briefing as access to him must be shared out equally between broadcasters and that currently they are inundated with requests. We completely understand and respect this decision and look forward to welcoming Minister Gordhan to a TNA event in the future,” Nazeem Howa, director of the Gupta-owned Oakbay Investments told The Media Online via a spokesperson.

Prior to that, President Jacob Zuma, in his response to the State of the Nation Address debate, announced that tenders would no longer be advertised in commercial media, and that a tender portal would be initiated to ensure the process was transparent and open to all.

The major Sunday newspapers were approached for comment but had not responded at time of posting this story.