Challenges creating opportunities at the SABC

Posted By: Michael Bratton: May 03, 2016In: Broadcasting
Print Email 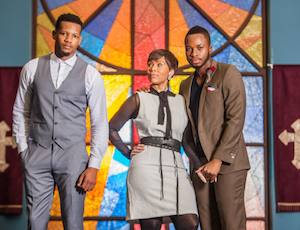 What is the national broadcaster’s strategy in changing times? Sales executives at the public broadcaster give some ideas.

The SABC is undoubtedly facing challenging trade conditions and emerging threats to traditional television. However, the clear message from Tshifhiwa Mulaudzi, GM of television sales, is that in a bid to counter perilous times, we can expect the SABC to continue delivering premium content in 2016.

Mulaudzi firmly believes that 2015 was the year the South African television market began to change and predicts that, “DTT will be accelerated in mid 2016 and 2017 and naturally that will bring its own dynamics and challenges”.

One of the major consequences of DTT will be further fragmentation of the landscape as more channels are introduced into the market. “This will impact established platforms,” Mulaudzi says.

Another issue which he points to is that audience measurement of these new channels might take a while to implement, and could result in many unaccounted for viewers.

Former GM of business intelligence at SABC Group Sales, Wanele Mngomezulu, adds that DTT will open up various opportunities and challenge traditional ways of broadcasting, both from a content generation and an advertising sales perspective.

Talking in-depth about DTT, Mulaudzi issued a cautionary note, not just for the SABC’s plans, but for every broadcaster operating in the South African market.

“First and foremost you have to strengthen your existing channels. With new channels, schedules need to be filled, so DTT has to be rolled out in a way that makes business sense – so, rather have less channels. You need to be certain that your core channels retain market share.”

He also explains that DTT could also pose a challenge for advertisers and media agencies as they will be forced to find new ways to make less interesting channels competitive.

Mulaudzi foresees more media owners becoming involved in media planning and buying in order to try and sell advertising on these new channels which may have little to no appeal for advertisers and media agencies.

An additional threat to traditional television comes from Over the Top (OTT) platforms but Mulaudzi is very excited about these possibilities. “Pay TV platforms now have a real competitor,” he affirms. Netflix recently arrived in South Africa as a new competitor to not only the SABC, but also to MultiChoice’s OTT offering, ShowMax.

Generally OTT offerings bring mainly foreign content to the market, which Mulaudzi reckons will give SA platforms a chance to do something different. “OTT platforms are missing local content. This continues to be a real opportunity for broadcasters.”

He reveals that the SABC is currently in discussions with a partner to offer an OTT service but stresses that they would rely on the partner to own, develop the infrastructure and run the platform, while the SABC would focus solely on providing content for it. This is because he believes that SABC is an expert in content generation, while its partner will be an expert in OTT platform generation. Mulaudzi confirms that the SABC’s head of digital is part of the development process and is currently working on the OTT platform.

For Mngomezulu, content is a prime issue. “One of the SABC’s key strategic positions is around content. Whatever the platform, our strategic approach is to focus more on the content and on making it universally available across all platforms. From an advertising perspective it’s about coming up with new models and approaches and ensuring that we offer best value to our advertisers,” he says.

Mulaudzi agrees. “2015 was not an easy year from an advertising perspective. And we see that continuing in 2016. Clients are cutting budgets but are demanding more and more media exposure.” This is due to advertisers cutting back on spending due to tough economic conditions alongside audience numbers dropping because of fragmentation.

“If you prioritise doing anything at all cost, you can sometimes easily devalue a business,” he cautions.

According to Mngomezulu, the SABC’s strategy is to find the common balance of being flexible with clients but at the same time protecting the business. He adds that the broadcaster has identified a host of opportunities to not only counter the tough economic conditions but also to assist advertisers.

SABC is targeting provincial opportunities and has revamped its content, including a revised SABC2 primetime schedule which was launched in February this year. However, the channel’s most popular programme continues to be old, fan favourite Generations: The Legacy. A massive investment in local content is taking place – this includes a new content rollout for SABC3 (Skeem Saam is the crown jewel of this channel) in September 2016.

SABC1 has an ongoing maintenance strategy. Currently, in a near perfect space, it is the broadcaster’s most watched channel and, says Mngomezulu, the most watched channel in South Africa, regardless of platform. It is also the channel that contributes the most advertising spend to the group, correlating with viewer numbers. A large majority of those viewers are drawn to the channel’s most popular programme, Uzalo.

So,why the content revamp? It’s to give viewers exactly what they want, so retaining and increasing market share, which in turn attracts advertisers.

From an advertising perspective, it’s important that the essence of the SABC brands is being communicated along with what those brands can offer in terms of ROI. Mulaudzi explains, “We are listening more to our advertising partners. We’re looking at their objectives and plans and partnering to benefit ourselves as well as them.”

Another key area on which SABC is focusing is the visibility of its brands. Soon, a new sponsorship approach will be rolled out.

Sports fans can also look forward to the launch of SABC Sport, a separate channel dedicated entirely to various sporting codes. While still in development, the SABC has secured some big broadcast rights which will be shown on its core channels, SABC1, 2 and 3. These include rights to cricket (the SABC has signed a three year deal with Cricket South Africa), which the broadcaster has not had for a long time, rugby, and the Rio 2016 Olympics.

Along with all the content developments, SABC is also changing the system it uses with advertisers. “Since ad spend has only grown by 4% between 2014 and 2015 and that trend is expected to continue, the situation is forcing everyone to think differently and for the SABC, especially around conversations with business partners,”Mulaudzi says.

From April 2015, advertising bookings will be allowed across all of SABC’s platforms from one system – a new development.

The broadcaster is also engaging around research. Mulaudzi adds, “In the confusion, our challenge is to work differently and have different conversations with our partners and strengthen those partnerships.”

It’s clear that exciting times lie ahead for the public broadcaster, as Mngomezulu says. “While it’s challenging, there are a host of opportunities.”

This story was first published in The Media magazine’s Television Annual. To read the magazine online, click here.