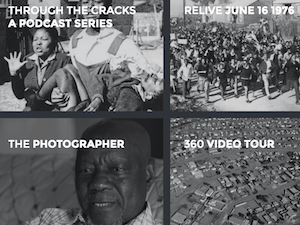 Youth Day marks the 40th anniversary of the Soweto Uprising and to mark the day, Eyewitness News has produced an extraordinary multimedia series, by award-winning investigative journalist Mandy Wiener and a team of journalists and producers, called ‘Through the Cracks: The untold story of Mbuyisa Makhubu’.

Investigative journalist Mandy Wiener, in a four-part podcast series honour June 16, tells the story of Mbuyisa Makhubu, the other young man photographed in the iconic image of a dying Hector Pieterson that has come to define the uprising. The podcast is accompanied by a multimedia production of images, video and the photographs of the uprising by Sam Nzima.

Katy Katopodis, editor in chief of EWN, says the channel’s storytelling philosophy has changed over the years due to their belief in “offering users an experience which they cannot get elsewhere”.

“We always look for new, innovative and captivating ways to tell stories. South Africa has so many remarkable stories and podcasting offers an opportunity to use the power of audio – to create theatre of the mind. Audio is an intimate, personal medium that encourages audiences to co-create content with us – they are imagining and picturing the story we are telling them,” she says.

“It’s a fantastic way of reaching people on a deep, impactful and emotional level. It’s also a natural area of experimentation for us as a lot of what we do on a daily basis revolves around rich audio storytelling. This kind of project exploits our skills as radio producers but allow us to play with longer format storytelling. Internationally, podcasts are a big trend and earlier this year Primedia Broadcasting launched a dedicated podcast channel, Life which already recorded 160 000 audio downloads, which shows there is an active podcast audience in South Africa too,” says Katopodis.

Wiener’s investigation into what happened to Makhubu is described as a “true South African story with all the drama and plot twists of a Hollywood blockbuster”. Wiener follows Makhubu’s journey from being the most wanted man in Soweto, into exile and to his disappearance in 1978. Much of it is untold, and Wiener believes there was a cover up that has lasted for 40 years.

“Through the Cracks: The untold story of Mbuyisa Makhubu is not being broadcast in its entirety on our stations, yet we are using carefully chosen snippets to tease and entice our audience,” says Katopodis. “We are also being strategic in our on-air approach and are also slowly rolling parts of the story out on EWN and many of the shows have taken a keen interest in the story.”

All four episodes of the four-part radio documentary have been released online at once to allow for binge listening. It tries to resolve the speculation on what happened to Makhubu. In 2013 it was revealed that a man languishing in a Canadian prison could be the iconic June 16 hero. “This tumultuous story is told through the voices of those who were close to Makhubu and through exclusive documents and archive images. This investigation also delicately uncovers a long buried family secret which may hold the key to whether 40 years later, Mbuyisa Makhubu has been found,” EWN says in a press release.

Katopodis says it was an expensive exercise and this took over a year to produce, including early research then interviews and further investigation and finally production both of the podcasts and the interactive site. “We do have these skills at EWN and Primedia Broadcasting and this project has really showcased what is possible when all the different teams and individuals work together,” she says. The team included field journalists, online production, audio production, the managers who have overseen the direction of the project, over 10 individuals have touched this project. Primedia chose not to look for sponsorship or advertising as it “was an important South African story to tell and as a news brand, we had to tell it”.

Katopodis says EWN has developed into a “multimedia, content rich destination where one can find everything from traditional articles to live blogs, video features, interactive infographics that explain a complex story, cartoons, and now podcasts.

How the story is told, she says, depends on the best medium to tell that story, and we do think there’s a growing audience for podcasts and audio on demand. “Also, audio is less data-intensive for audiences to download, so it’s more easily accessible to more audiences who have limited data, than video,” she says, adding that “EWN is always looking for powerful stories and creative ways to tell them. We have also received extremely positive feedback on this podcast series and we certainly intend doing more of this kind of work.”