LATEST NEWS
Home Research Generation Next: The children are our future…

Generation Next: The children are our future… 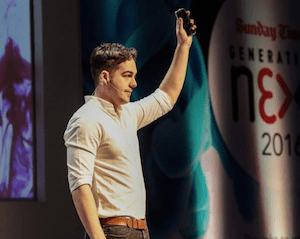 For the past twelve years, Times Media has delivered the “Sunday Times Generation Next” youth survey to the marketing industry. Trevor Omerod, GM Group Sales & Marketing at Times Media has pointed out that understanding the youth is an investment in the success and longevity of South African marketers’ businesses.

Last Friday saw a full day devoted to Generation Next, kicking off with the second Youth Marketing Conference. This was followed by an Interactive Showcase with suitably cool activations from brands such as M-Net Movies, Pringles, Converse, Super C, and The Walt Disney Company Africa. A red carpet arrivals event preceded the Awards ceremony, which in turn, was followed by the first alcohol free Youth Party, with local sensation AKA headlining the event.

Fortunately, I attended the Youth Conference in the morning rather than the full range of events so my stamina was not put to the test. Times Media Events have perfected an information packed conference formula. Succinct presentations and tightly moderated panel discussions meant that delegates could enjoy the input of over 15 insightful adult experts in the youth field as well as hear the thoughts of members of the HDI Youth Panel. A conference app sponsored by Lumi ensured easy audience engagement with the speakers and panel moderators.

The first highlight of the event for me was the ever-genial Ormerod opening the conference with his rendition of the Whitney Huston song, “I believe that the children are our future / Teach them well and let them lead the way…”

He handed over to HDI MD Jason Levin who gave an overview of the 2016 Generation Next Survey. The study covers youths aged 8 –22 across seven provinces balanced between coastal and inland, males and females and inclusive of all race group. Sub -segments are categorised into Kids (Primary school learners, ages 8 -13 years), Teens (Secondary school learners, ages 14 -18 years) and Young Adults (those who have completed their schooling, ages 19 – 22 years).

Besides looking at more than 70 product categories to determine which brands the respondents consider to be ‘cool’, the study also aims to capture the attitudes of the young consumers and understand youth habits and behaviour. Interestingly, HDI continues to carry out face-to-face interviews with respondents rather than opting for trendier digital methodology. Levin quickly underscored the importance of Generation Next who account for annual expenditure of R134 billion. The largest proportion of this (23%) is devoted to clothing, followed by education, transport, games and toiletries. It is, therefore, understandable that money tops the youngsters’ wish lists, but touchingly it is followed by a desire to spend more time with their families, to have more energy and to have the skills and talents they require to succeed.

(The audience was reminded later of the youngsters’ need for energy to navigate through the demands of this modern world. In a parent and child by Pepsi Pokane, managing director, Bonngoe Productions chaired a panel discussion between HDI junior board of directors and their parents. When asked what they would do if they had a day off from school, the youngsters were unanimous in firstly wanting to relax and recuperate, before catching up on responsibilities such as homework.)

Unfortunately, these youngsters living in a randomly dangerous world: their worst fears are losing their parents, being involved in car accidents, failing exams and, particularly disturbing, being raped. Given their desire for money, it is not surprising that they consider the the coolest job to be CEO (The Boss). It is still considered aspirational to be a doctor or surgeon, engineer, soccer player or lawyer.

Smarter than they look

Another highlight was the presentation given by Don Packett, head of perspective at Missing Link. He reminded the audience that the new generation is “smarter than they look” and that it would be wise for the older generation to not only let them speak but also to also to actually listen to them. Only then could marketers craft relevant propositions for them, and hope to “crack the youth”.

The charming and energetic Arye Kellman, show host and creative director at CliffCentral, highlighted the internet as the thing that divided the older and new generations. He pointed out that for Generation Z “the internet is not technology”, it is “just the way it was”. The power they hold is the phone in their hands; they are absolutely comfortable with this digital world and have not had to learn the millennial lessons of how to behave in this space. Reassuringly, he also stressed that every generation something to teach the other.

Kellman also hosted a panel discussion between Justine Cullinan, station manager, 5FM, Sylvester Chauke, chief Architect, DNA Brand Architects and Dan Calderwood, head of multimedia for the Times Media Group. This produced some valuable and succinct advice for marketers. Cullinan enjoined marketers not to simply “build a digital strategy, but to operate in a digital world”. Calderwood reminded the audience not to “underestimate the importance of digital video” This world is constantly changing and it is necessary to evolve with the change. Chauke advised that marketers should “stand against the bland” and also advised that if marketers wanted to understand the youth, they needed to actively engage with them and hear them.

Nike is a brand that has clearly taken that advice! I read in the Sunday Times Generation Next supplement on Sunday that Nike outran the rest of the field, winning not only the accolade of Overall Coolest Brand, but also the Coolest Clothing Brand and the Coolest Brand Slogan – just do it! Nike has won the last two accolades for three consecutive years, proving that the efficacy of being in touch with the youth.

On the side: The complete results

All the winners here: Sunday Times Generation Next Results

The accolade of Overall Coolest Brand was awarded to Nike, who also claimed top spot as the Coolest Clothing Brand with the Coolest Brand Slogan, just do it.  33 of the 72 survey categories were awarded at the event.

This year saw the addition of a new category acknowledging the Coolest ProudlySA Brand.  Happy maKhumalo Nigidi, Chief Marketing Officer of Proudly South Africa awarded the title to Nestlé. “We salute Nestlé SA for its investment in our country over the years – particularly for its investment in the local economy through skills development programs, job creation and through establishing local manufacturing bases in South Africa. Nestlé SA has made a tangible difference in the lives of millions of South Africans who have grown up with the brand,” said Ngidi.

The annual brand survey commissioned by the Sunday Times is conducted by HDI Youth Marketeers.  HDI MD Jason Levin said the 2016 results indicate that the “Youth are a market that know what they want, and respect brands that invest in their communities. They proactively seek brands that sell them experiences that they can share with their friends. They want to be immersed in stories and experiences that brands have to tell – as long as they have an opportunity to choose them. They respond to brands that enter their world to make it more interesting and add value.”

Technology giant Samsung cored the opposition to maintain its lead position as the Coolest Cellphone, as did Vodacom as the Coolest Telecomms Provider.

Spur served up another winner as Coolest Eat Out Place, with McDonalds proving that the youth are ‘lovin’it’ as Coolest Fast Food Place.

BMW drove off with bragging rights as Coolest Car.