Muhammad Ali: Mourning another great in the age of social media 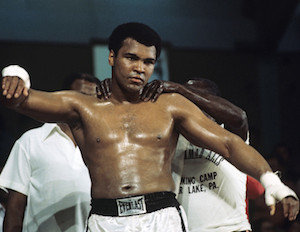 In their 1998 song Destiny Calling, British indie band James combined a satirical glance at the contemporary nature of media celebrity with a sense of the more mundane and ordinary: the grim inevitability of getting old.

Tim Booth and the rest of the band are happily still with us, but our relationship with the stars from screen, stage and sporting field has been marked by mourning in 2016.

Muhammad Ali is the latest public figure whose death has jolted us this year; the peerless boxer inspiring an outpouring of adulation and sadness. It has been a very rapid reminder of the similar response to the deaths of David Bowie and Prince. One Facebook message published in London free newspaper Metro neatly captured the experiences of a generation:

I feel my childhood is dying all around me – and it’s only April.

Celebrity might seem like a thoroughly modern and mass-mediated phenomenon, the desire for fame and recognition can be traced back through history. But the media landscape we live with today is a fascinating and distinctive opportunity to examine the heightened visibility and increasingly intimate relationship between the public and celebrities like Ali, Bowie and Prince.

At the 88th Academy Awards in February 2016, musician Dave Grohl took to the stage to perform Paul McCartney’s Blackbird in memory of the notable deaths of the previous year.

For 2015, The Hollywood Reporter noted in remembrance 152 names, including a range of different roles and contributions from film critics and music composers, to script supervisors and unit production managers. These “hidden roles” in media industries, which also include videogames testers, is vital for recognising the collaborative nature of creative production. Of course though, it is the big names and well-known faces that fill the headlines and are the focus for acts of mass mourning in public places and across social media.

Then there is news coverage. Under the title of “Culture stars who died in …”, the Daily Telegraph has published a photo essay for the last three years. There were 106 entries in 2014, 124 entries in 2015, and, at the mid point for 2016, 86 entries already. Rather than single out any particular individuals from these burgeoning lists, there is a more overarching set of questions we might consider concerning how we know celebrities, how these deaths can make us feel, and how these feelings are expressed and shared.

The significant public mourning of Princess Diana in 1997 attracted discussion from a number of perspectives. Of particular note was James Thomas’ book Diana’s Mourning, in which he addressed the extensive news media coverage alongside accounts of “ordinary” people collected as part of the Mass Observation project. Thomas’ research revealed greater ambiguity in public responses than the dominant news representation of a nation in mourning seemed to allow for.

This ambiguity was also apparent in research I undertook with Rebecca Feasey of Bath Spa University which explored the death of reality TV celebrity Jade Goody in 2009. Similarly, our research involved 32 focus groups with over 100 members of the public and revealed a range of public responses to Goody’s mediated illness and dying. For some Goody was “ordinary” and “one of us” and helped to provide much need attention on cervical cancer. For others, the trappings of celebrity meant that her illness somehow seemed staged and lacked authenticity.

The ambiguity of our responses perhaps comes from the impression from media coverage that we must have a response at all. Social media makes it so very easy to display that response, however fleeting it might have been. News that Ali had died prompted responses from millions. US president Barack Obama led the social media grieving; presidential hopeful Donald Trump tried to join in, not without controversy.

As we have seen this year, we are not short of prompts. The celebrity firmament continues to expand as pioneers of an era of immense cultural output and sporting achievement reach their late middle age and beyond. In the midst of it all, it is no surprise that we are using social media to create new forms of mourning.

In discussing death and Facebook, Margaret Gibson suggested that messages of remembrance and grief posted to the social media platform were “non-hierarchical”. Family and friends and other members of Facebook (members of the public more generally) are on a level playing field. Their expressions of grief circulate online alongside those from family and friends. Obama’s tweet about Ali is just as big as yours, even if his gets more retweets. One element of this is access. The mourning of celebrity is not limited to particular groups or particular places. As such, an abundance of voices mix together in memory.

Such expressions of remembrance and mourning are also specific to emerging media forms. People might circulate animated GIFs or playlists, as they have done for Bowie and for Prince. They might create hashtags on Twitter and Instagram. These are user-generated acts of mourning that extend public memory beyond dominant news coverage and create opportunities for everyday and expansive celebrity mourning. One key question is whether this has now become endless. Will there be room to memorialise everyone, even with our new forms?

Forms of remembrance and mourning differ and extend across different countries, cultures and time. Social media can be added to this repertoire of ways to share memories and connect experiences. Beyond the obituaries published in newspapers, the showreels that appear at award ceremonies, or the “and finally” announcements at the end of television news, digital media presents ways in which an abundance of voices can be heard. There are then questions of “information overload” – who gets heard, when and how? Perhaps with mourning though, this matters less than the opportunity for personal, ordinary and everyday remembering.