LATEST NEWS
Home Agencies Communications Candidates control their own social media. What message are they sending?

Candidates control their own social media. What message are they sending?

Posted By: The Conversationon: July 29, 2016In: Communications
Print Email 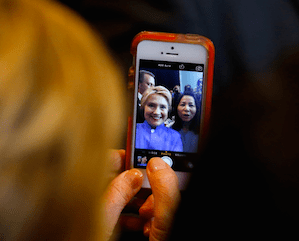 We live in the age of social media. Indeed, many of us likely saw something about the Republican and Democratic conventions on Facebook, Twitter or even Instagram over the last few weeks.

A recent Pew Research Center study finds that the public is getting more of their news this election cycle from social media than ever before.

This finding makes sense since 87 percent of the American public is on the internet today. Over 70 percent of those internet users are on Facebook. Although only about 20 percent of them are on Twitter, journalists and political commentators are heavy users. So, Twitter impacts much of the news and information the public sees.

In light of these enormous changes in the way Americans get their news, it seems reasonable to ask: What is the public getting from the campaigns on social media?

Ideally, presidential campaigns provide the electorate the opportunity to reflect on the issues that face the country. The best campaigns for our democracy are ones where the candidates offer clear, detailed policy positions. The public can then evaluate and choose which candidate they think will best serve their interests as president.

As we shift out of the primaries and conventions into the general election, our project, Illuminating 2016, analyzed social media messages from Republican nominee Donald Trump and Democratic nominee Hillary Clinton to see how they used Twitter and Facebook during two phases of the campaign season.

The first stage ran from October 2015 through January 2016, when the candidates began to introduce themselves and their positions to the public. We call this the surfacing stage.

We also looked at the primaries stage from February through June 2016, when each state’s Republican and Democratic parties held caucuses or primaries to pick which one from the many candidates running should be the eventual nominee.

How we did the analysis

We use computational approaches to analyze the text of the messages. Analysis activities include creating a set of categories to describe the social media messages, having two or more people read a sample of the messages and tagging them with those categories, and then using computer software that identifies patterns and features in messages that share the same category. The software then generates algorithms or a set of rules that specify what features to look for in messages to assign them to the proper category.

People agree about 70 percent of the time when they categorize samples of the candidates’ social media messages. Our algorithms, by comparison, are more accurate than people. They are correct between 75 and 85 percent of the time (depending on the category).

The benefit of algorithms is that we can efficiently categorize all of the candidates’ messages rather than using samples, and the algorithm is consistent and less likely to be influenced by subjective perceptions that humans naturally bring to communication analysis.

Our analysis suggests that the public is not getting from the candidates what they need to make a good judgment of who should be president.

There are stark differences in the ways Clinton and Trump used social media to strategically construct their vision for the country.

Clinton often produced almost three times as many messages as Trump about the issues, such as education, the economy and women’s issues.

The style of Trump’s posts on the issues is distinct when compared with Clinton. Where she routinely provided reasons, facts and statistics in support of her positions, Trump offered broad generalizations or generic claims with little evidence to back them up.

Take for example, these posts from Clinton on Twitter:

By comparison, Trump’s positions were declared rather than reasoned. Additionally, he often retweeted messages from supporters instead of articulating his personal stance on issues:

Trump is not consistently negative

Political pundits and campaign watchers have declared Trump to be profoundly negative. The New York Times even documented all of the people he has insulted on Twitter. Some have predicted this might be one of the most negative campaigns in history. But when you look in aggregate rather than anecdotally at each candidate’s individual social media posts, you get a different picture. During the surfacing stage, when the candidates need to introduce themselves to the public, Trump advocates for himself more frequently than does Clinton on Twitter, and he attacks more, but not disproportionately so. The same pattern holds for Facebook. When you look at the primaries, though, a noteworthy change occurs. Clinton attacks more than Trump on Twitter, especially during February, March and April, when she attacks at nearly twice the rate. It’s not until May that Trump goes on the attack – primarily against Clinton. This coincides with Trump becoming the presumptive nominee for the Republicans when his rivals ends their campaigns. Once he starts to attack Clinton, he stays on the attack in June. When you look at the substance of the attacks, there are noteworthy distinctions. When Trump goes on the attack, his attacks are often personal. In February, for example, when the voting begins, Trump primarily attacks Bush, but Rubio and Cruz are not spared.

By contrast, Clinton’s attacks in February and March are more subtle. She doesn’t name Sanders explicitly in her attacks but instead calls out weaknesses with issues he is advocating. By April, she begins actively attacking Trump, where she does get more blunt in her critiques, but does not turn to consistent pejorative labelling.

With the public increasingly turning to social media to get their news about the campaign, the candidates, especially Trump, fail to give them the breadth and depth of policy positions to make meaningful judgments about who is the best candidate to lead the country. Nevertheless, while Trump provides only thin policy claims, he is not constantly on the attack, unlike the public perception of his Twitter stream. Indeed, Clinton tends to be more negative than Trump on social media.

Negativity is not necessarily toxic to democracy, though. The style of the attack matters. When candidates attack their opponents on the issues, it helps the electorate potentially gain a different perspective on the policy solutions or stances of candidates. They should spend time critiquing the positions of their opponents, as that helps our elected officials be accountable for their past legislation and their future plans. But, when candidates belittle or demean their opponents solely on issue or character, that alone is not enough for the electorate to make a good judgment.

Image: Hillary Clinton takes a selfie – not her first or last. REUTERS/Mike Blake