LATEST NEWS
Home Broadcasting Television ‘The Oscar Pistorius Interview’: Are we being manipulated? If so, by who?

‘The Oscar Pistorius Interview’: Are we being manipulated? If so, by who? 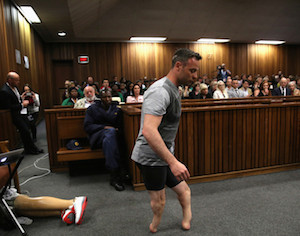 Oscar Pistorius is being re-sentenced on 6 July for the murder of his girlfriend Reeva Steenkamp, on Valentine’s Day in 2013. He was recently interviewed – the only one he has given since Steenkamp died – in a UK television documentary.

Convicted murderer and paralympian Oscar Pistorius’s first interview since the death of his girlfriend Reeva Steenkamp in 2013 was broadcast in late June 2016. Called “Oscar Pistorius: The Interview”, it is generally referred to in the mainstream media commentary as an “interview”. However, it takes the form of a presenter-driven investigative television programme or documentary that includes several interviews with Pistorius, interviews with others and archive material.

After the broadcast, Pistorius was criticised for being insincere and manipulative. The way the programme was filmed, edited, and structured influences the way a viewer “reads” the piece, however. This “reading” includes whether or not Pistorius is being sincere and truthful.

Structural analysis shows that the documentary was crafted using a three-act structure, carefully composed shots and continuity editing. This engages the audience in a story that is part human drama, part thriller and part scandal.

It’s clear when watching the documentary that separate interviews were conducted with Pistorius in at least four different locations. Each interview seems to centre around a different topic: a retelling of the events of the night Steenkamp was killed, reflections on the legal process and details of Pistorius’s abilities with and without the use of his prosthetic legs.

In the most emotional parts of the interviews he relates the events of the evening of Steenkamp’s death. This central interview includes Pistorius crying when he talks of the moment he realised Steenkamp was dead.

The moment, placed about halfway through the documentary, is a hallmark of the three-act structure used for fiction and non-fiction films. This so-called “midpoint” is designed to engage the viewer by providing a climax halfway through the piece; it draws the audience in.

When examining the cinematography and editing of this interview a few characteristics stand out. There are two angles of Pistorius, one in which he is shown from the side, almost in profile, and another almost directly from the front.

Shot sizes vary between a loose and tight head-and-shoulder shot in the profile angle and a tight close-up in the front angle. In both these angles and that of the interviewer, investigative journalist Mark Williams-Thomas, the background is slightly out of focus, drawing the viewer’s attention to the faces of the two men.

The moment when Pistorius cries is shown in the front angle, in a tight close-up. This is the most intimate of the ways in which Pistorius is framed in this programme. It is a composition usually used to draw the audience closer to the subject. It is used to elicit sympathy or imply that the audience has a close relationship with or privileged access to the subject.

Pistorius’s background in the central interview is light: an off-white wall and windows with horizontal blinds swivelled to let light through. Williams-Thomas’s background is much darker, with no detail discernible. This signifies that they are opposing forces, approaching the subject matter from different angles.

When Williams-Thomas is shown on screen during this interview his expression is almost without exception neutral, almost stern. From about the midpoint his tone is more overtly antagonistic. He appears to interrogate Pistorius more, signifying his vigour in investigating the case.

These are structural and aesthetic signifiers, however, and do not prove anything regarding Williams-Thomas’s journalistic integrity or objectivity. He is a former police officer and this could all be part of how he is characterised for the show, devices used to create his onscreen persona.

Some have criticised Pistorius for sounding rehearsed in his retelling of events. That may be true, as he has told his story numerous times since the shooting, including to his lawyers and during his trial.

The way that the events are related in the programme avoids contradictions and provides explanations for seemingly unmotivated actions, including the ones that were pointed out based on his court testimony.

Pistorius’s retelling here is so careful and clear it seems almost scripted. But it is impossible to tell whether this impression is a result of how he told the story in the interview, or of how that retelling was edited. It is also impossible to say which parts he included voluntarily and which were in reaction to the journalist’s prompting.

A drama in three parts

The documentary as a whole follows a conventional broadcast documentary formula, based on the three-act structure.

In the first of the three acts the character is introduced, the situation and problem are sketched and the dramatic question is posed: was this premeditated murder? It should also be noted that moments from the most emotional part of the interview are included here.

It is a convention of television documentary to offer a few shocking or contentious moments from later in the piece at the beginning to entice the audience. In this case, because we see Pistorius’s breakdown before we hear the conversation that preceded it, the display of emotion can seem unmotivated and insincere. It is quite possible that Pistorius’s emotion would be read differently if the viewer were to see the full interview in chronological order.

As the middle part of the documentary – the second and longest of the three acts – unfolds there are several developments. The character reveals more information. The viewer is drawn in through these revelations, archival footage, perspectives from experts, the inclusion of rather graphic crime scene photographs and the questions and statements of the journalist.

There are moments that verge on melodramatic, in particular when the shot of Pistorius breaking down is held without cutting until after he covers his face with his hands. There are also moments that are sensationalist. These include a scene in which Williams-Thomas instructs Pistorius to take his prosthetic legs off to demonstrate how he walks on stumps. There is also the repeated cutting to bloody crime scene photographs.

There is a shift to the third and final act at about the point where Pistorius’s reflections on his sentence are included. Here he reiterates that the killing should be regarded as accidental rather than premeditated. He also makes what seems to be an appeal for a lesser sentence.

This is the point at which Pistorius appears most insincere and calculating, as he seems to offer to do philanthropic work instead of serving the full sentence. One can speculate about whether this is intended to influence the perceptions of viewers, or perhaps even Judge Thokozile Masipa, who was scheduled to sentence Pistorius within two weeks of the broadcast.

One can speculate about whether Pistorius offered these perspectives voluntarily or whether they were responses to specific and leading questions from Williams-Thomas. It is doubtful that anyone but the producers of the programme will ever know. But it is significant that Pistorius agreed to be interviewed now, and that the programme was broadcast so close to the sentencing.

Ultimately it’s impossible to ascertain through structural analysis whether Pistorius was truthful in his retelling of events. The viewer’s perception of his honesty is coloured by the way the programme was constructed and by pre-existing knowledge of the events and trial.

I expect there will be quite a bit of debate about whether we can or should believe what Pistorius says. Speculation will certainly turn to the documentary’s possible influence once Masipa announces Pistorius’s sentence, regardless of what that sentence might be.

Featured image: Oscar Pistorius walks without his prosthetic legs at a recent hearing at the Pretoria High Court. Siphiwe Sibeko/Reuters