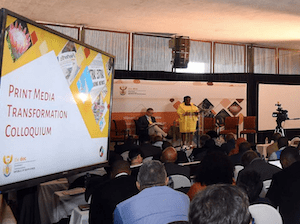 Ironically, it was mainly after lunch at 2pm, when attendees and panellists were supposed to be tired, that the Colloquium on Print Media Transformation, Accountability and Diversity, held at the Freedom Park, Pretoria, last week, came alive with intense ideological debate. Before then, the Colloquium had largely been about South African media history, with references to the principles of the Constitution, research reports, expectations, and promises.

The first mention of South African media history came from the organisers themselves, the department of communications (DoC), represented initially by the acting director general Ndivhuho Munzhelele, who made opening remarks, and then a little later by the minister, Faith Muthambi, who gave a keynote address. Using as background the dark history of the relationship between media and apartheid, Muthambi sought to assure the attendees that the governing ANC-led government draws its frame of reference from the SA Constitution and, as such, it would do nothing to undermine freedom of the media and speech.

Then she pointed out that she expected the Colloquium not to be just another talk-shop, but one that works towards creating a diverse media in terms of ownership, content and the entire value chain.

Another ‘history’ came from Mathatha Tsedu, the South African National Editors Forum (Sanef) executive. Tsedu presented the history of interactions between various stakeholders with respect to media transformations. Tsedu drew from the Print and Digital Media Transformation Task Team (PDMTTT) research report (online), which he headed during the term of the investigation. Other reports then followed.

Reg Rumney, a well-known economic journalist and an academic, presented his DoC-commissioned report on media ownership patterns in South Africa and challenges within newsrooms, which pointed to print media newsrooms that are under severe financial strain. While Rumney looked at local media ownership patterns, Professor George Angelopulo of Unisa, reported on international trends in media ownership and control. Both had findings that painted a picture of media that continues to be largely owned by few conglomerates.

Lighting up the Colloquium into an intense ideological debate, though, were presentations on print media regulation. Joe Thloloe, a veteran journalist and the executive in the Press Council, and William Bird, a director at Media Monitoring Africa, who presented on behalf of IAB-SA, were on the same side. They advocated for co-regulation, a system where print media is regulated by a council made up of members drawn from media and the public.

Lumke Mtimde, a senior media strategist with USAASA, was on the other side of this debate and advocated for independent regulation. For Mtimde, the current form of co-regulation is heavily biased in favour of the media rather than the public, and potential media victims are weak in terms of fines it can ever impose on a media house for ethical transgressions. These views were vehemently rejected by both Bird and Thloloe.

Coded in this debate were, peculiarly, South African issues of racism, double standards in the treatment of black and white news subjects, and monopolistic media ownership patterns. It is these issues, including lack of sufficient government support, that Piet Rampedi, of the Forum of Journalists for Transformation, took heed on.

While Rampedi had focused on the racial, ideological and political economic aspects of transformation, Advocate Lindiwe Madonsela, of Compliance Division, B-BBEE Commission, focused on the technical aspects of what media companies could do to transform. Of these media companies, the advertising ones had been found wanting Odette van der Haar’s (CEO of the ACA) presentation.

Despite all of this, it was once again media regulation that was the most heated subject in most of the breakaway commissions that debated on the second day.

Dr Musawenkosi W. Ndlovu is a Senior Lecturer in media studies in the Centre for Film and Media Studies (University of Cape Town).