Reality TV has had an extreme makeover in Soweto 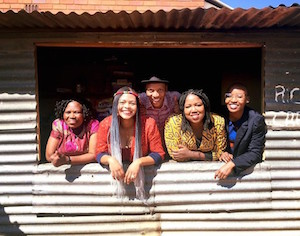 It’s one thing to philosophise academically and another to put all of one’s theory into practice. In my PhD thesis I devise a deliberative (and theoretical) talk show model based in ubuntu.

Commonly understood as “I am because we are”, this South African humanist philosophy or world view of ubuntu is collaborative in nature. It lies at the core of the country’s reconciliatory stance and its transition to democracy.

How do these carefully crafted and academically ‘sound’ arguments translate into tangible action from which we learn and through which we evolve? Questions like these have motivated my latest project – a reality makeover TV show based in South Africa’s largest township Soweto – that eschews conflict and sensationalism. A contradiction? Maybe. The programme is somewhat in the ballpark of ‘deliberative’, ‘cohesive’ and ‘harmonious’ – key attributes of ubuntu.

Why such a reality show has taken me so long to develop has of course something to do with the political economy of advertising-financed media. The ‘shock value’ of oppositional spectacle a la Jerry Springer is often seen to be more entertaining and lucrative than the more sober approach I’m suggesting. A lot of my pitches are turned down as “too earnest” – in the words of one UK broadcaster. Instead, such entities feel pressured to increase profit margins by favouring dramatic content that appeals to larger volumes of viewers, which ultimately pleases advertisers.

Yet occasionally we also witness alternatives in the mainstream. One example is Extreme Makeover Home Edition that originally appeared on ABC television in the USA. It displays no real conflict or contention. If anything, the show appears to be deeply collaborative in nature.

In Extreme Makeover, a design crew appears at the door of a deserving family and builds them a new home in five days. The programme is not structured as a contest but rather as a joint effort. Often a team of construction workers from the community volunteers to help out while a disempowered family gets a much deserved spa treatment or vacation.

However, even in this case ‘spectacle’ takes a central role. While it does offer a refreshing alternative to its more explicitly competitive counterparts and warrants attention as a pioneering format, the show’s deeper conceptions of power are not entirely unproblematic. They suggest that power is something to be ‘had’ and in the best case ‘bestowed’.

In the show, a group of people in possession of a lot material power (materials, financial resources, time, etc) arrives to help a materially disempowered group of people. The former then build the latter a truly extravagant home that is often incompatible with their means and particularly the social realities of the overall neighbourhood.

Furthermore the long term (financial and emotional) sustainability of the entire extravaganza is highly questionable as reports of post-makeover disasters surface.

Sustainability of the extravaganza

In looking to evolve this format, I’ve co-devised a programme that hopefully introduces a very different conception of power, where power is ‘co-created’ and mutually empowering. Motivated by this ubuntu -inspired conception, my team and I have created a very ‘un-extreme’ makeover show that contrasts the above example.

The show is currently in production and the (American) channel understandably prefers detail – like its title – to be made public only on completion. The show follows a group of (black) South African designers, with roots in the townships, who do very humble makeovers on shacks and dwellings in various parts of Soweto.

The production team identifies entrepreneurial families and individuals who are already doing much to help themselves. These include local tailors, hair salon owners, convenience store owners, tour operators and B&B providers. Our design team consults with these individuals to see how their space can be optimised, the flow improved and design elements added that are locally sourced, recycled or up-cycled.

Rather we try and celebrate what people are achieving and examine how they can take their successes up a notch. This involves employing a host who is from the area and speaks the local languages. The host respectfully and effectively explores business coaching strategies together with the people we film. The design team then works with them and the greater community to implement the changes we hope others will feel inspired to replicate.

Sounds good? Maybe. A critic has pointed out that I am non-African as a producer and that our broadcaster is in fact American.

These are potential pitfalls for authenticity. My biggest fear remains that the show might end up “flat” because (apart from the aforementioned criticisms) we’ve tried to make all the “right” rather than commercial choices. We haven’t gone with the freakiest characters, we haven’t deliberately implanted conflict and we don’t even have a massive budget to “wow” viewers by delivering a spectacular do-over (of course for good reason). Another fear is that things fall apart after we leave the families.

So, we have a strategy to carry out modest modifications to the spaces we re-design and plan to stay in touch with each family beyond their episode. It is, as we discover, uncharted terrain.

But one thing I do have is the enthusiasm of those who hear about the show, those who are participating in it and most importantly the commercial network that has commissioned it. This gives me the hope and confidence that times are changing and that networks are venturing beyond the confines of established paradigms, giving producers like myself the chance to try new things and “walk the talk”.

I tend to believe that our contemporary preference for spectacle and conflict reflect a commercially cultivated taste that is culturally and historically contingent. But I believe it can be altered if given a chance. If we assume, as ubuntu suggests, that we are fulfilled when we contribute to collective advancement, then exposure to this kind of thinking may well change the viewing habits of a crucial mass of people. If that happens it will allow people like me to talk less and do more.