No need to talk trash: Alternatives to the Jerry Springer talk show model 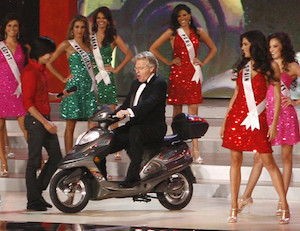 In today’s world we learn about many issues through Facebook, Twitter or the media more generally, rather than by direct or personal experience. As such, social and mass media significantly shape and influence our perceptions. One of the more subtle ways in which this happens is through the depiction of the world as “a war” of words and images.

From Facebook posts to news programmes or reality shows, one side frequently battles it out with another. This is epitomised in a great number of (especially American) daytime or “tabloid” talk shows, where human relations are often portrayed as being inherently conflictual. Extreme examples include the Jerry Springer Show, with its lurid trysts, while a subtler one would be the Tyra Banks Show. Such programmes often focus on drawing out interpersonal conflict.

Talk shows can be a space to explore all kinds of topics that are of interest. They’ve been key in offering a platform for controversial or marginalised issues and members of society. Parallels can be drawn to print tabloids and “trash journalism”, where media studies professor, Herman Wasserman, suggests that the tabloid format is in fact more democratic. In a similar vein, talk shows can be seen to represent “the people” more accurately than news analysis or political programmes, though often earning them the less charming title of “trash TV” for overemphasising conflict.

Talk shows exemplify one prevalent way that communication pans out, particularly in the West. Often, two or more camps are formed. Each side presents and defends its position while challenging or even denouncing the “other”.

For example, “stay-at-home moms” are pitted against “working moms”, implying an inherent conflict of interest between “equality” versus “child care”, as an episode of the Tyra Banks show once did. This adversarial model of communication is often replicated in other parts of the world, including the Middle East.

This type of what journalist and scholar Deborah Tannen calls “argument culture” became influential with the ascendancy of Western liberal thought. According to her, it has successfully challenged and confronted oppressive, authoritarian systems but may not be entirely unproblematic.

Its agonistic emphasis excludes many less aggressive or argumentative voices. It reduces issues into binaries, failing to address their full complexity. It also obscures facets of discussion where common ground often does exist. For example, in many cases talk show guests do agree and game show contestants suddenly cooperate. This became particularly apparent in the first season of Endemol’s Survivor South Africa, where contestants took a significantly more collaborative posture towards their tasks than their American counterparts.

It would then be compelling to explore what would happen if we engage in a form of public discourse that deliberately draws out collaboration. What if there were common ground between “stay-at-home moms” and “working moms”? As a mother who spends a lot of quality time with her child and still manages to carve out a meaningful career, I am compelled to investigate the efficacy of such framing.

In many such societies like South Africa, globalisation has involved bringing in Western liberal democratic values and systems. They include discourses on human rights or justice that are at odds with local realities.

So the question becomes what would communication look like if it were to meet the needs of highly diverse and fully interdependent societies?

In the case of South Africa, a collaborative approach already lies at the core of its reconciliatory stance and its transition to democracy – one that could also inform mass-mediated public discourse. The cultural value associated with it is ubuntu.

Commonly understood as “I am because we are”, ubuntu is collaborative in nature. It has been articulated as one of the key philosophies underpinning South African governance and service delivery. While this does not always successfully translate into practice, probably because it has been forged within and subordinated to an adversarial (Western) cultural context, where a conflictual view of the world is naturalised, it has still prevailed in shaping a reconciliatory South Africa.

As such, ubuntu is relevant for exploring a collaborative model of public discourse. What would a talk show model based on a harmonious, cohesive understanding of power look like?

Would it be sexy enough to capture the imagination of an audience that has developed a taste for adversarial spectacle through an advertising-financed media that deliberately cultivates a taste for “junk food” media? Can we (also) cultivate what may be termed “deliberation culture”?

While these questions remain to be explored more fully, elements of such an alternative approach can already be found throughout the media landscape. It characterised a large portion of the South African Broadcasting Corporation’s 3 Talk with Noeleen. Noeleen Maholwana-Sangqu’s guests consisted of a participatory panel that explored a rather open-ended approach to framing (for example, “when is the right time to get married?”). It was telling of significantly alternative cultural sensitivities in South Africa.

Such an alternative model engenders a deeply relational process. It would be inspired by the cohesive attitude of ubuntu and the way traditional African democracy operates in the form of a “deliberation”, where every person gets an equal chance to speak up until some kind of cohesion is reached. Geared for an increasingly distracted television audience, this would entail careful planning. Facilitation by an intelligent host would draw out and develop the presented ideas for arriving at a collective conclusion. As Maholwana-Sangqu showed us, at least in part, this is possible in a 40-minute time frame.

In this age of extreme inter-connectivity, a harmonious, cohesive and relational approach may be better suited to facilitate a successful way to communicate. 3 Talk with Noeleen played a significant part in opening this conversation. In many of its episodes people from vastly different cultural, religious and socioeconomic backgrounds came together. They explored and contributed – and in the process they empowered audience members to make up their own minds about life’s big questions rather than persuade them of what is right and what is wrong.