LATEST NEWS
Home Broadcasting Television Sex on TV: Less impact on teens than you might think

Sex on TV: Less impact on teens than you might think 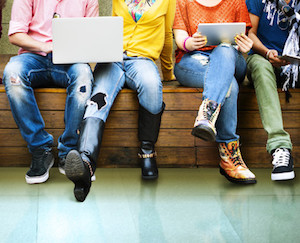 Few people would doubt that sex is ubiquitous in media – whether movies, television, music or books – and that teens today have unprecedented access to all of it. It’s often taken for granted that this easy access to “sexy media” has an influence on teenage sexuality.

Specifically, the worry is that teens may have sex earlier or engage in higher-risk sexual activities such as having multiple partners or exposing themselves to potential pregnancies or STDs. In 2010 the American Academy of Pediatrics even published a position paper claiming that sexually explicit media could promote risky teen sexual behaviour.

But government data find that teens are actually waiting longer than in the past to have sex. And teen pregnancy rates are at historic lows. How is it possible that sexy media has such a pernicious effect even as teen sexuality is becoming healthier?

I’ve spent more than a decade researching how media – like video games or advertising – influences youth behaviour. What fascinates me is how society interacts with media, often embracing salacious content while simultaneously blaming it for societal problems, whether real or imagined.

So my colleagues and I decided to look at the research on sexy media and teenage sexual behaviour to see how the strong the link between the two is.

Despite the common assumptions about sex in the media and its alleged effects on teens, the evidence behind the link is weak. Some studies find evidence for a small effect (perhaps in some circumstances but not others), while others find no evidence for any effect.

One reason the evidence may not be conclusive is that there are practical and ethical limitations to conducting research. We can’t run experiments where teens watch different TV shows and we wait around to see who has sex. This means research often relies on self-reported data. What we do is ask teens to report on their sexual behaviour and their media preferences, as well as other variables we might like to control for (such as personality or family environment) and see if correlations exist.

With this in mind, my colleagues Patrick Markey at Villanova and Danish researcher Rune Nielsen and I conducted a meta-analysis of 22 studies with over 22,000 participants that examine the correlation between sexy media and teenage sexual behaviour. A meta-analysis lets us look for commonalities in the results, and is something that had not been done previously with this pool of research.

All of the studies in the meta-analysis looked at depictions of sexual situations, nudity, partial nudity or explicit discussions of sex in television shows or movies easily accessible to minors (and thus excluded pornography).

In particular, we were curious to see whether sexy media predicted teen sexual behavior once other variables had been controlled. For instance, maybe boys tend to watch sexier media and also are more sexually risk-taking. Or perhaps youth who are more liberal in terms of personality are more open both to sexy media and earlier sexual initiation. Perhaps a difficult family background is the underlying key to understanding any correlation between media use habits and actual sexual behaviour.

Ultimately, this is what we found. Once other factors such as family environment, personality or even gender were controlled, sexy media exposure did not meaningfully correlate with teen sexual behaviour.

Contrary to common fears, sexy media doesn’t seem to have any practical significance for when teens first have sex or start other sexual behaviours. This lack of correlation is a warning sign we might be on the wrong track in trying to blame media for teen sexual risk-taking.

There are numerous theories that discuss how individuals and media interact. However, many older media effects theories didn’t consider why people were drawn to media, how they processed it, or what they hoped to get from it. Such theories assumed viewers simply irrationally and purposelessly imitated what they saw. Most of the papers we examined in our meta-analysis were tests of these basic, automatic, media effects theories.

In the past few years, some scholars (myself included) have specifically called for the retirement of these older media effects theories. This is because the evidence increasingly suggests that fictional media such as feature movies or sitcoms media is too remote to have a clear impact on consumers’ behaviour, especially compared to families and peers.

In addition, emerging evidence suggests that young children process fictional media differently from real events. If small children are able to process a difference between fictional events and real events, we can assume that teens don’t really expect media to reflect reality.

Our results regarding the limited impact of media also fit with the observations from societal data. Despite a plethora of sexual media available to teens, a crisis of risky teen sexual behavior has not emerged.

Newer models of media use suggest that it is the individuals who consume media, not the media itself, who are the driving agents of behaviour. Evidence suggests that users seek out and interpret media according to what they want to get from it, rather than passively imitating it.

People don’t generally accidentally watch media, sexual or otherwise, but are motivated to do so because of pre-existing desires.

For instance, some recent studies have indicated that youth seek out media that fit with preexisting motives, called a selection effect, but that media don’t necessarily lead to further problem behaviours. For example, research suggests that some teens who are already aggressive might be interested in violent video games, but playing such games doesn’t make kids more aggressive.

That’s a point that sometimes seems ignored when we talk about teens and sex. Interest in sex is a largely biologically motivated process; fictional media really isn’t required. Teens will become interested in sex all on their own.

Parents have more influence than the media

Parents can rest a bit easier since the evidence suggests that media isn’t a primary driver of teen sexuality.

To the extent media has any impact at all, it is likely only in a vacuum left by adults reluctant to talk to kids about sex, especially the stuff kids really want to know.

How do you ask someone out on a date and how do you handle it if they say no? What does sex feel like? When is it OK to have sex? What are the risks and how do you avoid them? In the face of patient, empathic and informative discussions about sex by adults kids trust, the media likely has little influence.

Ultimately, whether media have salacious or more conscientious portrayals of sexuality, we should not expect media to replace conversations with youth by parents, guardians and educators.

I’m not suggesting everyone run out and buy ’50 Shades of Grey’ for their teen, but if teens happen to come across it (and they will), it’s not the end of the world.

The important thing for parents is to talk to their kids.

Tags: sex on TVteenagers and mediaTV sex impact on teens