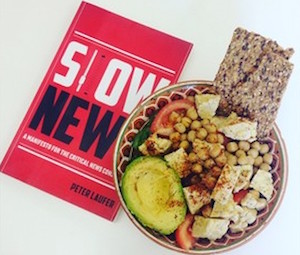 Inspired by the Slow Food Movement, which aims for quality food, produced in a way that doesn’t harm the environment, is accessibly priced, and gives a fair return to its producers, Peter Laufer, an award-winning author, journalist, and broadcaster launched his Slow News Movement – a “healthier approach to journalism”, offering the audience a balanced and nutritious news diet.

‘Yesterday’s News Tomorrow’ is what slow news is all about, eliminating the sense of urgency to allow both readers and journalists some valuable time to ruminate.

The approach is a push-back against the speed-up that crept up on the industry, as news organisations figure out how to deal with the disruption to traditional revenue models, Laufer told the World Editors Forum.

In many newsrooms, journalists have to juggle many things at once: social media posts, videos, podcasts, blogs, TV and radio reports – all aimed at satisfying the hunger for more content that appears to be news.

“Just doing more noise on more platforms doesn’t serve the journalist at all,” said Laufer, who believes that forcing reporters to work at an “all but accommodatable speed” led to the checks and balances of journalism getting lost in the shuffle.

A conversation with a journalist friend stuck in his head. He told Laufer that he had to do so much these days that he no longer had time to write. “That probably means he doesn’t have time to think, and barely has time for actual reporting,” Laufer said.

Cut down on empty-calorie news

There is no point bringing our audience moment-by-moment updates about firefighters and ambulances arriving on the scene, according to Laufer. “Reporting in such incremental fashion only leads to a waste of emotion and creates a sense of constant anxiety in the audience.”

It is not news, but superficial, redundant “mindless chatter” that is usually completely unnecessary to our existence, but used to fill up time and space, to grab eyes and keep them there, whether it is on TV, online or other platforms.

How to offer a balanced and nutritious news diet?

If all journalists are at the fire, Laufer suggests, you could make an effort to go somewhere else and find an enterprise story that is of consequence.

“Obviously, that is not an easy thing to do when you work within the ‘what-just-happened model,’ but that model breaks down when it doesn’t matter to you,” he said.

What journalists need is for their management to pull them away from such “eye-candy stories” and allow them to exert some of the creativity that has been anaesthetised because they’ve just been jumping for the latest sirens, Laufer said.

Taking a step back from the current rushed reporting approach allows journalists to produce stories that are more consequential and of value to the consumer, which appeal to the audience’s desire to be entertained while informed.

A week’s news for the price of a cafe latte

In his book Slow News, he invites the audience to slow down their news consumption, applying Michael Pollan’s ‘Food Rules‘ – principles for better eating – to the news. Laufer sees an integral connection between food and news.

The “you-get-what-you-pay-for” metaphor is particularly relevant. “Better food costs more because it has been grown or raised less intensively with more care,” Pollan wrote. Equally, it is important on the consumer side that there is a recognition that we need to pay for news. “It’s frowned upon to eat in a restaurant and not pay the bill,” Laufer writes. So why does the audience not see news as another commodity, just like food, water, or gas?

Readers are an active ingredient

The audience is increasingly pushing back against vacuous, erroneous material that gets posted too quickly, which is a good thing, according to Laufer, who encourages consumers to pro-actively opt-out of such pseudo-newscasts.

He wants readers to be participatory, educated, and taking responsibility to seek – and pay for – quality news. There has to be a core of journalists and news organisations dedicated to doing the work. And the Slow News Movement aims to represent just that – promoting journalism of substance that aims for fairness, accuracy and clarity.

“It has to be conceptual, and we have to recognise as a society and as professionals working in that society that we have a job to do: which is to educate ourselves and our employers and the greater society, that this is going in the wrong direction,” Laufer said.

This story was first published by the World Editors Forum and is republished here with permission from the World Association of Newspapers and News Publishers, WAN-IFRA.