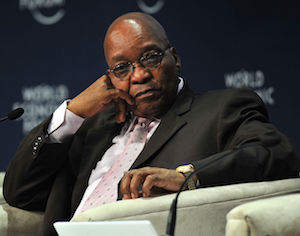 OPINION: When politicians reach a state of dire desperation, they inevitably target the media. Which is stupid because history shows political leaders who rail against the media almost always come off second best.

And even when their desperation increases to the point of muzzling the media, that pretty much just delays the inevitability of their demise. Usually, and most unfortunately, in blood.

For some time now, US presidential hopeful, Donald Trump, has blamed the media for instigating just about everything negative about him.

With only six of America’s thousands of newspapers supporting him, in the event that the brainless adoration of his followers actually results in him becoming the leader of the free world, he will have a massive challenge on his hands to try and convince the mass media that his words and actions can be even vaguely trusted.

Back in South Africa, the pro-Zuma faction as well as the man himself has long blamed the media for everything from causing the country to teeter on the brink of junk status to the shocking performance of the Springboks.

Just as is happening in the United States, with prominent Republicans openly vowing to vote Democrat in a few weeks time, so an increasing number of ANC stalwarts are not in the least bit shy about placing the blame for South Africa’s current predicament squarely on the shoulders of Zuma and his acolytes.

The media is playing a powerful role in all of this not only by refusing to back off from their persistent criticism of the Zuma faction, but also by forcing the usually shy corporate sector to stand up and be counted. All those CEOs who signed their names to last week’s petition would certainly not have done so had the mass media not maintained the pressure.

Only a year ago, probably 99% of all major corporations were quietly pro-Zuma, mainly because of their reliance on government contracts. The mass media has played a significant role in demonstrating to the corporate sector, persuading them that it was ok come out of their self-serving woodwork.

The media is playing a powerful role in all of this not only by refusing to back off from their persistent criticism of the Zuma faction, but also by forcing the usually shy corporate sector to stand up and be counted.

During the apartheid years the mass media played a leading role in exposing the government for what it was, despite the bannings, restrictions and punitive media laws.

But now, South Africa finds itself in pretty much the same situation with a governing party still dominated by those who care nothing for the poor but everything for their own pockets.

People who rely on party loyalty for jobs do not care about Ubuntu, education or poverty. They care only about themselves. They don’t seem to give a damn about the consequences of a ratings downgrade to junk status. They only care for power and protected employment.

Unlike Trump, who continues to persuade himself that women and Mexicans all adore him and that he can win the election, Zuma appears to be in a state of denial about just about every critical issue facing the country.

In all of this is our mass media. Which, I suppose, can be forgiven for a generally poor state of journalism because what they lack in grammatical acumen and the niceties of reportage, they make up for in bucket loads of determination to keep up the pressure against what has become a toxic and oppressive regime.