LATEST NEWS
Home News Media Mecca Print innovation has power, but how to harness it…

Print innovation has power, but how to harness it… 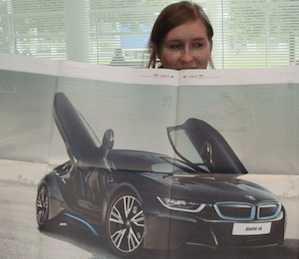 The current widespread interest in digital publishing does not mean the possibilities of print have been exhausted – far from it, according to the three speakers at the Print World session on the Power of Print Innovation at the recent World Publishing Expo held in Vienna.

When newspapers set out to save money in print production, reduce their environmental footprint, and work toward sustainability, they often overlook a potentially worthwhile area: graphic design.

Pedro Matos, a doctoral student in design at the University of Lisbon, described a project he undertook with the Portuguese newspaper Expresso that culminated in two prototype publications. The second prototype resulted in a 20-percent reduction in paper consumption from the paper’s current usage. Not only that, but space available for advertisements increased slightly.

Expresso, a leading general-interest weekly, currently uses the Berliner format. The prototypes used a half-Berliner format. In addition to the page format, another key role in saving space was played by design elements including typeface and layout. Reducing the amount of white space helped, as did smaller headlines and images.

Matos’s work also included an analysis of micro-format newspapers, which are found mainly in Europe, especially Austria and Switzerland. Another aspect of his work examined format reductions by Expresso (broadsheet to Berliner, 2006), The Guardian Weekly (tabloid to half-Berliner, 2007), and Belgium’s La Libre (Berliner to small tabloid, 2009).

He concluded that the savings from format reductions and design changes can be substantial. Also, new and effective advertising presentations become possible, but Matos said advertisers tend to be sceptical about newspapers that reduce their sizes. 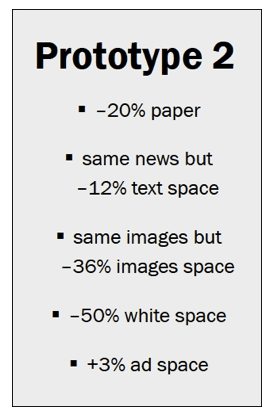 Innovations at The Times of India

When innovating in print, probably the most important prerequisite for success is complete support from top management, said Sanat Hazra, technical and production director, The Times of India. But the employees who actually carry out the innovative projects must be inspired as well, he said. Even more important than inspiration is trust and respect.

The guiding principle is “doing more and better with less”, Hazra, formerly executive director of production at the New York Times, said. To that end, at The Times of India, large brainstorming sessions are held two to three times a year, with ideas flowing freely among many company employees. All departments are invited, to make sure that no knock-on effect of a particular idea is overlooked.

As for the “…with less” part of the principle, Hazra admonished managers to use the proverbial surgical scalpel to make cutbacks, rather than the axe. The latter tool renders it impossible to accurately trace the effects of cuts, which is important to do.

Another crucial activity is monitoring competitors. Only by knowing what the competition is doing can a publishing company keep its position in the marketplace. “Stay close to your customer,” he said. An idea might sound wonderful, but if the customer does not know how to use it, it’s no good. Also, if a particular desirable innovation at first appears to be far too expensive to implement, it is important not to simply reject it but to figure out a way to “reverse engineer” it and put it into effect at far lower cost. That’s “lean innovation,” said Hazra, “a low-cost entry point creating high value.”

He urged publishers to do everything they can with coldset; heatset requires excessive investments that are not cost effective. HQCP is a key innovation at The Times of India, “heatset quality on a coldset press.” He showed several examples of innovative advertising that the paper has published.

The Times of India is printed at 31 print plants around India operated by other publishing companies, a measure that is used when proprietary plants cannot be cost-justified.

While companies should not neglect to calculate the effects of an innovative project, there is such a thing as thinking too much and being overly hesitant to act.

The paper has a distribution project under way called Project Sunrise whose goal is to deliver papers to customers before the sun rises. The aim is, “In the morning when they wake up they don’t reach for their mobile phone – their paper is at the door. This is a very important project for us.” 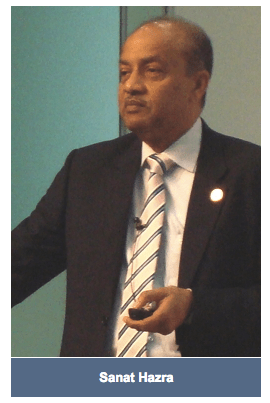 Appealing to all five senses at Al-Jazirah

In Saudi Arabia – like everywhere else in the world – connecting with people means using every possible sensory input, said Abeer Abdalla, PR and business development, Al-Jazirah Corporation for Press, Printing, and Publishing, based in Riyadh.

Presenting J-i6, Al-Jazirah’s Printing Innovation Suite, Abdalla said, “Why tell the same story, the same way? Isn’t it better to innovate?” She continued, “It’s not new in the sense that the technology has never been seen or done before. But collectively, in a daily print publication, a newspaper in Saudi Arabia, this has never been done.”

Abdalla said, “Newspaper ads don’t block, they don’t intrude, they don’t interrupt. There’s that engagement where you can’t delete that interaction. When an advertiser has the option to tell a complete story in a print publication, you force the engagement into a very directed place. You force them to understand the story that you want to see, to sell the product that you want to sell.”

Phase one of the Printing Innovation Suite consists of the following special features: 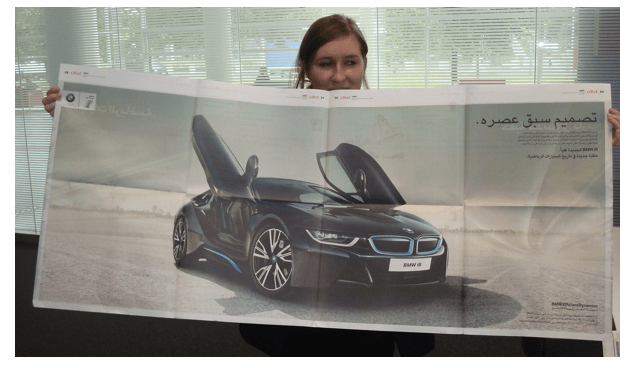