A world in your ears: Radio’s dramatic rebirth in the digital age 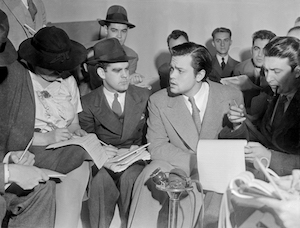 We’ve all heard the old story about how on Halloween night in 1938, Orson Welles’s radio adaptation of The War of the Worlds caused such panic across America that police raided the broadcast office demanding the fictionalised Martian invasion be interrupted. Whether apocryphal – as now thought – or not, the story demonstrated how, from the 1920s to the 1950s, radio drama was a powerful and popular medium.

But with the advent of TV, audio serials gradually disappeared from broadcast schedules in the US and Australia – and in 2010, when even the UK’s BBC Radio 4 was cutting back on its Friday Play, commentators wondered aloud whether video had finally killed the radio star.

But no – in fact, we are in the midst of a remarkable revival in great quality audio drama that is attracting millions of new listeners. Spurred on by new technology, business models and techniques for engaging an audience, there has been an explosion of audio drama production start-ups – with more than 200 independents currently active.

The fact is, audio drama never really died. Public service broadcasters – such as Ireland’s RTE and France’s ArteRadio – have kept the flag flying for new drama, while the UK’s BBC Radio 3, 4 and 4 Extra remain a significant cultural force with more than 10m listeners to their collective output. Equally, independent producers in the US had doggedly pushed out content through the distribution of tapes and CDs. But this is a costly process – and too frequently commercial broadcasters have calculated that the higher costs of drama don’t match well with the short slots required for advertising revenue.

Podcasting changes this in three important respects: there are little broadcasting or distribution overheads to be paid, no commissioning gate-keeper to be persuaded and, crucially, no limit to the potential audience. If an idea captures an audience’s imagination it can gain scale rapidly and go international. It’s this aspect that has seized the popular imagination, as fictional drama such as Welcome to Night Vale (2012) and the non-fiction crime podcast Serial (2014) have picked up millions of new listeners – and, in the case of Serial, made headlines.

Lawyers for Adnan Syed, subject of @serial, asked a Maryland court to free him on bail //t.co/qjwNE7lTzN

Indeed, increasingly the name “radio drama” has become a misnomer. Public service radio broadcasters increasingly combine digital radio transmission with live internet streaming and platforms for accessing live content – such as the BBC’s excellent iPlayer Radio. New independent producers often work exclusively over the internet, combining transmissions with social media to bring the audience with them in building the story.

One of the reasons for the break out success of Welcome to Night Vale – a supernatural drama run on a shoestring budget – was its huge following on social media platforms, such as Tumblr, where the show’s mysteries were picked apart and deciphered.

We've started a series of reading lists based on popular podcasts. This week: @NightValeRadio //t.co/Qd1Xb9ScIj

Unshackled from a reliance on broadcasts, independent producers have really excelled in devising new ways to get closer to their audiences. Quirky science-fiction drama such as The Bright Sessions and Wolf 359 engage their listeners across a dizzying range of channels, giving special talks and content to financial contributors. They also benefit from a regular flow of appreciative fan-art. Comedies such as Wooden Overcoats and The Thrilling Adventure Hour do live performances. You Are Here follows the adventure book model, allowing listeners to decide the plot.

Major producers such as BBC Radio have often struggled to catch up with the burgeoning independent scene – their output is just so broad and varied. As a consequence, BBC Radio has sought to emulate some of the tactics of independents, making separate iTunes and social media feeds for big names such as The Archers (now running in its 65th year) and special productions, such as the recent Tracks. Indeed, in order to build anticipation for the forthcoming adaptation of Neil Gaiman’s Stardust, listeners have been invited to submit their own illustrations.

Yet in this new landscape, big public broadcasts retain the major advantage of a reliable revenue stream. By contrast, one of the downsides of the free-to-air model is that popularity is no guarantee of sustainable funding.

Consequently, there has been a flurry of innovation to generate funding. Many UK audio dramas, such as The Light of September, Mars Corp and Wooden Overcoats, have relied on Kickstarter campaigns to pay for productions upfront, others, such as Greater Boston and ars Paradoxica, build popularity first then income through the Patreon donation service. Advertising revenue is another option – but this requires a certain threshold of audience size and can detract from the intimacy of the content unless the drama presents itself as part of the real world, as does The Black Tapes.

A commission from a broadcaster is of course the lowest risk option, but though the BBC has a mandate to bring new writers to public attention, the high level of submissions makes commissioning a drawn-out process. Yet as the infrastructure around the internet matures, networks have emerged to link producers with advertisers and promoters. Amazon’s Audible has also entered the market with the aim of commissioning eye-catching drama to supplement its audiobook catalogue.

Perhaps the most successful model among independent producers, however, must be Big Finish, the longstanding UK-based audio drama company that has obtained licences from big TV franchises such as Doctor Who to produce straightforward pay-per-download content. By taking advantage of the brand recognition, they are able introduce loyal fans to their extensive catalogue of content in other ranges and genres.

Thanks to competition between the public and independent sector, and the development of new funding models, there is a rich harvest of high quality drama for anyone who cares to find it. In the immediate future, the prospects for audio drama look strong as technological changes make this long-forgotten medium suddenly desirable among multitasking millennials. In a connected world, individuals can take a story from their phone, to their house, to their car without ever needing to break the flow of the story or take their eyes off the road.