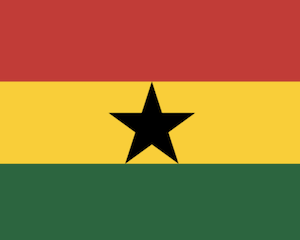 A colonial, Sir Charles MacCarthy, might have set up the first newspaper in Ghana (then known as the Gold Coast) in 1822, but it was a Ghanaian, Kwame Nkrumah, who launched Africa’s first news agency in 1957 to offer a more balanced view of the continent.

The West African country’s media was deregulated and its freedom enshrined in its 1992 Constitution. This had a knock-on effect on the media sector with opportunities for launching new newspapers, radio stations and television networks. A rapidly expanding and highly competitive advertising industry soon followed.

Today the country has 135 newspapers that include both state-owned and independent titles, which leads to a diverse range of voices. Print penetration has been reported as 87%. The Daily Graphic (circulation 100 000) and the Ghanaian Times (circulation 80 000) are state-owned and tend to tow a more conservative line. The Chronicle (circulation 45 000) is the most widely distributed private newspaper. The Daily Guide, published six times a week, has a circulation of around 22 000 papers daily. Freedom House, which studies media freedom in various countries, regards Ghana’s press as being ‘free’.

The Commonwealth Network estimated Ghana’s advertising to grow at 25% per year, taking the advertising industry to a value of $50m by 2014. Banks, mobile phone companies and fast-moving consumer goods comprise the bulk of advertising, with mobile accounting for nearly one-third of all advertising in the country.

The oil boom stirred international marketing firms to set up in the country and has found local agencies partnering with global firms, such as a 2011 deal between Scangroup and Ogilvy, associates of the global advertising and marketing services company WPP.

Award-winning journalist, TV talk show host and media entrepreneur, David Ampofo, managing director of Channel Two Communications, recently told the Oxford Business Group that media consumption habits in Ghana were continuing to change. “Much of the urban middle and upper classes are now connected to DStv and satellite television. This is the result of rising incomes. Digital and internet-based media reflect the changing mindset of the Ghanaian consumer,” he said.

Ampofo says that new media was starting to feature in Ghana, but that traditional media – particularly radio – still plays a huge role. Radio penetration is 91%. “Everybody listens to the radio whether they’re driving into work with their car radios on, listening in their corner shops or walking in the street with a hand-held radio set. It’s a ubiquitous medium that will always remain relevant in the Ghanaian market,” he said.

FM radio only started in 1988, leading to foreign stations such as Voice of America, BBC and Radio France Internationale entering the broadcast arena. But it was only in 1995, after a major demonstration by the public, that government finally issued FM frequencies for privately held stations.

The state-owned and run Ghana Broadcasting Corporation (GBC) was launched in 1935, as the then Gold Coast Broadcasting System (renamed in 1957 with the country’s independence from Britain). Television launched in 1965 and TV penetration today is at 92%. Apart from the GBC, there are several private networks such as TV3, Metro TV, Viasat 1, TV Skyy and TV Africa as well as global operators such as the BBC and CNN. The PAMRO Country Report of 2015 reports that the relatively new United Television Ghana has the most reach, followed by TV3, GTV, Viasat 1, Metro, Crystal Xtra, GH One, TV Africa Net 2, and E TV.

Measurability of television audiences was difficult until recently. Ampofo adds, “For years the network couldn’t tell me who was watching. But as soon as I put the programme on my website, the internet service provider was automatically able to count and locate people following the show. So, the introduction of new media into the market is allowing for some sort of measurability.

“For traditional advertising campaigns that use print, radio or television, however, it is still quite difficult to correctly understand the extent to which they are effective,” said Ampofo.