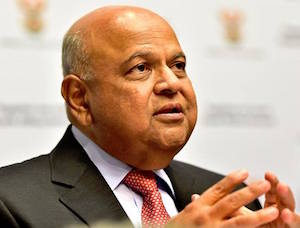 The Sunday Times Top 100 Companies tracks the best-performing businesses on the JSE, acknowledging those with the highest shareholder returns over the past five years.

Gordhan said that the recognition by SA’s business leaders “exemplifies the fact that our wider message has now resonated with the business community. A message that says we are all in this together, that it’s up to us to change South Africa for the better – not just business people, but for all constituencies. It’s a recognition that we need an inclusive form of transformation, where all South Africans feel that they are part, not only of a process, but part of the beneficiaries of the process as well.”

Editor of the Sunday Times, Bongani Siqoko, said this year’s Top 100 Companies rankings prove two things, “… that no single sector of the JSE has outperformed another over the last five years, and that greater-than-usual volatility has become the new normal. Investors have had to be on their toes in choosing stocks that will outperform within each industry, but in general performance on the JSE seems to have gone back to primary roots, with companies that service basic demands – like housing, schooling and infrastructure – making their way to the head of the pack.”

“So I’m very grateful for this award, but I don’t see this as a personal thing. I think it’s a huge acknowledgement by the business community that we are in this together and that collectively we have the will to change South Africa into a better place,” Gordhan said.

Dr Johann Rupert, chairman of Swiss-based luxury-goods company Richemont and South Africa-based Remgro accepted the Sunday Times Top 100 Companies Lifetime Achievement Award in recognition of his contribution to the country’s economy. His success has been achieved with leadership that understands the value of creating a culture and tone that resonates with employees and customers, and is set right at the top in the head office, he says.“If you set the right culture for an organisation, then the loyalty that must go both ways can set in.”

Calgro M3 (JSE: CGR) is a property developer specialising in integrated developments aimed at the entry-level consumer.  The company’s performance in the Sunday Times Top 100 Companies over the past five years shows that an initial investment of R10 000 in 2011 has achieved a value of R150 000 in 2016.  The opening value of the share in 2011 was 120 cents, with a closing value of 1800 cents in 2016, and compound annual growth of 71.88%.

The Sunday Times Royal Companies are those which have placed in the top 20 positions of the Sunday Times Top 100 Companies for three consecutive years.  In 2016, the companies that have maintained consistency include Coronation Fund Managers, EOH Holdings Limited, Naspers Limited, Mondi Group, New Europe Property Investments PLC and Afrimat Limited.