Trump’s long history with the media 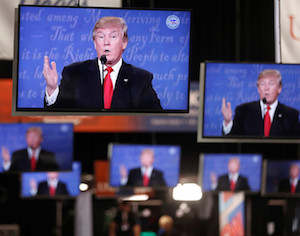 Trump’s decade-long experience with The Apprentice franchise would have alerted him to the influence of television. The programme’s tag phrase, “You’re fired” entered the US lexicon. As a candidate for the Republican presidential nomination, he turned to TV as a promotional vehicle…

The lack of genetic variability in the Irish potato crop, especially in the dominant variety, the Irish Lumper, brought on a human disaster. In the 1840s, a great blight struck the crop that had become a staple of the Irish diet. That famine changed the history of Ireland and much of the English-speaking world.

Something similar is happening in both the traditional media and social media.
Variability and diversity is disappearing: our media is becoming monocultural, an echo chamber for prejudices and bigoted thinking.

But the polarisation of the media in the United States, already poisoning US politics, is likely to worsen if Republican nominee (now president elect) Donald Trump gets the numbers.

Trump’s interest in the media has a long history. It predates his appearances from 2004, as host of The Apprentice (later Celebrity Apprentice) created for NBC by the British television producer Mark Burnett.

In 1985, Trump was enough of a media personality to appear, untitled, as “himself” in an episode of The Jeffersons titled You’ll Never Get Rich There were many more walk-ons for “The Donald” to follow, including two episodes of Sex and the City.

Trump’s decade-long experience with the Apprentice franchise would have alerted him to the influence of television. The programme’s tag phrase, “You’re fired” entered the US lexicon. As a candidate for the Republican presidential nomination, he turned to TV as a promotional vehicle with interviews such as this one with Sarah Palin on the conservative cable channel, One America News Network.

And it has been the mainstream media’s entrancement with Trump-the-performer that has filled many hours of news and current affairs programmes, to the detriment of coverage of the shortcomings of the Democratic nominee, Hillary Clinton. It’s a deficiency brought on by Trump himself, though he cleverly sheets home the blame to the media.

In these circumstances, it is little wonder that Trump’s thoughts would turn to controlling his own media. He’s taken the first steps with his Facebook page and Trump Tube TV where you can watch every speech.

But there have been rumours of larger plans, kicked off by a story in Vanity Fair in June. These rumours enjoyed renewed life in a Reuters wire story of 17 October, citing the Financial Times in London. Trump already owns a TV production company, Trump Productions, and Trump’s son-in-law, Jared Kushner, owns the weekly New York Observer and could helm an expanded Trump media presence.

Others in the Trump tent with similar interests include Roger Ailes, founder and head of Fox News until forced to resign over sexual harassment allegations and Stephen K. Bannon, whose radical-right website Breitbart has run a campaign of vilification against refugees from the Middle East who have made successful lives in the US.

Plans for Trump TV have been denied by the Trump camp. But the temptation to take the support of more than 30% of the US adult population and leverage it into an audience for a radical-right cable TV channel must be great.

Then again, history is not encouraging. Palin’s attempt to do just that after the 2012 US election lasted a year.

Highly polarised media, be it of the left or the right, is a threat to democracy.

Just as nature depends on genetic diversity for species survival, democracy is dependent on diversity in public debate. When people are exposed only to one line of thinking, they become crippled by the narrowness of their understanding of the world and blind to alternative ways to approach its many challenges.

For a century now, we have relied on a diversity of public media and free expression to foster a diversity of ideas. Past mergers and takeovers, and those that may follow pending “reforms” of media laws, have narrowed media diversity.

The growth of social media, its lack of self-censorship and responsible commentary, has changed the mediascape. But social media is not contributing to diversity. It is attracting silo audiences. It is communicating to the converted, not winning converts. And it is not good at debate: demagogues are better for business.

There are no simple solutions. But one thing is for sure: diverse media in the marketplace of ideas is our best proof against demagoguery.

And we must be prepared to pay for such media. It is necessary for survival of democracy.