Visualising the web of state capture 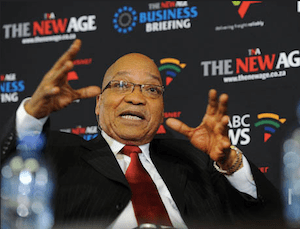 [DISCLAIMER: This post is based on data automatically generated by text mining algorithms and, while we have read through and cleaned up the results to a degree, the final outputs are not 100% clean. When reading this post, please keep a few caveats in mind, including that 1) some relationships might have been missed by the algorithms, 2) some nodes incorrectly refer to words that are not actual entities (e.g. ‘Parliament’), and 3) a relationship between two nodes does not necessarily imply some kind of wrong-doing (it just means that those names were mentioned in the report within five words of each other for whatever reason). The best way to draw final conclusions is to read the actual report.]

The State of Capture Report is all over the news since its release last week after last ditch attempts by members of our own government (including President Jacob Zuma and ministers Des van Rooyen and Mosebenzi Zwane) to prevent it from seeing the light of day. However, justice ran its course in the end and the report unexpectedly landed in South Africans’ inboxes and newsfeeds on the afternoon of Tuesday 1 November 2016.

Thembani Phaweni (a Masters statistician at UCT/AIMS) and I have collaborated regularly on text mining tasks in the past so we decided to take a look at the report from different angle to see if we could unearth any stories that had not already been emphasised in the media. To do this, we treated the report as a data analysis and visualisation exercise. We were particularly interested in uncovering the relationships between the various players in the report to see if there were any that had not come to light before

Most of the news stories that have been derived from the report detail suspicious dealings around mining resources and government contracts. Some of the key players included President Zuma, his son, Duduzane Zuma, the Gupta brothers and their various mining operations, and state-owned energy supplier, Eskom, along with its CEO, Tom Molefe. We’ve found that this is far from the end of the story though. Our network analysis of the report shows that the story is much bigger than that. It is one of wholesale capture of many of South Africa’s parastatals (or former parastatals), including Eskom, Transnet, SAA and Denel. In addition, the data shows that President Zuma is really just one of many other ministers and businesspeople caught up in the Gupta web; a web whose tendrils reach deep into numerous parts of our government and economy. The scale of the Gupta state capture apparatus is truly breathtaking and must have taken incredible perseverance and strategic wit to build. In other circumstances, we’d be thoroughly impressed.

To uncover the relationships between people and organisations (referred to as “entities”), we first used text mining tools to extract a list of the various entities in the report (no automated tool extracts every entity with 100% accuracy but we did manage to capture most). We then drew a line between entities that appeared within five words of each other in the text. The result was a network of people, places and organisations mentioned in the report. After a bit of cursory cleaning to merge mis-spelt names and duplicate entities, it looked like this: 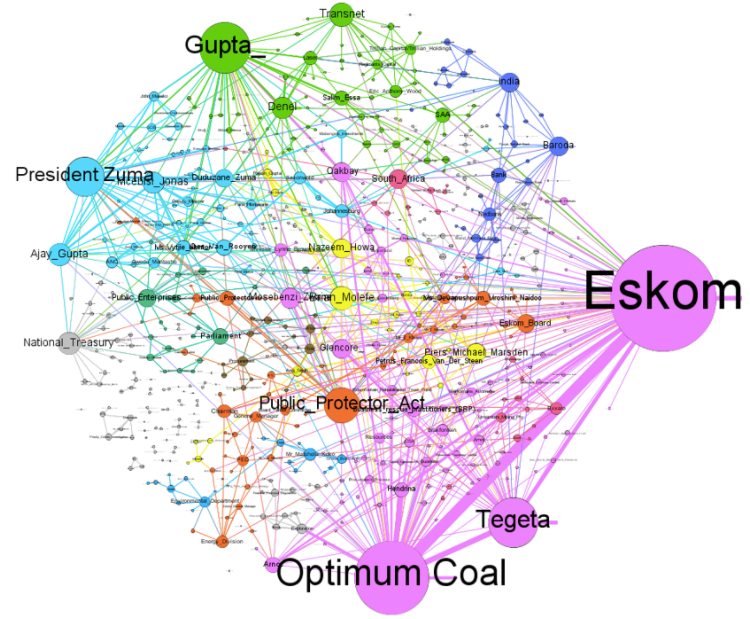 There’s a lot going on in the above network but a few key coloured regions stand out. These are regions of highly interconnected entities that our algorithms recognise as distinct ‘communities’. Eskom and Gupta-owned resource companies, Optimum and Tegeta, clearly dominate the report (and thus the network). The below chart summarises that community along with the other main communities identified in the data. We’ll comment on some of them shortly but for now, these are the main ‘areas’ covered in the State of Capture Report: 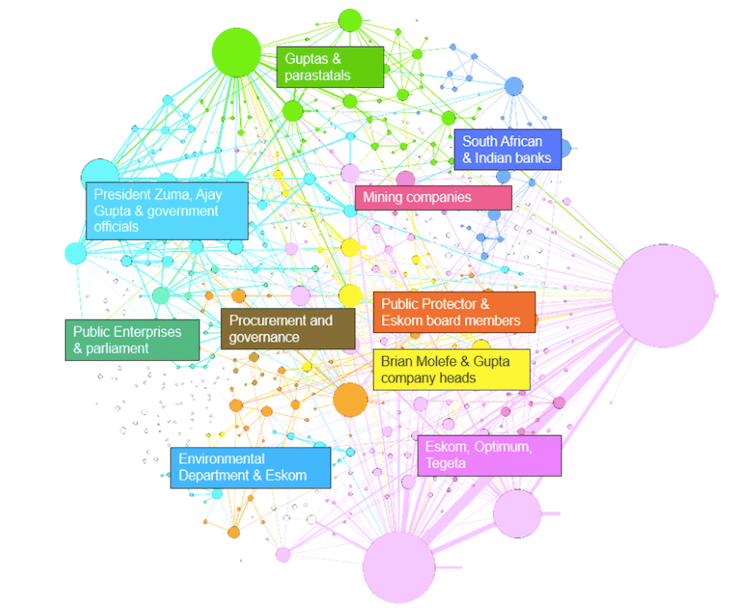 There are 598 entities in the above network which gives you an idea of how many people and organisations are involved. This number is surely inflated due to our algorithms erroneously extracting some words that aren’t actually entities. However, the report still mentions hundreds of politicians, business people, lawyers and organisations of various types. The below chart gives us an idea of what proportion of entities each community contained (an entity can only be in assigned to one community in this analysis). As we can see, 16.7% of the entities identified relate to the Eskom-Optimum-Tegeta community, 10.5% relate to the Guptas and South African parastatals, and so on…

The State of Capture Report really is dominated by the deals made between state-owned power provider, Eskom, and Gupta-owned coal & resource companies, Optimum and Tegeta. We also see that Minister of Mineral Resources, Mosebenzi Zwane, who has come under fire (for example, by ANC Secretary-General, Gwede Mantashe) for flying to Switzerland to broker a deal between Glencore, Optimum and Tegeta, appears prominently in this community. Other prominent names that appear (although this does not necessarily imply that they have been accused of any wrongdoing – one needs to read the actual report in more detail for that) include the Gupta-owned Oakbay Investments, Swiss mining company, Glencore, and Minister of Public Enterprises, Lynne Brown. 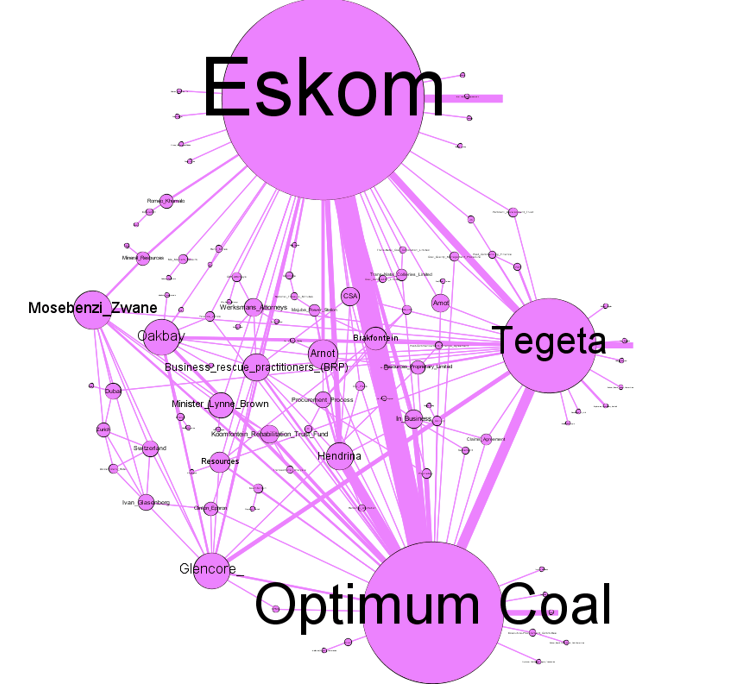 It’s interesting to see that the Gupta entity falls into a community that also includes parastatals, Dennel, SAA and Transnet, which raises questions about just how embedded they are within these institutions. Other prominent names that come up (again, for good or bad reasons) include the Gupta-owned, VR Laser (awarded a large Denel contract), and two names associated with Gupta-owned Trillian Capital/Trillian Holdings (whose dealings with Transnet have raised alarm bells): Salim Essa, director of Gupta-owned Trillian Capital and Eric Anthony Wood, who formerly headed up Regiments Capital but moved to Trillian when Transnet similarly moved their business. 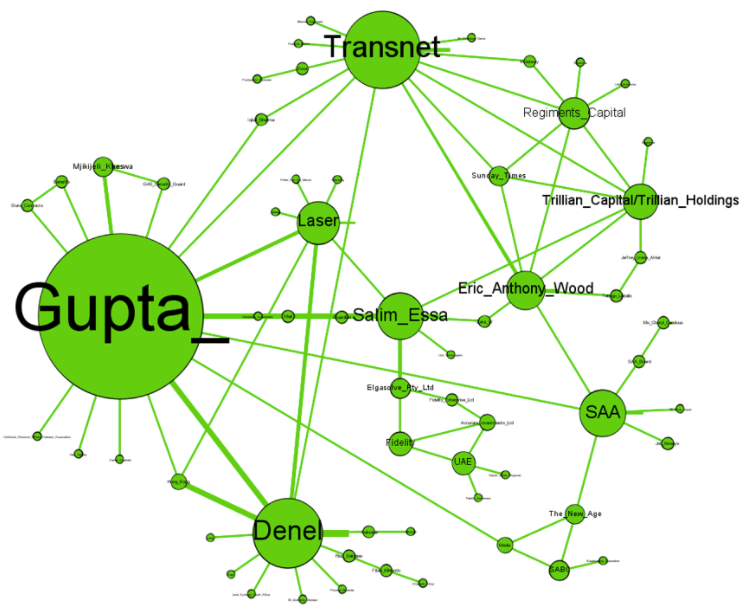 The third largest community is a bit of a mash-up between the various members of the Eskom board who have personal ties to the Guptas (see amaBhungane’s breakdown of the board members hereunder the title “Essa’s current Eskom five“) and the Public Protector’s office. These two groups are actually only tied together by a single relationship below so I wouldn’t read too much into the overlap (except to the extent that the Public Protector is investigating these individuals). 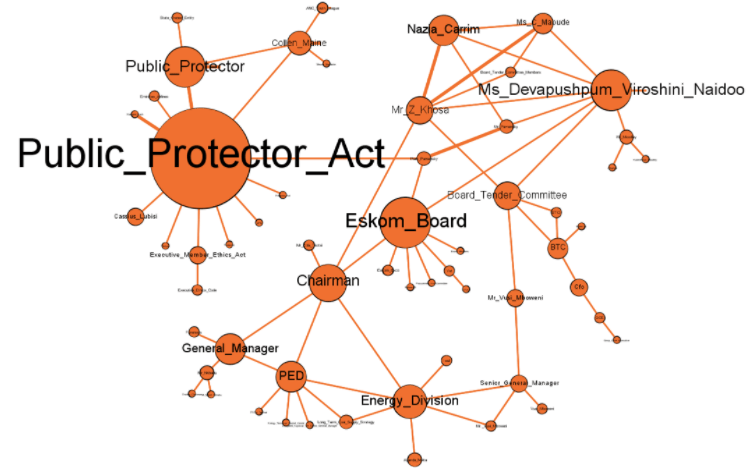 President Zuma only appears in the fourth largest group which highlights just how large the overall Gupta state capture network is. President Zuma is really just another player in their web (albeit a particularly important one). We see the President situated within the network primarily in the company of Ajay Gupta and various government officials that have played a prominent role in the many “state capture” scandals that have rocked our country over the past year or so, including Vytjie Mentor, Mcebisi Jonas, Des van Rooyen, Nhlanhla Nene and Pravin Gordhan. President Zuma’s son, Duduzane Zuma, also features prominently in this community. He is connected to Mabengela Investments where he was a co-director (as he was for 11 other Gupta companies). Mabengela Investments part-owns Trillian, which sits at the centre of the Eskom scandal. What a tangled web we weave. 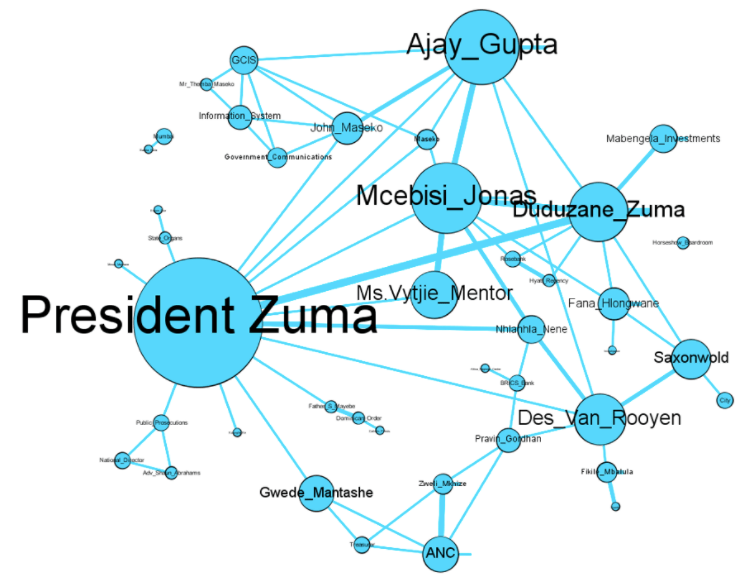 The last community that we’re going to comment on in this post includes Eskom CEO, Brian Molefe (who recently broke down at a press conference and who explained away cellphone records placing him at the Gupta’s Saxonwold complex numerous times by saying he was instead a regular visitor at a nearby shebeen, spawning the #SaxonwoldShebeen meme), the Gupta brothers, Rajesh and Atul, and various heads of Gupta-owned companies. Anoj Singh, who has played a senior financial role at both Transnet and Eskom and who has been accused of brokering various kickback agreements with Gupta-related businesses in the past also makes an appearance.

Former head of Gupta-owned Oakbay Investments, Nazeem Howa appears prominently in this community. Oakbay was at the eye of the most recent Gupta state capture storm, which might be why Howa resigned from that company. Piers Marsden and Petrus van der Steen are “business rescue practitioners” who were recruited by Optimum Coal and whose report detailed how controversially Eskom helped fund the Gupta-owned mining enterprise after banks refused to.

There are many other communities of interest in the report data, but we’re going to stop our analysis there for now. What really amazes us about this data is that there are few real surprises within it. What does stand out though is the scale of the capture. Many South African parastatals are involved through the corrupt (or at the very least, incompetent) actions of numerous politicians and businesspeople. Zuma, while a prominent player, is just one of many. He just happens to hold the single most important position in our country and should be ethically removed from any such involvement, which is what makes the report’s observations to the contrary so potentially damning.

While we bring little new information to the table with this analysis, we hope that by visualising it, we help readers put the pieces together more easily in their minds. A picture is worth a thousand words and all that after all.

Indeed, our analysis really just corroborates the great journalism that has already been produced on the subject of state capture by organisations such as the Mail & Guardian, amaBhungane, City Press and others. They have covered everything touched on in this post in much more detail than we could ever hope to and they have been doing it for months, if not years, already. It’s amazing how, despite clear evidence and compelling reporting on the subject, it has still taken this long for a general groundswell to build up in reaction to the actors involved in state capture (and the wave still hasn’t crested).

The delay has been helped in no small part by the active propaganda and noise injected into the public sphere by Gupta-owned media entitities such as The New Age and ANN7. They push a narrative that seeks to counteract the charges against their owners and their collaborators (see for example how the Gupta media houses appear to work with the Black First Land First party to promote a narrative designed to undermine the Public Protector here).

Despite all their attempts to distract and redirect the South African public though, the truth has come out in the end. While this is not the end of the fight, hopefully we are another big step closer to a truly accountable government that works for the people.

Kyle Findlay heads up a data science team for a large, international market research firm. This post originally appeared on his personal blog, Superlinear, and is republished here with the permission of the author. Thembani Phaweni is a Masters statistician at UCT/AIMS.