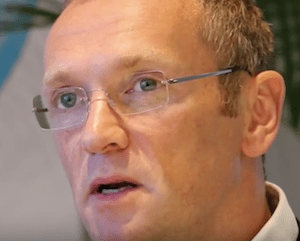 RYK VAN NIEKERK: South Africa media giant, Naspers, published interim results on Friday. Revenue declined slightly to R41 billion but core headline earnings grew by 31% to R12.7 billion. On the line is Naspers CEO, Bob van Dijk. Bob, welcome to the show, the market seems to think the results are slightly disappointing but you are operating in a very difficult and competitive market currently.

BOB VAN DIJK: Yes, I think in general the market, we were a little bit ahead of expectations and I think the results were generally well received actually. The main impact on our consolidated numbers, that you would have seen, in a very tough currency environment in the African market, which has depressed our earnings is our TV business

RYK VAN NIEKERK: We’re going to get to the TV business now but the results are, of course, dominated by Tencent, are you happy with the performance of Tencent in recent times?

BOB VAN DIJK: I think Tencent has done a tremendous job and I think their ability to execute at scale and to continue to get into new and very high growth businesses is very impressive. Our e-commerce businesses are also showing accelerated growth across the board and I think the combination of the two is very encouraging.

RYK VAN NIEKERK: Tencent, of course, dominates the market capitalization of Naspers, do you foresee an unbundling in the near future?

RYK VAN NIEKERK: Why would you not do that? It seems like there are a lot of assets within Naspers that are not getting the valuations they should be.

BOB VAN DIJK: If you look at what we do as a company, we are a global internet company primarily, and exposure to China, which is the largest internet market in the world, actually makes a tremendous amount of sense for us. We also believe that because of the quality of the Tencent team I think that business has considerable further upside potential.

BOB VAN DIJK: In terms of subscriber growth, if you have a close look at the numbers, we had an excellent half, we added more than 600 000 subscribers across the continent and we’re actually really pleased with that. The reality is that we have quite a lot of our revenue in local currency, almost all of our revenue is in local currency, either in rands or naira or kwanza, and we have a good chunk of our cost in dollars and when the dollar strengthens, as it has done quite dramatically if you look at the year-on-year developments, it hurts our profitability. I think operationally we are very happy, I think from a currency point of view and the impact that has, it’s been tough.

RYK VAN NIEKERK: Do you have any way to hedge the currency risk?

BOB VAN DIJK: Yes, we do, so we can hedge out our rand exposure. However, in markets like Nigeria or Angola there is actually not enough liquidity to appropriately hedge that. So there we just have to eat whatever pain comes our way. I think we can compensate by addressing our cost base and we do but it’s painful when currencies go against the tide that much.

RYK VAN NIEKERK: ShowMax is a pretty innovative product launched in South Africa as a competitor to Netflix, are you happy with the performance of ShowMax?

BOB VAN DIJK: It’s seen very nice growth in South Africa and I think customers are generally using it quite intensively and the product, from when we first launched in August 2015, has evolved a lot and it’s now an excellent product. I think there’s more to do though, I think for many customers access to cheap data is an issue, so we are working on lighter versions that consume less data and packaging data with the main telco operator. So I think that has the potential to accelerate things further.

RYK VAN NIEKERK: The print business, of course, many years ago it was the core business of Naspers but it has declined significantly in especially revenue and profitability contributions but it is under pressure currently. What is your strategy for your print business?

BOB VAN DIJK: You’re absolutely right, it’s an extremely tough environment, where advertisers are moving revenue away from print quite rapidly and the entire media market is under pressure to begin with. So it’s a tough trading environment. What the team has done that I admire is they have been pretty hard on adjusting the cost base to the new reality. They spent time investing in businesses that I think are very promising. So our online news business is doing well, our Spree business is doing well and I think that way we are building the future of Media24, while having to realise that the traditional print business is under massive pressure.

RYK VAN NIEKERK: Of course the media plays a significant role in South Africa, in our constitutional democracy, you are closing some titles and there is a reduction in the number of journalists in your various publications, are you concerned about the quality of journalism that those titles still produce?

BOB VAN DIJK: I still feel very good about the quality of what we produce. I think the reality is we’ve been mainly closing magazines, so not so much on the newsprint side of the house but I think that over time is also hard to avoid. I think it will be a matter of leaner teams and trying to get the important stories out but I do agree with you that news media plays a big role.

RYK VAN NIEKERK: Naspers continues to invest in research and development, where do you see the next big Tencent to be and how far are you to actually finding that technology?

BOB VAN DIJK: It’s hard to predict the future, there are few crystal balls around to be had but I think what we do is we follow where people spend their time and money, and then look at where technology hasn’t yet transformed the way people do things. There are a number of areas that we are really excited about but still e-commerce is going to be a big growth market all around the world. But also food, we believe, is going to increasingly have a technology-driven transformation. Education is another topic where we believe that technology has played a relatively modest role, compared to what it can do in the years to come. So if I had to call out two, those are the ones that are high on my list.

RYK VAN NIEKERK: Can you explain a bit on the educational focus, what type of educational investments are you looking at?

BOB VAN DIJK: We’ve made three in the last six months and they are actually quite different but what I think they are trying to do is facilitate the way people learn by offering them technology solutions rather than standard classroom offerings. We’ve stayed generally outside the kindergarten to Grade 12 education sector, that’s basically more in discretionary education and teaching people how to write code because we are quite convinced that the world needs millions more people who can write software and I think current educational institutions are not able to deliver on that need. Wherever we see a good model that addresses that we get quite excited.