Research by Safrea has revealed the tough life experienced by media freelancers, with many earning less than R10 000 a month and battling with clients to be paid on time. Glenda Nevill reports.

The South African Freelancer’s Association (Safrea) survey, the first of its kind, was designed to discover the average age, gender, residence, education, working hours and income of freelancers working in the media and communications sphere. One of the key findings was that women predominated (78% of the respondents were female), and most were either Baby Boomers or Generation X-ers.

“Our research doesn’t examine why there is such a gender divide,” says Laura Rawden, chairwoman of Safrea. “However, it’s worth exploring whether it has to do with women juggling work-life balance with freelancing. Also, whether there is a gender pay gap that makes freelancing make more sense for women.” 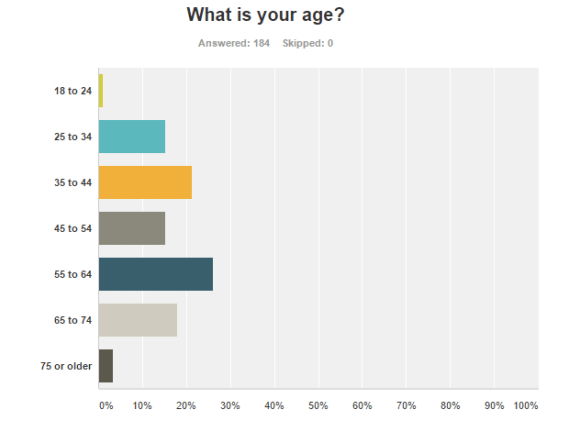 Rawden says the results didn’t reflect an industry that excludes men. “I would rather say there are different reasons that men and women choose freelancing,” she told The Media Online.

The data showed media freelancers are highly skilled with over 60% having postgraduate degrees. Most (39%) have 20 or more years’ experience in their specialty, and almost half (44%) have been freelancers for more than 10 years. They are concentrated in Gauteng (43%) and the Western Cape (35%). 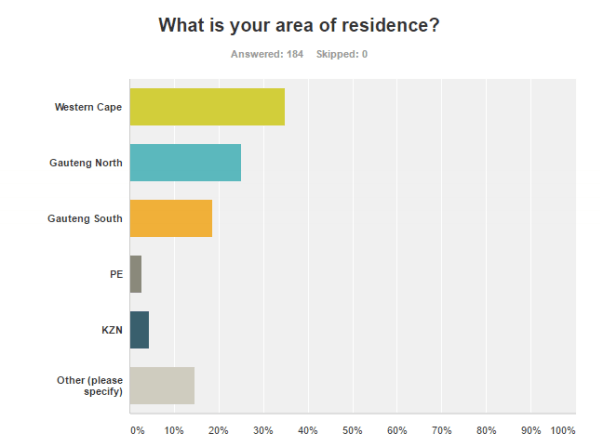 Marcia Klein, who spent 12 years at the Sunday Times and who now freelances out of Cape Town, says it’s not surprising, “but deeply upsetting to see that freelancers are earning on average R10 000 a month”.

“I have worked full time in newsrooms for over 25 years and as a freelance journalist for two, and over those two years I have done some work for just R1 a word and have even done some for nothing in the hope of getting more work in the future,” she says. “I am one of the lucky few earning more than the average but generally, the pay does not adequately reflect the amount of work done or, in my opinion, the value of the end-product.”

Are freelancers being paid adequate rates? 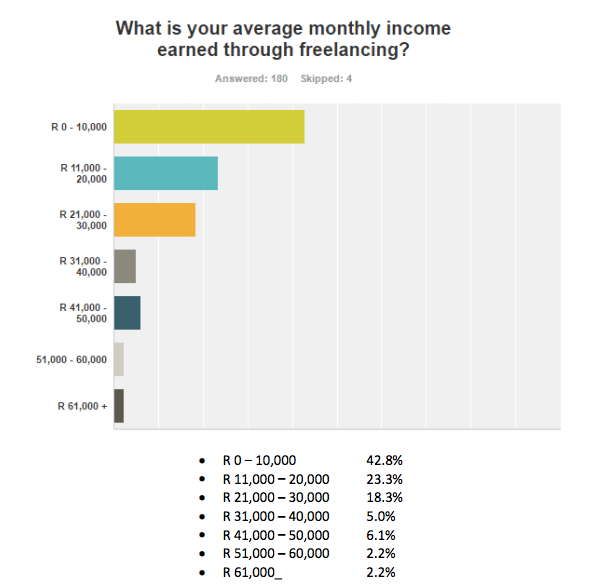 “While the nature of freelancing may tempt workers to accept whatever they can get, doing so hurts all freelancers in the long run. Accepting low rates establishes a precedent that employers may use to justify lowering all freelance rates. Safrea acknowledges there are some situations where accepting a lower fee is reasonable but it urges freelancers to stand firm behind reasonable rates structures and to negotiate fair pay,” it said.

Rawden says “unfortunately” it is often the case that freelancers accept jobs paying less than they’re worth. “But one would question the quality of work an employer gets when paying such a low rate that they’d have to ‘shop around’ to find a freelancer who’d accept. I like to think that you pay for what you get – and that’s not just in the quality of the work submitted. It’s also in the reliability of the freelancer, professionalism and ability to work to spec and on deadline. You can’t expect to get all that when you’re paying pennies,” she says.

Rawden says freelancers should negotiate with the companies to try and get a better deal. “Freelancers are often faced with the question of whether or not to accept low fees because of financial need. But once that bar is set, how can a freelancer ever negotiate for a fair wage? Employers must acknowledge that a freelancer is a highly skilled professional and deserves to be paid as such. And freelancers must work hard to negotiate rates that are fair and equal to their skills and experience to ensure they are paid what they’re worth,” she says.

Klein believes the companies employing freelancers should come to the party and pay professional fees. “Freelancers have no reason to complain. They agree to the terms and therefore write willingly at the negotiated rates even if this is a reflection of their desperation rather than what their services are worth.

“I would like to appeal to companies to pay freelancers what they are worth, rather than what they are willing to work for – and to media houses to reconsider hiring people with experience and expertise,” she says.

“Freelancers profiled in the research are well educated and highly skilled and have decades of experience. Media companies are not hiring them and many media houses have an unwritten policy of not hiring people who have worked for them before. But they would be an asset to publications which currently pay more than R10 000 a month to interns with no experience at all,” she adds.

Rawden says there is “absolutely” a correlation between the drop in advertising income experienced by all too many publications and the rates they pay freelancers. “Media is an industry that thrives with advertising revenue and without it even the biggest media houses can’t pay fees,” she says. “Sadly, what we are seeing as a result of the drop in ad revenue is very poor fees for freelancers along with questionable requirements such as expecting one fee to cover a piece being published in print and online, or expecting a writer to submit photography for free.”

Rawden says writing for the web can sometimes pay less, which is questionable. “Writing is writing, whether it’s for print or online. There isn’t less work involved in putting a piece together just because it’s not being printed. And considering the increasing value and audience of online work, we should be seeing digital fees increase,” she says.

Freelance multimedia journalist and content producer Zanele Mji, who has been freelancing out of choice for six years, says the Safrea insights into average earnings were “simultaneously comforting and alarming. That feeling like you could always do more (more work, more networking etc) comes with the territory of being a freelancer. I’ve always told myself that I just need to work that little bit harder to get my earnings to where I want them to be,” she says.

“The report shows that there is in fact a problem in the industry; I’m not the only one earning below my potential and that the problem is not necessarily with me or my individual situation, it’s something bigger like maybe industry attitudes towards freelancers or corporate models that have not adjusted to accommodate freelancers or a need for tighter regulations and standards to protect us. It could be all or some or none of those, but there is a problem because many Safrea members aren’t earning much as freelancers.”

Mji says the report was not representative or exhaustive as less than half Safrea’s members responded (something Rawden acknowledges, saying, “Our hope is to get more freelancers and media bodies with freelance membership to get on board and help make next year’s report even more comprehensive”).

A glaring gap was race

Mji has further questions: “Safrea did not account for its own demographics. What percentage of freelancers are in Safrea? What does a sample set from Safrea look like compared to the rest of the freelance world? They supplied age, location, gender but a huge glaring gap was race. Why did Safrea not account for race demographics in the survey? I would also have liked to see a class/socioeconomic breakdown; if the majority of us are earning less than R10 000 monthly, how are we making it work? Is freelancing only viable for a certain social set? Why are the majority of respondents older?”

Freelancer Lucinda Jordaan says she read somewhere that, “when Ireland went into recession, the freelancers were first to feel it, and first to draw attention to the country’s economic woes.

“I don’t know that we can say the same here, but there’s no doubt that, everyone’s feeling a financial pinch and the one industry that has taken the biggest whack is the media. Media24’s magazine cull took about a year to be keenly felt among freelancers, as most simply shifted from one position to another and there was ample work to go around. No longer,” she says.

Remote clients the most reliable

“When Independent Media retrenched staff by the bucket loads last year, quite a few old colleagues called me up, worriedly querying the quagmires of freelancing. If you’re wanting a secure income, it’s not recommended. Payment is pithy, unpredictable and, in some cases, not even forthcoming.

“Some of us are lucky to have fairly regular, prompt-paying clients, but the biggest payload seems to come from outside our borders. Africa’s telecommunications and media industry is growing, and remote clients are proving to be the most reliable. US publishers are also casting their nets wide, and it’s become easier to approach even legacy publications. All it takes is determination,” she says.

But, she adds, “I’ve had a few notable cases of non-payment, both from local and international clients. (A local newspaper owes me R8k for published pieces, one longstanding Nigerian client simply stopped paying a much-valued retainer, and one company took months to finally settle,” she says.

“For freelancing to pay off, you simply have to diversify: if you can write, learn to edit (one doesn’t necessarily imply skill with the other); spread your reach and focus: if you’re a travel writer, take on lifestyle pieces. Segue into other genres and industries.

“Mostly, research: see what publications are out there, what their rates are, and don’t be scared to pitch,” she advises. “There’s an inordinate amount of resources available too, and I highly recommend Safrea as it’s an important portal for inspiration and a wealth of tips and tools for freelancers who don’t know how to even start producing work.”

Download the full report here. It includes tables of rates for specific specialities.