LATEST NEWS
Home Digital Stormy narratives on social media: How Dineo reminds us that sexism is a problem

Stormy narratives on social media: How Dineo reminds us that sexism is a problem 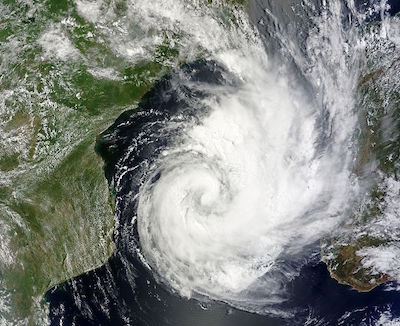 The name ‘Dineo’ was provided by Botswana, as a member of the SouthWest Indian Ocean region for the current (2016/2017) cyclone season.

According to the World Meteorological organisation “tropical cyclones/hurricanes are named neither after any particular person, nor with any preference in alphabetical sequence. The tropical cyclone/hurricane names selected are those that are familiar to the people in each region”.

They add that the naming of storms has been necessary and efficient, particularly for public awareness and warning messages “because names are presumed to be far easier to remember than numbers and technical terms. Many agree that appending names to storms makes it easier for the media to report on tropical cyclones, heightens interest in warnings and increases community preparedness.”

But I had an interest in how South Africans would respond not only to the storm but also the very local and familiar Tswana name that it was given. South Africans responded with less fear or anxiety than one would have expected following all the chatter about the storm, Dineo.  Members of the public created a Facebook group to share information about the storm and its whereabouts. The group “tropical cyclone Dineo” had 1000 members within hours of being created.

Among the Dineo related trends was #ThingsDineoShouldTakeWithHer – victims ranged from Nkandla to Orlando Pirates.

Conversation spiked on Friday to over 26 000 mentions  from only 57 for the previous day.  Much of it was about the storm’s presence in Mozambique. It seems as though South Africans were becoming increasingly concerned. Yet, much of the conversation consisted more of  humour than anxiety. For example, people offered alternative names for Dineo.

The anthropomorphism of the storm – ‘Dineo’ (feminine) –  led to people likening it to local celebrities and controversies surrounding them. At least 5% of all conversation was about Bonang, Kelly Khumalo, Baleka Mbete or “period pains”. The conversation stretched the naming of cyclones into the sphere of gender and sex, as illustrated by some of the sexist statements made about local celebrities and women in general.

Of mentions referring to period pain, the authors were predominantly male.

We can clearly see how the threat of a storm may lead to particular conversations. In this instance, the name attributed to the tropical storm served as impetus for narratives around gender.  There is more to a name than naming customs.  In a country struggling with gender inequality and rape culture, the feminisation of a tropical storm is very problematic. 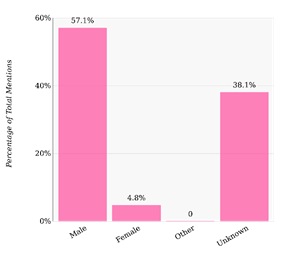