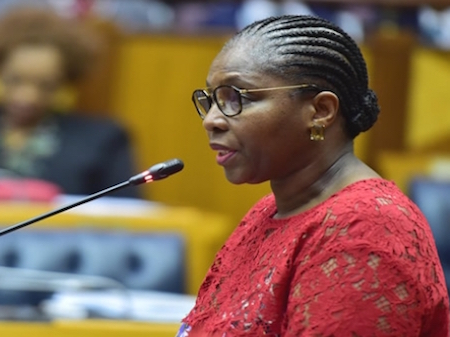 
Communications minister Ayanda Dlodlo has instructed her department to find out why an application in terms of the Promotion of Access to Information Act (PAIA) by the South African History Archive on behalf of researcher Michael Moss was not dealt with. Moss is researching how government spends its advertising budget.

Dlodlo’s instruction followed a complete lack of response by Government Communications and Information System (GCIS) to the request for information, which, in terms of the law, meant it had effectively refused to provide the information.

Moss is a South African currently based in London where he is studying towards a master’s degree. “The research I’m engaged in is concerned with whether, or to what extent, government advertising patterns influence the financial sustainability and independence of print and broadcast media in South Africa (or aims to do so). The information that has been requested from GCIS is naturally central to this, so, in February this year, I approached SAHA who submitted the PAIA request to GCIS on my behalf,” Moss told The Media Online.

There are, of course, perceptions that government uses its advertising budget as a tool for political capture of media institutions, both of community media organisations and at the ANN7/New Age level, said civil society media activist, Murray Hunter of Right2Know.

SAHA’s Toerien van Wyk said the GCIS has “not only not provided any information, but has in fact not even officially acknowledged receipt of our request for information”. He hopes the minister’s intervention – after a “civil society colleague” brought the matter to her attention – will resolve the current impasse.

If not, SAHA would be forced to appeal the minister’s deemed dismissal of the internal appeal through an application to court. “This is generally speaking problematic as the court process is fairly onerous and expensive, hence calls from civil society, including the Access to Information Network and its members, that the Office of the Information Regulator be set up speedily in order to provide for a more cost-effective appeal mechanism,” Van Wyk said.

SAHA would like questions answered around how much government spends on advertising, where it spends this money, and whether it has it done its homework to make sure it’s spending wisely when it does spend on advertising, among others.

“Our mission is to expand the boundaries of access to information in South Africa by using PAIA,” Van Wyk says. “We do not make requests for the sake of making requests but are informed in making requests by (1) current affairs and information that would therefore be in the public interest (2) the needs of individuals and communities as articulated in consultation with us and (3) the needs of researchers and other public interest organisations. With respect to this specific request what is requested and how the request is broken down was informed by the needs and suggestions of Michael Moss, who is doing research in the public interest. The full request and the manner in which it has been broke down can be accessed and viewed on our website.”

In a blog posted by SAHA, headlined ‘Is government supporting your favourite newspaper?’ the organisation explained that like all public procurement, government advertising should be done in accordance with section 217 of the Constitution, and that it was in the public interest.

“Government advertising facilitates communication from the state to citizens and, more critically, government spending on advertising makes up a part of the income that sustains media outlets financially, enabling them to perform their critical democratic function of contributing towards freedom of expression.

“In this way, government advertising is effectively a form of indirect media subsidy which can be used to the financial benefit of some outlets, and the detriment of others. The public should thus know which outlets receive government advertising support, in what quantities and why. This is especially important in the current context where changes to the way in which media is distributed and consumed has disrupted the business model for journalism, leaving many outlets financially vulnerable,” SAHA said.