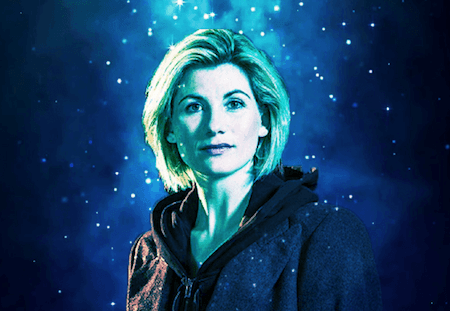 Once upon a time, there was a little girl who dreamed of going into space. She would sit on the floor in the library, cross-legged on the carpet before a big shelf of books and read about a machine that could travel in time and space. She would put on the television, and see the Doctor and the TARDIS, and wish that she could be there too. She wanted to be on the Enterprise, and the Liberator and the Millennium Falcon – and she imagined great adventures, in which she saved the world, the galaxy, and (why not) the universe.

Unfortunately, a Catholic girls’ school in the 1980s was not a great place to harbour such ambitions – and there weren’t many kindred spirits dreaming these particular dreams. They became private stories, told to myself at odd moments, just before falling asleep – but not to be shared. After all, what kind of girl likes Doctor Who? What kind of girl wants to jaunt around time and space?

To say that I am delighted at the news that Jodie Whittaker has been chosen to play the 13th Doctor is a huge understatement. I enjoyed the whole media build up immensely. I was greatly entertained watching good friends rapidly bring themselves up to speed on the rules of tennis in order to predict how long a Wimbledon final might be – so that they could make sure they were on hand when the announcement was made. I watched the trailer with refreshed wonder and a whoop of glee at the reveal.

For me, science fiction – speculative fiction – is a genre that asks us to think about possibility. All good fiction, of course, asks us to expand our horizons by sympathetically imagining the experience of others. But the apparatus of speculative fiction provides us with particular, useful tools to re-imagine what that “other” might be – and to imagine the kinds of worlds that would be needed in order to make radically different kinds of being possible.

Alien life, yes; but also the kinds of human life and organisation that might be brought about by technological or scientific advance – or the radical re-imagining of how power, authority and resources might be e distributed among us. Its best writers, such as Ursula Le Guin, seem to have the power to remake the world.

Science fiction has not, historically, been generous to women. Mothered by Mary Shelley (in Frankenstein and The Last Man), the genre, throughout the first half of the 20th century, becomes predominantly a form of heroic literature, steeped in fantasies of mastery and conquest.

Women were rarely present in this literature, except as trophies or temptations. We survived, in the arresting phrase coined by the great science fiction writer James Tiptree Jr (aka Alice Bradley Sheldon and Raccoona Sheldon): “by ones and two, in the chinks of the world-machine”. A surge of feminist Utopian writing in the 1980s marks the beginning of a shake-up of the genre, which can now delight and surprise in many ways.

Casting a woman as the Doctor seems like something that should have happened years ago. Television is expensive, success is not assured, and risks with a flagship property can be difficult to justify. The incoming production team should be commended for this decision, choosing in Whittaker an actor of great talent whose presence will surely revitalise this ever-changing, fascinating, British institution.

Having a woman as the Doctor will not solve the conditions of vast and cruel inequality under which millions of women live today. It will not alter the grotesquery of the most qualified woman in history being passed over for the job of US president in favour of an overgrown child who wanted a toy and now doesn’t know what to do with it.

But representation and visibility do matter. What I have enjoyed most about this casting news is thinking about how this Doctor – a woman Doctor – was going to be the one that my little girl would grow up seeing. She will be her Doctor. The hero, the adventurer, the person to whom the text turns for moral and intellectual authority – that is a woman now.

A little more of the glass ceiling has cracked. A spanner has been thrown into the workings of the world machine. We are reminded that something different is possible.