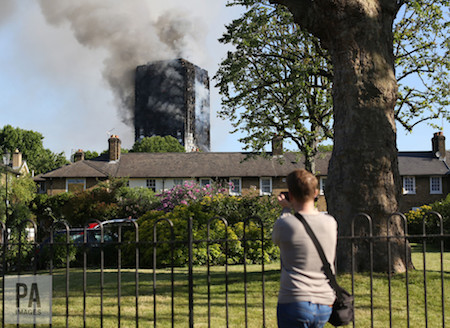 The full horror of the Grenfell Tower fire in west London is still to emerge. Like millions of others, I watched live as TV breakfast reports showed the blaze in its intensity and eyewitnesses told of their devastating experiences and fury at those who allowed this to happen. It was an obviously devastating experience for those involved – and yet another grim spectacle for everyone viewing it from a comfortable distance.

In terms of localised tragedies, it’s been a pitiless few months for the UK. Coming so quickly after the terror attacks in Manchester and London, the Grenfell Tower fire yet again illustrates how fragile life is – and how regularly the modern world brutally crushes it. If it’s not calamity at home, then it’s war, disease, famine and death abroad.

This carries a serious risk: never-ending reports of catastrophe all too easily inculcate despondency and despair, and cement an idea that the world is irretrievably dangerous. At worst, the result is apathy and indifference.

It’s no wonder that psychologists and media theorists put so much work into measuring the impact of such exposure. As Graham Davey of Sussex University writes, bad news items not only lead to a more uneasy worldview, but are also likely to have an impact on individuals’ unrelated personal worries and anxieties.

Mary McNaughton-Cassill, a US-based expert on media consumption and stress, sees media coverage as an “unrelenting flow”, especially when regularly complemented by social media. Part of her advice for coping with an incessant bad news deluge is to simply take a break. As she told New York magazine, we should stop wolfing down too much bad news and “just turn it off” for a while.

Others recommend switching off completely. Businessman and self-help guru Rolf Dobelli argues that “news is to the mind what sugar is to the body”: a toxic substance that makes us passive and increases cognitive errors. It grinds us down, he says, to a state of “learned helplessness” characterised by sarcasm, fatalism and pessimism.

Dobelli prescribes a 30-day “detox” to refresh and relax the news addict, to improve understanding and concentration and free up their time for other things. Anything important to their job, family or community will make it through anyway, he writes; the facts that really matter won’t be lost to the ether.

This is misguided. It’d be foolhardy to reject Dobelli’s arguments completely, but they strike me as both simplistic and potentially damaging to active citizenship. Knowing about society and being aware of its injustices and inequalities means knowing about things well outside the sphere of our personal experience alone.

After all, how can anyone evaluate the quality of their own existence if they don’t understand how others live? How else can they develop empathy for those in situations far less fortunate than their own?

Sticking with the story

In the digital age, when the old ideas of what constitutes “news” are radically changing, news literacy – or more broadly, media literacy – is more important than ever. The sheer quantity of information available to us and the ability of anyone with an internet connection to publish information themselves means that engagement with news becomes absolutely necessary. In order to disregard “fake news”, audiences need to know what reality looks like.

Mastering modern media is vital for succeeding in life, and disengaging completely must not be the default option. Bad news might leave people disgusted and despairing, but they need it to comprehend what is going on. Simple happy endings are not the norm. Dreadful things do happen – they always have. But balance matters. It’s vital to remember that the news that’s reported is reported because media organisations exist to draw attention to the events that disrupt everyday life. The world is not a fundamentally evil place, but it’s the news media’s job to report it when things aren’t right.

The way to cope isn’t to switch off, but to look for the positive. Bad news is often shot through with stirring examples of human kindness. Look at what happened when news of the Grenfell Tower fire first broke: social media was alive with people offering shelter and clothing, to the point where some organisations were overwhelmed with donations. People made their way across London to offer help. Similarly, in three days after the Manchester Terrorist attack, millions of pounds were donated to help those affected.

In the end, we must find a way to digest the worst news we hear – and to respond to it seriously and compassionately without switching off.