Memes, national identity and the globalisation of rage 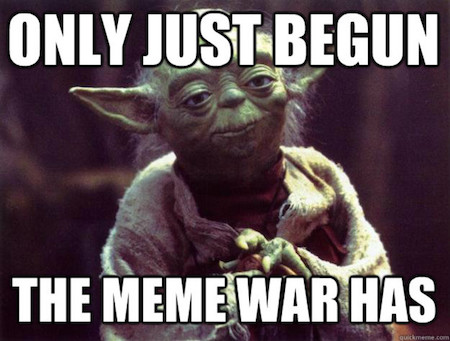 Memes may be all the rage in these heady days of digital trending, but they’re not a new thing. Ever since Richard Dawkins coined the term in his popular 1976 book The Selfish Gene, scientists have been putting memes under the microscope.

For Dawkins, memes were discrete units of cultural inheritance (gossip, images, fashion fads, catchphrases) that, by virtue of their rapid dissemination and adoption, drive cultural evolution, just as genes propel forth our biology.

In other words, memes can change the world with “likes” and “shares”.

There’s even a field dedicated to their study: memetics considers how certain cultural artefacts go “viral”. Mentally and socially “contagious”, memes provide immediate, visual expressions of our common humanity as they jump from brain to brain.

Since memes are simplified versions of reality, their intended meaning can be easily subverted or simplified to serve a new political purpose. Hitler’s appropriation of the sacred Hindu swastika, which symbolised well-being, is a prime example.

Once the brain makes the memetic association, it’s next to impossible for it to restore the original content. What traveller doesn’t think of the Nazis when they see swastikas at holy sites across Southeast Asia?

This is how memes are helping to redraw the boundaries of what constitutes acceptable political discourse, particularly since the 2016 US presidential election, when meme wars raged between left and right.

These online battles, which continue today in America, skewering everyone from the news network CNN to Trump supporters and Hillary enthusiasts, came to France, too, just in time for its 2017 election season.

Memes failed to sway the French citizenry, as several commentators have noted. But France’s meme wars demonstrated the transnational influence of the so-called “alt-right” hate groups that managed to transform Pepe the Frog into a racist mouthpiece and, in doing so, set a precedent for future memetic wars.

The meme maelstrom is pushing us to rethink questions of national identity that have been with us for quite some time.

Since the Enlightenment, Western scholars have largely been sympathetic to the notion of an international, cosmopolitan identity shared by a global citizenry. This was the view promoted in Martha Nussbaum’s 1994 essay on cosmopolitan education, in which she promotes the “embrace of humanity” wherever it is encountered, “undeterred by traits that are strange”, and an eagerness to “understand humanity in its ‘strange’ guises.”

The historian and anthropologist James Clifford, too, saw that Western identity was at a crossroads in the late 20th century. His Predicament of Culture (1988) described modern identity as one that “is always, to varying degrees, ‘inauthentic’: caught between cultures, implicated in others”.

What these cultural critics missed as they gazed across the planet at the height of globalisation was that some elements then just barely on the horizon – including the pain and anger of a less privileged, untraveled, often rural electorate – would soon build serious momentum.

Nor did their visions include the digital advent of an array of anti-cosmopolitan provocateurs, from conservative intellectuals, hackers, reactionaries and anarchists to anti-Semites, fascists, Islamophobes and homophobes, who would eventually form the alt-right.

Fake news and dark memes are not limited to the West, nor to any one political leaning, of course. Many other democracies, some of them secular, are struggling with their own multicultural identities.

The disenfranchised of the world don’t celebrate their global citizenship; they take their political rage to the internet. The Arab world is grappling with online calls to jihadism, and India with violent nationalism that has spawned a wave of Hindu attacks on Muslims.

From Reddit to 4Chan, the anti-cosmopolitans can voice their anti-establishment views anonymously loosening or dispatching entirely with the straitjacket of political correctness.

All of this reflects what author Pankaj Mishra calls the “globalisation of rage”.
His new book, Age of Anger, explores the paranoia, hatred, and pain of those who remain beyond the reach of liberal cosmopolitanism.

Triggered by the influx of new and diverse populations, the conservative instinct seeks out familiarity and attempts to ward off foreignness more intensely than the average. Now, thanks to memes and social media, these defensive impulses can spiral outward much faster, and hit a lot harder.

The use of memes to promote hate complements more traditional forms of communication, such as physical poster boards, signage and advertising. We can see their confluence at universities around the globe.

In May 2017, leaders of an Anglo-Afrikaaner student group at South Africa’s Stellenbosch University updated, in meme-like fashion, old Nazi propaganda posters to publicise their group.

Spurring a debate on privacy, free speech and social media, the college meme war has even gone Ivy League, a surprising twist in the narrative of the dispossessed.

In June 2017, Harvard announced that it would withdraw offers made to ten admitted freshmen for starting a Class of 2021 Facebook group that promoted offensive memes that “mocked sexual assault, the Holocaust and the deaths of children”.

Harvard is not alone. Across the United States, college campuses are ablaze with the debate over what constitutes free speech versus hate speech, demonstrating that we are not at the beginning of something new here, but rather well immersed already in a cultural identity war.

Unlike Nussbaum and other cultural critics, American philosopher Richard Rorty (1931-2007) foresaw the dangers of turning a blind eye to America’s underprivileged. In the 1990s, he envisioned an environment of “sadism[,] which the academic Left has tried to make unacceptable to its students, will come flooding back”.

Ten years after his death, Rorty’s dual predictions that “the gains made in the past forty years by black and brown Americans and by homosexuals will be wiped out” and that “contempt for women will come back into fashion” are now bearing out.

While many of his contemporaries dismissed or ignored Rorty’s dire predictions, philosopher Hannah Arendt had also foreseen these identity wars, as early as 1963.

Dissecting the trail of war criminal Adolf Eichmann, Arendt observed the systemic failure to think among Nazis and their followers and concluded, famously, that evil can easily be banalized.

As we now know only too well, evil can easily become banal online, too.

Image: What’s the meme war all about?
Star Wars Memes/Facebook, CC BY