LATEST NEWS
Home Communications Opinion On the record: Should media report on BLF?

On the record: Should media report on BLF? 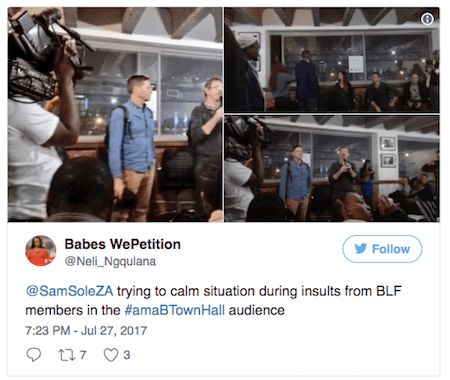 OPINION: It was an ugly scene. One that should have played out in some dictatorship run by a big man with a penchant for stealing state money to feather his nest for eternity… oh wait…

What the Black First Land First invasion of the amaBhungane town hall event, organised to discuss the Gupta Leaks, really showed was that the trove of emails implicating the immigrant family in countless dodgy deals has got under the thick skin of the ‘first family’ and their paid acolytes. Their henchmen – those on the boards of state owned enterprises and those on the ground promoting racism, violence and disinformation – are getting increasingly antsy. They’re selling shares, promising dossiers of information, and attacking the press, the people responsible for kickstarting the fight back against endemic state capture. The reek of desperation is overpowering, but dangerous nevertheless.

Investigative journalist and managing director of amaBhungane, Sam Sole, said as much at the start of the town hall gathering last night. “I’m hoping the stones we are rolling down the hill will be the start of an avalanche,” he said.

The Gupta family’s incredible talent for identifying weakness in those useful to them, and capitalising on that weakness for gain, is matched only by their voracious greed and complete lack of ethics. Their web of captured individuals and entities seems embedded in the very skin of South African society, where it festers and spreads like some foul disease.

The Gupta Leaks, however, have lanced that boil, and the ugliness is spilling out. As it did at the amaBhungane town hall last night.

I watched it unfold via Twitter, following the narrative through people’s tweets. One by Sunday Times columnist and former Financial Mail editor, Barney Mthombothi, struck a chord:

Note to editors: ignore the #BLF. Deny them the oxygen of publicity, which is what these thugs crave #amaBTownHall

His is a point often raised by non-journalist family and friends. Why give people like Andile Mngxitama and his thugs publicity, they ask. Surely by starving him of the media coverage that is clearly his lifeblood, he’ll wither away? Watching the screaming and intimidation that are the hallmarks of the BLF – their brand of intolerance simply doesn’t invite debate – I was tempted to agree. Ignore them, I thought. At first.

Dr Rasmus Kleis Nielsen, director of research at the Reuters Institute for the Study of Journalism at Oxford University, in an interview posted on its website, says: “‘So the reaction businessmen, politicians, leaders often get from journalists, if they have good news, is ‘Well, that’s all well and good, but it’s not news. Our business is not to publicise your business, it’s to challenge you and hold you to account. We will make our own decisions about what we think is newsworthy (even if the positive is true)’. To put it bluntly, “Shit happens; that doesn’t make it news.”

But when ‘shit happens’ that is directly related to stories holding power to account and exposing those businessmen and politicians for the venal creatures they are, then surely we have to report on those who have a small if vocal role in protecting those power players through intimidation and racism?

The BLF are a symptom of the unravelling of the state capture project. Paid goons spouting lines written for them by a ‘white monopoly capital’ firm hailing from a country that was once our colonial master in support of a new colonial immigrant family taking up where previous colonials left off. That Mngxitama and his crew don’t see the irony of this is an indication of how well and truly captured they are.

Andile used to write columns. He was contrarian, controversial, clever. And independent. Deeply sad how he's sold out. #amaBTownHall

As Verashni Pillay tweeted during last night’s ugly confrontation between the BLF and the independent media, Mngxitama did once play an important role in media as a columnist who wrote provocative pieces designed to disrupt the status quo. No longer.

By making the media his enemy, in a sad little attempt to make his paymasters happy, he might be enjoying the publicity he’s reaping from his antics. That doesn’t make him and his small band of followers relevant. They’re a sideshow, the warm up act for the silent prime movers busy creating bots and running disinformation campaigns on social media, and ensuring the Gupta billions get out of the country.

As an aside, the coverage he’s getting doesn’t seem to have garnered Mngxitama a massive following; they’re noisy, but they’re not a mass movement. The EFF have legitimately cornered that market.

#BLF's disgusting racism – paid for, stoked and fanned by the corrupt Gupta & Zuma families – was there for all to see at the #amaBTownHall //t.co/qfSRqHKDMQ

Nevertheless, they’re dangerous, especially now that their paymasters are cornered. If the Guptas decided to permanently hang their hats in Dubai, the BLF and their leader will be left high and dry. Financially and in terms of their reputation.

The South African National Editors Forum has called on journalists and editors at last night’s town hall to lay charges against the BLF. It’s clear many journalists and editors felt afraid, which was no doubt the intention. Nevertheless, they should follow the legal route and file those charges. After all, the BLF broke the terms of the restraining order brought against them by SANEF.

Complete hijacking of the #amaBTownHall by BLF. Chanting, singing and shoving. We can't leave, they're by blocking the door

Ferial Haffajee confronted the BLF head on, as this video shows. Writing in the Huffington Post on Friday morning, Haffajee said BLF’s actions “revealed the extent of state capture” and  “suggests the Gupta network got nervous after an orchestrated and violent disruption. Black First Land First (BLF), a land rights organisation sponsored by the family, tried to gag the meeting on Thursday night”.

“The next thing we knew, amaBhungane managing partner Stefaans Brümmer was lying at our feet after being pushed across the room by BLF leader Andile Mngxitama and his members,” she writes.
amaBhungane, in a statement issued on Friday morning, disputes Mngxitama’s version of events. The BLF said, “Mngxitama walked into the venue and sat down just as the event was about to start. At this stage a group of comrades arrived and started singing. Two white men then approached Mngxitama, who was seated peacefully, in a threatening manner. One white man got close to the President and pushed him and said, “stop your bullshit”. Mngxitama was startled by this and the white man threatened by saying, “tell your people to stop their nonsense”. The white man was evidently physically threatening Mngxitama who in turn pushed the man back in self defence. The comrades subsequently intervened between the President and the white man.”

But amaBhungane said this version is false. It says Brümmer approached Mngxitama where he was seated, followed by his amaBhungane colleague Micah Reddy.

“As it seemed that the persons who were causing the disruption were associated with Mngxitama, I went to him to enter dialogue on how to restore calm. I probably put my hand on his shoulder to make contact. I did not ask him to ‘stop your bullshit’, but I did ask him to “please control your people” or similar words,” Brümmer says.

“Mngxitama stood up, grabbed me with two hands and tried to shove me to the ground, shouting words like ‘you fuck with me’. A second person then threw me to the ground. I offered no resistance.”

amaBhungane noted another incident in which journalist Micah Reddy was “set upon” by a group associated with Mngxitama on July 17 after a television panel discussion in which both of them had participated. “The intervention of studio personnel saved him from apparently serious assault,” the investigative unit said in its statement.

The organisation is discussing its next steps with its lawyers. “…  Mngxitama’s actions and the disruption may contravene a high court order barring him and the BLF from intimidating, harassing, assaulting, threatening or ‘acting in any manner that would constitute an infringement on [the] personal liberty’ of a number of journalists.”

“We ask members of the public who may have filmed the above incident, or any other acts of violence, intimidation or harassment last night, to contact us at info@amabhungane.org. This may be important evidence.”

As Haffajee says, “In the end, despite the planned disruption by an organisation funded by the Gupta family, free expression triumphed. But only just.”

And that’s why we have to report on the BLF. They’re attacking the media’s hard won right to the freedom of expression. They’re bullies trying to shut down debate on South Africa and on the new colonials who’ve made it their business to capture the state for their own benefit. Ignoring them won’t make them go away. Only the continued exposure of their paymasters and those in the government that dance to their tune will ultimately see off the BLF. Because once the boil has been cleansed, and we can nurse our beloved country back to health and honour, and try and build bridges of understanding and respect between all of us who live here, the likes of the BLF will be nothing more than an unpleasant footnote to our story.

I'm genuinely not sure whether to be afraid or to laugh.

#AmabhunganeTownHall BLF's getting way too much publicity. They may be starting to feel relevant. Keep records but don't publish their crap