Bell Pottinger was brought in to re-frame the narrative of ‘state capture‘ by shifting focus from the president and his allies to specifically white South African captains of industry. This article described how the campaign was formulated and it touches on some of the groups involved, including the ANC Youth League (ANCYL) and the MK Veterans Association. In addition, you can read this anonymous report detailing their alleged strategy in more detail. It was shared by the South African Communist Party (SACP), one of the ANC’s own alliance partners, which gives you an idea of how deep the divisions have become within the Tripartite Alliance.

Leaked #GuptaEmails show that the Gupta family footed the bill for Bell Pottinger’s services which came to a cool GBP 100 000 a month (excluding incidental expenses such as a R5 500 000 weekend visit to Johannesburg for a strategy meeting). They also show that the president’s son, Duduzane Zuma, worked directly with them to define the narrative (see here, here and here). The end result was the resurrection and re-purposing of a concept that was little-known outside of certain ANC and communist/socialist circles during the struggle, referred to as “white monopoly capital” (WMC).

The spectre of WMC was used to define an alternative focal point in our national debate; one that takes attention away from the accusations of state capture made against our president and his allies. In this regard, the WMC narrative has been particularly effective at shifting attention away from Bell Pottinger’s (now former) clients. It has also been very successful at re-racialising the South African national discourse, informing debates at the highest political level as we saw this past week at the ANC National Policy Conference where the existence and definition of WMC were key topics of intense argument (see, for example, here, here, here, here and here).

South Africans are justifiably furious at the role that one well-paid firm has played in returning our country’s discourse to a place that we thought we had long left behind. Few deny that we need to have frank discussions about the race-based stratification of our economy and society. However, the crass way in which their campaign re-introduced the concept as a political rhetorical device to shield the allegedly corrupt has meant that it is now much more difficult for our country to navigate this complex debate with any kind of authenticity or nuance.

By converting a highly charged, complex issue into a cheap political tool, Bell Pottinger’s campaign has stolen our country’s ability to constructively address these issues and has brought our damaged society’s darkest feelings and emotions to the surface. This is why South Africans are angry. This anger has even led to Bell Pottinger being reported to its industry body, the British Public and Relations and Communications Association (PRCA), for stirring racial tension in South Africa, while OUTA has similarly announced its intention to take them to task.

I’ve been collecting tweets that mention Bell Pottinger or the Gupta-owned Oakbay account lead, Victoria Geoghegan, for about three weeks now (13 June – 5 July). In that time, I collected over 34,000 tweets. The irony of a PR agency being at the centre of such a massive PR storm is lost on few I think. Let’s see what people have to say about them:

Firstly, below are the daily volumes that I’ve collected so far. As we can see, thousands of tweets have been generated in the last few weeks which is likely what motivated them to apologise. This wasn’t just going to go away.

These tweets are being generated by a variety of communities in South Africa. The kind of sentiment and comments coming out of most communities is overwhelmingly negative with the exception of the usual Radical Economic Transformers (RET) community which introduced the topic of WMC to our discourse in the first place so no surprises there.

Certain tweets went “viral” and were popular across most of the communities, so rather than isolate the top tweets within each community, let us just look at the top ten most popular ones overall which are generally scathing of Bell Pottinger’s actions and involvement:

Dear gatvol South Africans, @BellPottinger's account is public again if you want to continue the conversation. Or tweet them at @BP_Digital

VERY IMPORTANT re #BellPottinger. We have heard rumours regarding our actions. These are the TRUE facts. Please RT widely for awareness. pic.twitter.com/fzweSPSMCM

So Bell Pottinger not only drafted press statements for the ANCYL, it also did so for MKMVA. Talk about taking instructions from London! //t.co/0MQBoGJE2Z

Hey @JThomlinson from @BellPottinger, SA would love to hear from you. Open invite to The Money Show. Monday 6pm ZA time?

We warned y'all, we did. We said " Don't fuck with us, we're South Africans".#CountryDuty pic.twitter.com/CK3PUWquLi

This nice man from Bell Pottinger thought it would be a fun idea to stir up civil war in South Africa … //t.co/NPDYdm0fnH pic.twitter.com/SjmkA8lt0G

A list of the Gupta disciples who were working with Bell Pottinger. ? pic.twitter.com/OikL4H9mVi

SA, we may not be allowed to speak to @BellPottinger, but here is their Managing Director: @JThomlinson I'm sure he'd be happy to "Engage"!

#BellPottinger guilty of inchoate offences under UK Serious Crime Act 2007 (sec 44 to 46) for their part in running #RacialDivide campaigns pic.twitter.com/anY7YswhkZ 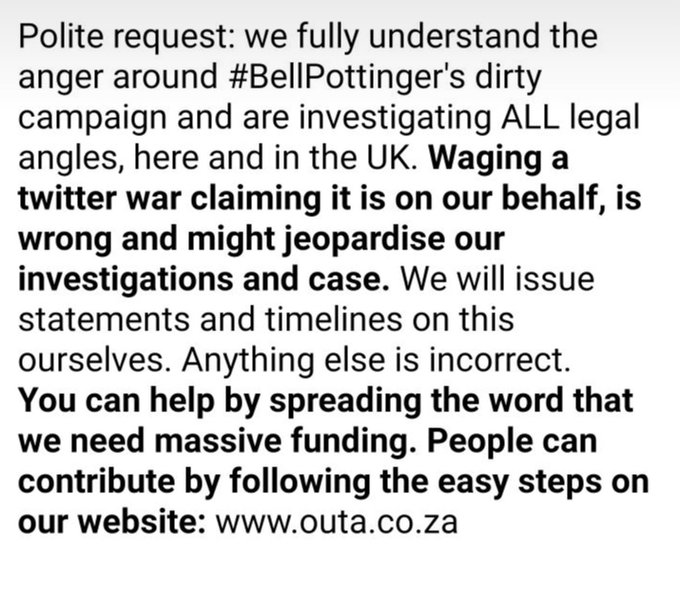 In stark contrast to all other communities stands the Radical Economic Transformers community (so named because the community is the main proponent of the RET ideology). The top most-engaged-with tweet (although this was likely boosted by fake accounts) was a tweet from the @wmc_leaks account (which has now been suspended):

@wmc_leaks: “No links with Guptas or Bell Pottinger, we only favour truth and Black Empowerment unlike #wmcpaidmedia.… //t.co/7aDI5ol9Ym” (original URL).

White people give Bell Pottinger too much credit for "creating" a WMC narrative. Nah, they found WMC already here and just exploited it.

Concept of White Monopoly Capital was coined by SACP in 1962. Long before Bell Pottinger was established //t.co/9k1RG4NTHn

Zwelinzima Vavi '05. “Economic power is still in the hands of white monopoly capital. You worked for Bell Pottinger? //t.co/9k1RG4NTHn

Johann Ruppet was also a Bell Pottinger client until they got the Guptas on board.

This were all good then ??? pic.twitter.com/oNFKFDTKly

The fact that Bell Pottinger used it as a means to distract from Guptas in no way erases the existence of WMC. It exists, and it's corrupt.

No amount of #Faketwitter, #Paidtwitter, "Gupta pawn" , or esp "Bell Pottinger" insults is gonna silence us. U shuld be ashamed not us!

White people have been devil's to indigenous people around the planet. We don't need #bellpottinger to tell us who is destroying this planet

What if apartheid was also a Bell Pottinger invention? pic.twitter.com/76euebxky2

There you have it: a look once again at the main narratives defining our society. One narrative is driven by a specific group while the other represents broadbased sentiment across various groups in our society. Now that Bell Pottinger has apologised, it will be very interesting to see how South Africans react…