The mindblowing world of media tech (With pics and video) 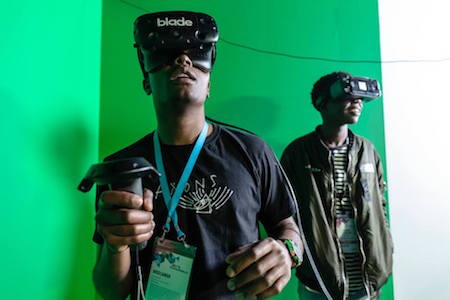 ‘An assault on the senses but in a good way’. That is the best way to describe the Mediatech expo which took place at the Ticketpro Dome last week. Among the sights, smells and sounds, Michael Bratt explored the latest technology trends and products in the media space.

A long queue of people that wound its way down the road seemed to indicate Mediatech was a massive success. Part of its appeal must be attributed to the four feature areas which were created: a virtual reality space where attendees could try their hand at chopping fruit as a ninja warrior (among other games); a drone cage, where the features and capabilities of drone filming were shown off; a 360° camera zone, which showcased what this powerful tech could do; and the big black box, a sound, lighting and visual showcase which dazzled attendees.

Some of the exhibitors also had fascinating products. A South African stall had lifters for televisions and computers, which saw the pieces of equipment rise out of desks and futons before dropping back down into them. A curtain made out of water produced stunning patterns, while a Chinese stand had pyrotechnics which didn’t burn a person if they touched it.

The importance of Mediatech

Simon Robinson, Mediatech co-owner and event organiser, believes seeing the products and experiencing them first hand is what makes the expo so important. Networking is another vital part of it. “People do business with people, they don’t necessarily just do business over the internet. It’s very much about relationships,” he says. Having visited many international shows, Robinson says only a handful of South Africans, probably 100 or so, travel to these, mainly due to how expensive the process is, and that Mediatech is the opportunity to bring these international experiences to the South African market.

Speaking to several exhibitors, a couple of common themes emerge. They all believe that the South African market needs more education in terms of what tech is available and what its capabilities are. They also believe budgets are more constrained locally, but caution that, like with any other technology, you get what you pay for so choosing a less expensive product often sacrifices its quality.

The biggest changes in tech

Advances in technology have seen many changes brought to the spaces represented by the expo. “The biggest changes in technology have been in the broadcast space from linear to OTT digital delivery of content,” Robinson explains. “Within the post production space it has become more software based and less hardware based and this has brought down the cost of post production and the ease with which they can deal with post production. In the live events space we’re having the big change from analogue to digital in audio and then the advent of LED technology and lighting and projection has been a massive change over the years and it has had huge energy saving benefits.”

How far behind is South Africa?

The long-held belief by many is that South Africa is behind the rest of the world technologically, particularly when it comes to bringing new tech products to market. Robinson rubbishes this belief. “South Africa is right up there in terms of unveiling new tech products. We’re right up there, there’s no lag with it. We’re on an international circuit in terms of launching products. Products are launched all the time. We are 100% up to date”.

What is different between the South African market and its international counterparts, Robinson says, are budgets. “You will see productions internationally that are much bigger and all it comes down to is money. From a skill level, from a creative point of view, from a technical point of view we are right up there with the internationals. It’s just budget and it’s size of markets.”

Walking around the expo probably the most noticeable thing was the international presence on display. A large cluster of Chinese companies made up a substantial portion of the exhibition floor, while many of the local distributor stands also had representatives from the international manufacturers that they distribute.

The growth of the expo

Over the years, the number of broadcast, film and production exhibitors at MediaTech has remained around the same level as it is a very niche industry. However the exhibitor numbers have been boosted by the organisers bringing in other vertical sectors into the expo. Another thing on the increase is attendance numbers. When the expo started it had roughly 2 000 visitors, last year that number was recorded at 7 500. For the 2017 edition, Robinson was hoping to see 8 500 come through the doors. What was he most excited about concerning this year’s expo? “My clients being happy… Delivering the right visitors to the clients to come and experience the technology”.

Here are some pics from the expo:

From a niche expo to a full tech extravaganza

Mediatech began 16 years ago, focusing specifically on the broadcast and film industry. Over the years, due to advances in technology, this space has massively grown, but the expo has also evolved to include other offerings. Products and services in the live events sector arrived on the scene four years after its birth. It started when Robinson, who was working at an exhibition organiser, was approached by a publication called Screen Africa who asked to put together a niche technology show for the broadcast, film and production sector.