MOST Award ceremony on Muizenberg beach

Posted By: Glenda Nevillon: October 20, 2017In: MOST Awards
Print Email 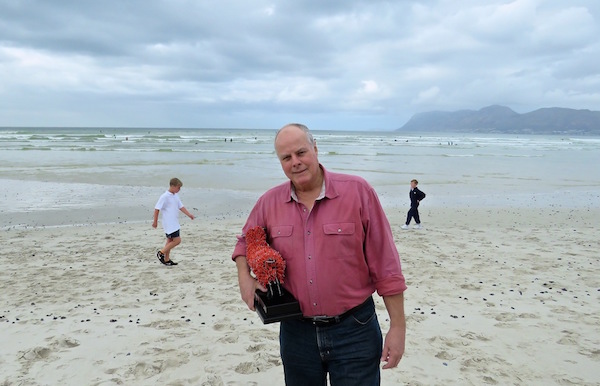 It was a bit of an unusual MOST Awards ceremony: A breakfast at Knead in Muizenberg overlooking Surfer’s Corner instead of the glitz and glam of The Wanderers in Johannesburg.

Who, Bryan Gibson wondered, actually worked in Cape Town on a Friday morning? The beach, despite being an overcast day, was packed.

Gibson was honoured in the 2017 MOST Awards as this year’s Media Agency Legend. But as luck would have it, he was in hospital recovering from hip surgery on the night of the awards, held in September.

“I had no idea,” he said. “Funnily enough it was a friend of mine from our Harley Davidson Club who was visiting me in hospital who told me I’d won an award for being a legend. Then my son Kevin, who works at Vizeum in Cape Town, confirmed it as the agency was also a winner. Took me by surprise,” he said.

Gibson said his family haven’t stopped teasing him since. He was delighted to find out that he actually got to keep the sheep, that it wasn’t a revolving trophy.

Read the story on why Bryan Gibson is the 2017 Media Agency Legend here.

Gibson is still involved in media planning, a subject he is passionate about, saying it is so much more about creativity than anything else. He is the founder and managing director of Third Wave Media in Cape Town.

In brief, after scraping through a Business Science degree, Gibson’s career in advertising started over 40 years ago selling advertising space in the Cape Times to retailers in Woodstock – a dose of reality after the blue skies of academia. He then joined an agency called De Villiers & Schonfeldt as a media planner, before moving to Rightford, Searle-Tripp & Makin (which later became Ogilvy) in 1975 as the media manager. He liked the agency so decided to stick around as long as he could. To that end he has been media director, client service director, strategic planner and managing director at different times, but all at Ogilvy.

He started Opt!mum Media in the late ’90s while still running Ogilvy media, and in 2006 he became fulltime MD of Opt!mum due to its dramatic growth. In 2010 he took the gap to start his own company – Thirdwave Media.

Gibson has a long-suffering wife, three sons aged between 33 and 39, one grandson and three cats. He plays the saxophone and surfed a longboard from the early sixties until he took up golf – a move about which he has second thoughts almost every Sunday. To relax he rides his Harley.