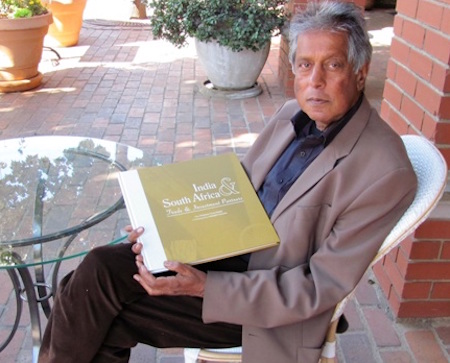 Govin Reddy’s legacy will live on. The man who played an enormous role in the transformation of the media in South Africa, particularly the broadcast sector, died on Friday morning after a long illness.

Sanef regional convenor, KwaZulu-Natal, Judy Sandison, who was appointed by Reddy to lead the countrywide transformation of SABC radio news in 1994 after the first democratic elections, said: “Govin was very supportive of all our transformation initiatives, which was crucial as there was some concerted resistance to some of the changes. He had vision and drive and was not deterred by the obstacles in our way. He played a critical role in ensuring that the public broadcaster was in a position to really serve our audiences professionally and ethically. His legacy lives on.”

In an SABC interview, Reddy’s son, media activist Micah, said his father was described as a complicated patient. “Ultimately it was cancer that he died of but he put up a valiant struggle. As hard as it was to see him go through, he was able to recount some of his stories and there were very precious moments in the past few weeks.”

His daughter Priya Reddy, communications director for the City of Cape Town, said in a Facebook post, “The messages, calls and emails of support and the acknowledgment of my father’s professional legacy have been such a comfort to us all since his passing. Thank you.”

An anti-apartheid activist, who was imprisoned, banned and exiled in the 1970s and 1980s, Reddy’s return to South Africa saw him play a major role in media. According to The Journalist, he was CEO of SABC Radio, CEO of the Mail & Guardian newspaper, Director of the Media Leadership Institute at Rhodes University, head of the English Service of Inter Press Service in Rome and President of the London-based Commonwealth Broadcasting Association.

From 2006 to 2009 Reddy was based in Mumbai as India Manager of Brand South Africa where he was instrumental in setting up the South Africa-India Business Council. On his return, he was appointed Professor Extraordinary by the Universities of Stellenbosch (journalism) and Pretoria (political science). He also served on the boards of the National Lotteries Commission, the Centre for Indian Studies at Wits University, and the Institutional Forum at UNISA.

He was a member of The Media magazine’s board, and recently worked with the Iconic Group and our publisher, Wag the Dog Publishers, editing a book on India and South African trade relations, India & South Africa Trade & Investment Partners.

Reddy was appalled at what has happened to the SABC in recent years and was one of several who wrote an open letter to President Jacob Zuma, former minister Faith Muthambi and former board chairman, Professor Mbulaheni Maguvhe to express their concern.

“This is a betrayal not only of the South African public, which the SABC is called upon to serve without fear or favour, but also of many people in civil society, as well as and broadcasting specialists from abroad, who worked hard to produce a public broadcaster to rival the best in the world. That objective was achieved alongside the dawn of our new democracy. The SABC was then freed from the shackles of apartheid to embrace the norms and values of the new society – with a new board and management to carry out its new mandate. We were part of that founding process, and we feel bound to raise our voices against its despoliation,” they wrote.

We asked various South African journalists and media executives who worked with Reddy over the years to share their thoughts.

A pioneer in the media world

I first met Govin Reddy when I was a schoolgirl in Durban. I had joined a youth group run by the Institute of Race Relations and one by one its conveners had left – either banned or fled into exile, or, as in the case of Bridgette Mabandla, both.

Govin took over the running of Race Relations sometime in the mid to late ’70s but it wasn’t long before he was banned too. He then opened a bookshop in Salisbury Arcade in the city.

It was a real intellectual haven for a curious young person such as myself, and quite frequently I would catch the bus from school to town where I would visit the bookshop and him.

It was through him I learned at first hand what political repression meant. If he was talking to me and someone else came into the shop, he would move away so as not to break his banning order.

He left the country soon afterwards and it was only several years later when he was in Rome, I heard from him again. He was then running IPS in Rome. By then I was a reporter on a daily newspaper, and often struggled to get stories of the worsening apartheid atrocities into the paper with the space we believed they deserved.

IPS became an important outlet, although in my case I did not use my own byline on stories more out of fear of retribution from my editors than the security police!

So we dealt through the years at arms length, until 1993/94 when he returned from exile. He went into radio, taking on the then apparently intractable and monolithic SABC. I had never before considered radio – but suddenly a new world opened. He generously found a place for me – political editor – in Parliament.

Although Govin is known for having changed the English service from a somewhat quaint and cautious service to an altogether more adventurous offering, it was actually a relatively small part of the transformation of radio. Far more important were the African-language stations, which had been ghetto-ised ‘bantustan’ stations before and now fell under the news department.

Govin was at the forefront of driving that important change in culture and in serving the public. He, too, was one of the many casualties of the SABC’s drift into more factional politics. Soon after that he went into teaching at academic institutions.

Govin was generous with his time and his guidance. He was a pioneer in the media world. He was a true South African in so many ways and had no time for racism or intolerance or political posturing.

A quiet giant, driving change. We shall miss him. ~ Pippa Green

I think Govin Reddy was best known for liberating the SABC after apartheid. He was part of that front guard – which included Joe Thloloe and John Mattison – who were the key people charged with changing the SABC into a public broadcaster. I think that was one of his greatest services to media in South Africa. As head of radio, he had a difficult job, not least breaking up all the stations into public broadcasting operations or commercial stations. He was also instrumental in creating SAFM, and despite being confronted by the racism of Anglo-Saxon South Africans, he battled through it. For many of us, he created the space for us to become journalists. ~ Ferial Haffajee

A huge contribution to post-Apartheid media

Govin Reddy is one of those people who made a huge contribution to the media industry post-democracy. But his contribution started with his commitment to the anti-apartheid struggle.

Over a period of more than 20 years, I interacted with him in several of his many guises in media, before the time he was head of radio news at the SABC, and particularly when he was CEO of the Mail and Guardian.

I belonged to a group who was hoping to invest in the media industry and we expressed interest in buying a part or the whole of the Mail and Guardian. Reddy was determined that whoever bought the M&G had to protect its legacy, which meant that it would not quite be mainstream and would provide a decent and intellectual read for progressive-minded people. In the end, we could not agree on a price and, fortunately, for the M&G, it found a new owner who allowed it to continue mainly in the way it had always been.

Reddy was one of those journalists who was multi-faceted and proved himself in many different situations, from writing and editing, to running reasonably large media organisations, in academia, and even being involved in international work on behalf of South Africa.

I last spoke to him a few years ago, when he was already part of the National Lotteries Board – one of his last public service assignments – and he bemoaned the fact that he was not playing more of a role in a media industry that had become increasingly juniorised over the years. ~Ryland Fisher, independent media professional

A man of principle

I had the pleasure of working with Govin on the inaugural board of the MDDA and sharing with him our passion for golf. Govin was quiet and unassuming but determined to ensure that the right thing was done in everything he tackled. A friendly man but someone who could not abide duplicity – his favourite topic being how so many South Africans who openly supported the apartheid regime could move so guiltlessly to befriend the ANC after 1994.

He was a man of principle and great wisdom who could have done so much more for the broadcast industry in South Africa. ~ Chris Moerdyk