Recapturing the SABC: Moment of truth for Minister Ayanda Dlodlo 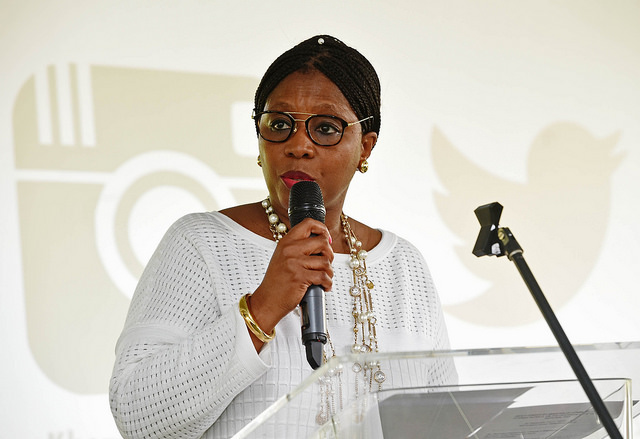 The optimism at the beginning of the year that the good ship SABC was finally sailing towards a sustainable future, steered by a capable board and suitably qualified executives, has taken water over the past few weeks. Once more, the hand of President Jacob Zuma is clearly visible on the tiller.

The public broadcaster is once more being battered by accusations of ‘state recapture’ as Zuma delays appointing a board that has gone through a vigorous parliamentary process and has been vetted by state security. He missed the deadline. It is R977 million in the red as a result of appalling management under disgraced former COO, Hlaudi Motsoeneng, a Zuma acolyte. Money generated by television licence fees has plummeted, as has adspend. It is being run by an acting CEO, CFO and COO. The presidency has held suspect meetings with SABC journalists. And Zuma stands accused of flouting the Constitution once more.

What is going on at the SABC? Kate Skinner, broadcasting researcher and policy analyst, who earlier this year wrote of “green shoots” beginning to sprout at the broadcaster, is concerned over the delay in appointing the new board.

“My sense is that these are delaying tactics,” she told The Media Online. “There really is no good reason. Parliament did a very thorough job. CVs were on the Parly website, vetted by Parly and by civil society.”

Skinner points out that candidates were subjected to a “very thorough interview process” and that Zuma had three weeks before the deadline to “apply his mind” to the suggested nominees. The only role the president should play in this process is to appoint the chairman and deputy chairman. Yet his office claims the delay is due to the president conducting his own “vetting process”. The communications minister, Ayanda Dlodlo, in attempting to justify this, pointed to the Ellen Tshabalala scandal, in which it was discovered that the SABC board chairman had lied about her qualifications.

The Tshabalala issue, and countless others, not least a scathing report by former public protector Thuli Madonsela titled When Governance and Ethics Fail on severe lapses during Motsoeneng’s reign, finally resulted in a parliamentary investigation via an ad hoc committee into the SABC’s complex affairs.

“So much good has happened with the ad hoc committee report and the good work of the interim board. If the president really cared about the SABC he would have done his final checks (although unnecessary) in the three weeks before the deadline. He started doing his vetting after the deadline. We need to point that out! Why start after the deadline? Totally unacceptable!” says Skinner.

Force Zuma to do his job

Media Monitoring Africa’s executive director, William Bird, says the organisation will be launching legal action against the president to “force him to do his job”.

“It is a great pity it has come down to this again. There are those who complain about turning to the courts but we wouldn’t have to if those in leadership followed the law and did what they are legally bound to do,” he says.

The Economic Freedom Fighters wrote to Zuma telling him that unless he confirmed the board’s appointment by Monday night, they too would take him to court, Independent Media reported. “We demand that the president should appoint members of the board of the SABC from the Assembly’s recommended names, after a due process, no later than close of business on Monday. Should the president fail to do so, the EFF will immediately institute legal proceedings before the Constitutional Court on an urgent basis, seeking declaratory orders,” the party writes. Zuma has not done so.

“If a specific political party or faction within that party captures the SABC, it will have a potentially catastrophic impact on the quality of democracy”.

As South Africa is held in the grip of ANC factional politics in the lead up to the party’s elective conference in December, the party or “faction” of the party in this instance that “captures” the SABC controls the narrative. For Zuma, his candidate, Nkosazana Dlamini-Zuma, and his supporters, hanging on to the levers of power at the SABC is a crucial weapon against other candidates such as Cyril Ramaphosa, Lindiwe Sisulu and Zweli Mkhize. Then, of course, there are the national elections in 2019…

Skinner says involvement of various ministers in the affairs of the SABC and who runs the broadcaster has led to “huge instability”. And that lies at the heart of the court case launched by the SOS Coalition and Media Monitoring Africa.

“We shouldn’t have the minister making these appointments. The board alone should make these appointments. SOS and MMA have in fact taken the matter to court and we are still waiting for the final judgment,” she says. “Just to clarify this court case pre-dates the present crisis. Over many years SOS has been tracking problems with the appointment of execs. The Coalition has constantly stated that the Minister should have no role. The court case is about this issue. The bottom line is that the board should be appointing execs.”

Civil society, unions and other stakeholders are concerned. SAFTU, the new union headed by former Cosatu chief, Zwelinzima Vavi, says it is “alarmed” at Zuma’s long delay in appointing the board. “… there is now a fear that it is being recaptured by the corrupt faction which sought to use it as a vehicle for their propaganda and who were responsible for the SABC’s descent into both financial and political bankruptcy,” it said.

“The SABC 8 journalists – who were fired, and later reinstated, for objecting to former Chief Operating Office (COO), Hlaudi Motsoeneng’s policy of no longer airing footage of violent protests – have written an open letter in which they register their ‘alarm and deepest disappointment at the reckless abandon to which the public broadcaster has descended. We are extremely concerned at the governance crisis at the SABC. We believe that a recapture project of the public broadcaster is afoot…’”

The Presidency has reacted with “deep concern” to the letter written by the SABC 8. The group was also worried by a meeting held by the Presidency attended by SABC’s current acting group executive news, Kenneth Makatees, and national TV News Editor and then acting head of TV News, Nyana Molete, brought to light by DA spokesperson and shadow minister of communications, Phumzile van Damme. The SABC 8 called the meeting “injudicious” and said SABC news heads should “exercise more circumspection in the future and protect the newsroom from perceptions of bias”.

The president’s spokesperson Bongani Ngqulunga said, “The Presidency is surprised and concerned by the utterances of the group” adding that, “The posture of the ‘SABC 8’ group of journalists raises serious questions as it gives an impression, that in their view, the Presidency should not meet with or talk to SABC journalists”.

Meanwhile, the chairman of Parliament’s portfolio committee on communications, Humphrey Maxegwana, says Zuma has had enough time to appoint the new board. “The [interim] SABC board was going out on September 26. We think it was enough time for the president to have done all the processes needed so that the matter was concluded by the 26th. If they started the process after receiving the names on 6 September, they would have completed it in time.”

Compounding the broadcaster’s problems is the fact that the SABC is once more battling to stay afloat in what some are calling its worst financial crisis yet. It has requested a R3 billion injection of cash from Treasury, already under enormous pressure as it bails out more flailing state owned enterprises.

Back to the delay…

Which brings us back to why Zuma is delaying the appointment of this particular board. If it is not compliant, and it brings on board independent-minded management, the control ‘uBaba’ has had through ministers such as Faith Muthambi (former communications minister) and Motsoeneng will be diluted.

“The execs (COO, CFO, CEO) need to be urgently appointed and now the Minister has free reign. This of course is totally unacceptable for a public broadcaster. We shouldn’t have the minister making these appointments. The Board alone should make these appointments,” says Skinner

At this point, she says, the only person with the power to stop the president’s march towards recapturing the SABC is current communications minister, Ayanda Dlodlo.

“I think she should be pushing the President to appoint the board. There is no other way forward if we want a public broadcaster,” Skinner says. “She has played a very positive role up until now but she must show her strength and stand up to the president and say that the only way forward is for the board to be put in place. This is her moment of truth!”

Access to information for millions of South Africans is why. It's worth fixing. //t.co/Og4iJyOkmh

Because like any socialist economy, you need control of the media to implement your policies. SABC's reach on all platforms is 34m adults.

I respectfully disagree. Lots of people depend on it for news & entertainment. It really just needs good (uncorrupted) management.

What must our gogos watch?