Jobs safe and investment guaranteed as Mail & Guardian is sold 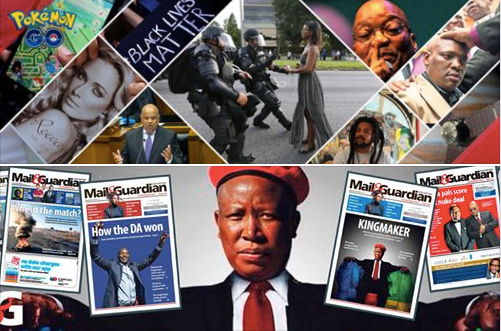 While the exact numbers of the sale of the Mail & Guardian to US-based non-profit the Media Development Investment Fund (MDIF) remain unknown, as the agreement is still subject to a number of “conditions precedent as well as regulatory approvals”, its CEO (and now minority shareholder) Hoosain Karjieker says investment will be made to stabilise the historic newspaper.

“There will be a greater emphasis on our digital output where MDIF will share with us their experiences from the many countries across the world where they currently are invested,” Karjieker told The Media Online. “Print continues to generate good revenues, and we will continue to leverage the strength of the brand in this regard.”

Rumours about the much-anticipated sale of the M&G resurfaced late in November as the board met to discuss bids. Even the name of Shaka Sisulu, scion of the great political family, was mentioned as a possible bidder. At the time, Karjieker told us, “Please note that we are in the middle of discussions and we won’t be commenting until the process is finalised”, and he added, “Given the reputation of the M&G brand, naturally there will be lots of speculation. Regrettably given the sensitivities around these discussions right now, we cannot share any more detail as yet.”

But after the sale went through, Karjieker confirmed the seven bidders involved were South African. Nevertheless, former owner (Zimbabwean) Trevor Ncube and his board decided to go with the MDIF as the majority shareholder.

“They were the ideal partner, given that they already were a shareholder in the business for the past 14 years – and they are aware of the challenges the business is currently experiencing,” Karjieker said.

In a story published by the Mail & Guardian announcing the sale, CEO of the MDIF, Harlan Mandel, said the non-profit “knows the company intimately”.

“MDIF has worked with M&G for more than a decade and knows the company intimately,” said MDIF CEO Harlan Mandel. The New York based organisation, founded in 1996, is reported to have invested $163-million in over 113 publications across 39 countries. It extended a loan to the M&G back in 2003.

Mandel said the MDIF had invested in the M&G because it is a “uniquely important media organisation with a great future. Its independent reporting has a profound impact on the national debate and it is a beacon for independent journalism across the continent, and indeed the world. We are committed to building on this legacy and re-establishing M&G as a commercially and journalistically dynamic institution at this important time in South African politics”.

Karjieker said jobs at the paper were safe. “We expect to develop and reconfigure our business model over the coming weeks and months,” he said, but “right now the focus is on stabilising the business”.

Mandel talked about being committed to rebuilding the newspaper “commercially and journalistically”. Commercially, of course, means increasing the M&G’s revenue stream. Karjieker wasn’t will to discuss those plans yet, saying only, “We do expect to make some exciting announcements over the coming weeks and months about some of the ideas that we have. These will ensure that the M&G once again regains its leadership place in the media landscape as the home for high quality, credible and authentic journalism”.

And his role as CEO and shareholder? “I will be expected to continue to lead the turnaround of the business guided by the input from our shareholders, and I will be held accountable to an agreed set of performance criteria that will be enhanced by a more stable environment,” he said.

In the meantime, former publisher Trevor Ncube will be focusing on his media operations in Zimbabwe. In a piece published by the Daily Maverick, Ncube said, “Change is what keeps us media people awake at night. I am glad that the end of my stewardship of the M&G coincides with changing fortunes in my beloved homeland of Zimbabwe. You couldn’t script this kind of scenario. Thank you to everyone who has been part of this incredible journey.

“I have always believed that the M&G should remain a pillar of the South African democracy, and it should exist well beyond any single individual or shareholder,” Ncube said. “Ownership of the M&G is equivalent to carrying a baton that gets passed on from generation to generation with just this underlying principle: Editorial independence is sacrosanct. I have often said my role over the past 15 years has been more of a custodian of a great South African asset than an owner.”