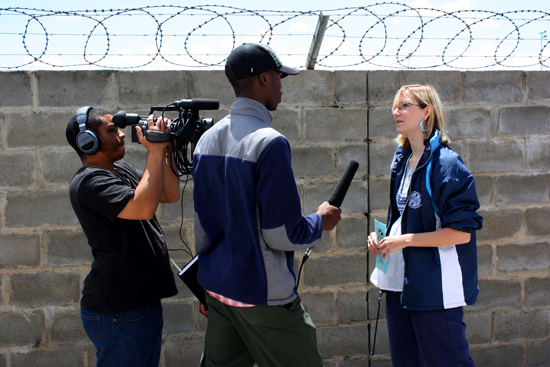 Community television station, Cape Town TV, was robbed at gunpoint on Thursday, with the gunmen escaping with three cameras as well as crew members’ wallets, cellphones and other personal belongings.

It was a huge blow for the station, which is housed in an industrial business park in the suburb of Observatory. The robbers struck at around 11.30am.

Karen Thorne, founder and station manager of CTV, said studio staff were locked up as well as being physically and verbally abused. “The studio is over the quad from the management offices so we had no idea what was going on,” she told The Media Online. “Normal TV stations are usually located in more secure areas but we rely on the business park’s security.”

Thorne said there have been a spate of robberies in the area, but she was concerned that the robbers’ motives might be more complex and related to issues of media freedom. “Was it robbery or intimidation?” she asked. “We received a security assessment today and there’s feeling there might be more to it.”

Thorne said the cameras stolen by the robbers had been donated by MultiChoice late last year. She said they were “pretty old but good”, but would probably only fetch around R5000 on the street, but the replacement value was around R600 000. “We hadn’t yet put them on our insurance,” she said. “We’ve had to bring back our old, decommissioned cameras in order to continue broadcasting.”

Staff were still “feeling shaky” after the traumatic event. “It was a huge blow to them,” said Thorne. “We’re trying to replace their cellphones but one guy lost all his qualification papers. And of course we’re all feeling a lot more vulnerable now.”

Thorne said she and staff were touched by the support they had received from local communities and other media outlets. “It’s been very heartwarming,” she said. “People love Cape Town TV, and see it as THEIR TV station. They’re giving donations, and offering help and some have even offered to host a benefit concert to raise funds for us.”

In the meantime, though, security is paramount. Thorne said they were concerned about the lapse in security that allowed such a robbery to take place, but that the incident had spurred a reassessment by the complex’s managers, who were now investing in more extensive security measures. She said they were working with other tenants, such as AFDA (The South African School of Motion Picture Medium and Live Performance) as well as the local Observatory Improvement District group that is working to make the suburb safer.