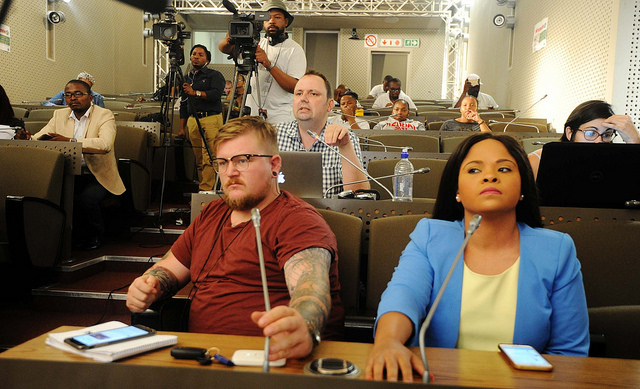 Media at a briefing in Parliament. Photo: GCIS


OPINION: Some of the older hands among South Africa’s journalists will be experiencing a bit of been-there-done-that, here we go again, déjà vu with the departure of Jacob Zuma and the arrival of Cyril Ramaphosa.

Those old hands will remember throwing out a lot of the rules of journalism during the apartheid years to balance the iniquity of the system.

And then, with the arrival of democracy under the leadership of Nelson Mandela, the rules of journalism had to be re-established to ensure a credible free press became part of society. It wasn’t all that difficult because Mandela was not only approachable but someone who created excellent relationships with the news media. Which meant speculation was limited.

Not too many years into the Zuma era, that same news media was faced with so much obfuscation, litigation, ducking and diving and outright lies that once again, a lot of the rules had to be turfed out to compensate for, among other things, the blatant flaunting of the Constitution and brazen self-enrichment.

That Zuma was ultimately recalled by his party and effectively marginalised in terms of his influence on government policy was largely due to continued pressure by most of the news media.

Now, for the second time in recently history, South Africa’s news media is faced with having to regroup and start applying all those rules of ethical journalism that were turfed out almost a decade ago.

How long this will take is moot because the difference between the news media now and that in 1994 is basically financial desperation. Times are extremely tough for our newspapers, radio and television stations. The internet and increased competition has wrought havoc on profits.

As a result, most have to balance ethical journalism with the underlying need for sensationalism to boost sales.

Frankly, I am not holding my breath that this transition will be as quick and as smooth as it was in 1994. It is, however, going to be fascinating because my guess is that those media that don’t give two sides of the story and continue along the path of sensationalism will end up meeting their end a lot sooner than they imagined.

Market research shows that the consumer of 2018 is desperately in search of someone or something to trust. This now forms the basis of modern marketing strategy and it’s not a bad strategy to embrace for news media wishing to survive.