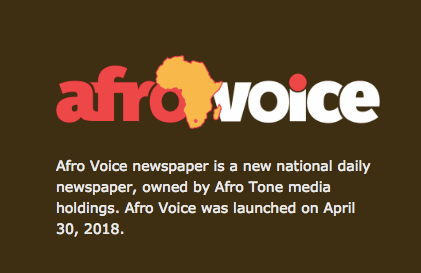 AfroVoice, the newspaper formerly known as The New Age, was summarily closed down yesterday afternoon, with staff told not to return to work.

The newspaper and its broadcast partner, AfroWorld View (previously ANN7), were bought from the Gupta family in 2017 by Mzwanele Manyi, a known Gupta associate and supporter and regular pundit on ANN7.

BREAKING: AfroVoice newspaper is closing down! Staff members were told in a meeting less than 30 minutes ago not to come to work in July because the paper is closing! Staff will get paid for July even though they will not be working.

At the time, Manyi said no jobs were on the line at either the newspaper or the TV station. Even back in August 2017, staff had been left with little job security after the Gupta family left for Dubai and their business empire in South Africa came under increasing pressure. At the time, a staffer told News24.com, Manyi had met with staff and told them their jobs were safe “which came as a relief to us all as we have been in limbo for a long time”. The staff member said they had been living month-to-month”. They were told Manyi was even looking for new staff to bolster capacity.

But 10 months later, it’s clear Manyi’s mission to mould the two businesses into “an increasingly important and relevant part of the South African media landscape”, as he said in a statement at the time, has not come to pass. In March, reports claimed staff hadn’t been paid and Manyi was “hiding in his office” to avoid them.

Shortly afterwards, both businesses went through a rebranding process in an effort to shrug off their Gupta-linked past, and enter a future unburdened by the relationship with the controversial family. Manyi had bought the businesses through a ‘vendor financing deal’ with the Guptas. In a statement issued by the Gupta’s Oakbay Resources at the time, Manyi said he was “particularly impressed that the shareholders of Oakbay have agreed to do a vendor financing at acceptable terms as part of their commitment to transformation and to expedite the transaction”.

As recently as 5 June, Manyi was full of plans for both businesses. At a press conference, he announced Unathi Mguye, Sifiso Mthethwa and Zamaswazi Dlamini-Mandela as the new shareholders of the business. He promised no editorial interference, and had even met with the South African National Editors Forum.

@MzwaneleManyi just can’t win. He realizes like everyone else that the New Age newspaper was more like Pravda. Wasn’t there to make money but to give the government and ANC a voice at a price. He closes the damn thing, it is said he’s callous as workers will be out in the street.

The New Age, during the Zuma administration, was the beneficiary of massive government spend, not just in advertising, but also in term of event sponsorship such as The New Age business breakfasts, which cost the now ailing Eskom millions. It mattered not that the newspaper was not credited by the Audit Bureau of Circulations, as government money flowed in.

Manyi, as Quaanita Hunter pointed out in a piece published by the Daily Maverick, was probably anticipating a Nkosazana Dlamini-Zuma win at the ANC’s elective conference in December 2017. “… Manyi learnt, the media business was not fun and games. The potential of attracting advertisements outside of government channels was bleak”.

And she wrote, “For Manyi, who has come from the Government Communication space, a newspaper would be easy money. When you look at how much government, provincial governments and municipalities spend on adverts for tenders, jobs and programmes, the business can seem tempting. But it seemed politics was not on his side. No minister or high-ranking bureaucrat wants to be seen within an arm’s length of the Guptas and their associates.”

When the gravy train runs out of gravy.
Next step?
Audit the commission & rebates of any media agency that ever booked an ad with #TheNewAge & @afroworldview
@AMASACapeTown @AMASAJoburg @MediaTMO

Of course, the victims in this sorry story are the staff. Many of them are young, and are now tarred with the Gupta brush.

#TheNewAge My heart goes out to all affected by the closing down of The New Age.Behind the politics were ordinary men and women showing up for work to earn a living to provide for their families or carving out careers for themselves and are now unemployed.?

They’re pinning their hopes on being absorbed into AfroWorld View. The station once known as ANN7 has not had its contract to air on the DStv platform renewed by MultiChoice. It, like dozens of other hopeful new broadcasters, is competing for that spot. The winner will be announced at the end of July. Manyi has said he is “quietly confident” the station would retain the slot.

“Afro Worldview is a going concern that poses virtually no risks to MultiChoice,” he said.

One wonders if remaining staff are as confident.