The New Age experiment: Government’s attempt to control the media has done industry no favours 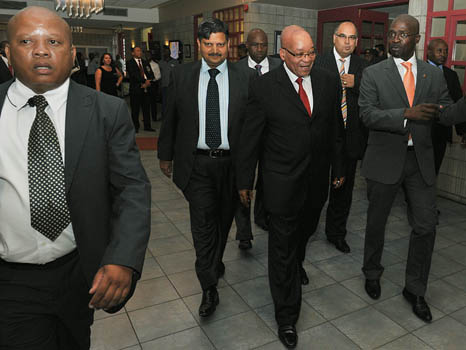 
The New Age newspaper and its sister 24/7 television news channel ANN7 were part of a project by elements of the ANC and business allies to create media owners who were not just subservient to the party, but aligned to a faction within it.

Rajesh Sundaram, who was brought from India to start up the television station, published a book earlier in 2018, Behind the Scenes at Gupta TV, which told the tragicomic story of President Jacob Zuma’s hands-on and personal involvement in the planning of the station. Sundaram fled the chaos of the station early, fearing for his life.

Vuyo Mvoko, the first prospective editor of New Age, wrote last week that the first approach to run the paper came from Zuma himself. Mvoko didn’t even last for the first edition, resigning with his team in the chaotic run-up.

The Guptas argued that they were importing a new business model from India: give the government positive coverage in exchange for advertising and subscriptions. They delivered their side of the bargain, with fawning coverage, but government never quite came through with enough support to make the operation viable. It did not matter too much, as the Guptas’ payback came in other crooked ways and the paper served to keep them on side with what was then the dominant faction in the governing party.

But when Zuma fell and the Guptas had to relocate to Dubai, they passed their media operation on to someone they could rely on to continue in the same fashion, former government spokesperson Mzwanele Manyi. At the time, I called this a “hospital pass”, the rugby expression for a desperate throw that is likely to put the recipient into high care.

Manyi announced about two months ago that he was rebranding and going “respectable” and “mainstream”, breaking all ties with the Guptas, replacing the imported managers with locals and promoting fair and balanced reporting. He took the first few steps to cleaning up the operation, but it was too late. He closed the newspaper at the end of June 2018.

His television channel, now named Afro View, loses its contract with pay-TV provider MultiChoice in six weeks, and there is open bidding under way for this channel. WhileAfro View is among the shortlisted bidders, and Manyi is confident that giving it to him is the only “rational” decision because he has the infrastructure and staff, this is unlikely. The association with the Guptas and Manyi have damaged MultiChoice’s credibility and integrity.

Manyi’s illusionary empire looks fragile, to say the least. In his wake, he will leave a number of jobless journalists whose reputations have been damaged by the association with this tainted enterprise.

These developments signalled an important change in the ANC approach to the media. Having tried to use political and financial pressure to knock the private media into shape, and being frustrated, they had turned to the law, proposing a statutory media tribunal to oversee the print media and secrecy laws that would restrict the work of investigative reporters. When that met resistance, the new approach was to assist their friends and allies – the Guptas and Survés – to take control of significant national media interests. Those who criticised this approach were branded as “anti-ANC” or “anti-transformation”.

It was no coincidence that it was at this time that the ANC took its most direct control over the SABC and it became little more than a crude mouthpiece of the Zuma presidency.

These new owners and managers also worked hard to undermine industry institutions and structures. They left the SA National Editors Forum (Sanef), the self-regulatory Media Council and the Audit Bureau of Circulation (ABC) and effectively destroyed the Newspaper Press Union.

The industry was left reeling, with the bodies that spoke for it as an organised force much weakened. It seemed like a systematic, multi-pronged attack. Most damaging was the attempt to destroy the Media Council, as this put a large section of the media outside of self-regulation. Since the ANC had long argued that there needed to be stronger self-regulation, it was ironic that its closest allies worked hard to destroy what self-regulation there was.

Some journalists, particularly those who ran these outlets, argued that this was an opportunity to shift the dominant media narrative, introduce voices that were previously excluded and cover the country better. That call had resonance, because few could deny there was a need for more and fresh voices and a greater diversity and range of coverage.

But the only fresh narrative we got at the new Sekunjalo Independent Media was extensive, laudatory coverage of their boss, Survé. The only investigative journalism was when they attacked their industry rivals and critics, and here they relied more on rhetoric and maliciousness than research or facts.

When one of the respected, critical journalists Survé had fired, Terry Bell, took a close look at his CV, this new media owner was exposed as a charlatan and fantasist.

New Age/Afro Voice boasted that it would cover all nine provinces and end the news dominance of the big cities, but their amateurish, one-person bureaus in these areas only seemed to reinforce the prejudice that nothing interesting happened in the rural areas.

Most blatant though was ANN7/Afro WorldView, who paraded as their experts and analysts some of the country’s most discredited scoundrels and thugs.

It recently emerged that Sekunjalo Independent Media has been raking up huge losses and has an imminent deadline to repay its debt to the Public Investment Corporation (PIC). It seems this party is also coming to a damaging end.

There are important lessons from the imminent failure of these attempts to install government-friendly media owners.

The first is that it is tough – if not impossible – to run government-supporting media when the ruling party is fractious and directionless. It is hard to follow your generals when they themselves are not sure where they are headed.

The second is that media that sets out determinedly to support the government produces bad and dull journalism, and has little interest for those who really want to know what is going on. Most of all, it lacks credibility, and that means it has little impact.

South Africa’s most credible and effective journalists – the ones government itself follows avidly – are those who produce good, thorough, independent and critical journalism.

At the moment, the most influential journalists are the investigative reporters who have tackled corruption and bad governance, and been the toughest on the ANC. Jacques Pauw’s book The President’s Keepers, on “those who keep Zuma out of prison”, sold more copies in a few weeks than the Gupta newspaper did in a year.

What effective government needs – and few recognise – is authoritative, credible, authentic mass media. This means letting journalists get on with it. The attempt to control large swathes of our media has left the industry weaker, the country bereft and the ANC itself short of the kind of information and public debate they need to dig themselves out of the hole they are in.

We have already heard hints that ANC leaders are trying to influence the bidding for a new news channel. EFF chief Julius Malema – who often seems to know more about what is going on in the ANC than the ANC itself – tweeted that ANC national chairman Gwede Mantashe is linked to one bidder.

Let’s hope a lesson has been learnt. Nothing will doom that station quicker than the involvement of someone like Mantashe, even behind the scenes, and for MultiChoice to compound the damage to its integrity.

Anton Harber is Caxton Professor of Journalism at Wits University. He was a founding editor of the Mail & Guardian, editor-in-chief of eNCA (an ANN7 rival), executive director of Kagiso Media and director of Africa Check.