LATEST NEWS
Home Advertising Raise your Voice, not your Phone: The anti-bullying vid that should go viral

Raise your Voice, not your Phone: The anti-bullying vid that should go viral 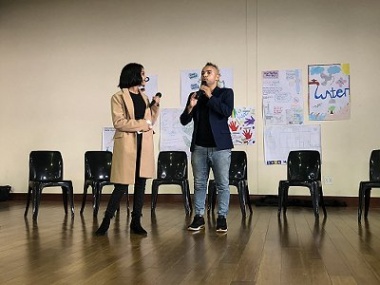 
Social media is a minefield. Equally uplifting and downright nasty, any hour spent on the platform could induce a range of emotions from uncontrollable laughter to pure rage.

Hardly surprising then, that the subject of children on social media is a hot topic. Parents are constantly exhorted to raise the issue of smart smartphone use with their kids, and schools around the country are regularly calling in experts to chat to kids about the damage uncontrolled use can have on youngsters.

The biggest problem schools have to contend with though, is bullying – and a spiralling increase in viral videos only serves to highlight the problem. Which is why the Western Cape government may just have come up with the most effective solution that addresses both the insidious nature of bullying, and the drawbacks of inappropriate applications of modern technology.

Their ‘Raise Your Voice Not your Phone’ campaign incorporates a mobile toolkit that is easily accessible and shareable – and made to go viral.

Developed by digital specialist agency Hellocomputer and FCB Cape Town – in conjunction with child psychologists – the campaign features a video of a fake bullying incident in a schoolyard, followed by the reactions of various learners to five questions asked in sequence after viewing the video – and their eventual realisation of just who the bullies are.

The message, says WCG head of communication, Bronagh Hammond, is quite simply: “Powerful”.

“Everyone I’ve shown it to has come back strong – not only because of the emotions that learners portray themselves; it’s also emotional for viewers as it brings back their own memories, and sympathy for learners,” she adds.

It’s an important message at a critical time. Every four years, Trends in International Mathematics and Science Study (TIMSS) concludes an exhaustive study on factors that can affect learning, amongst others. The latest report, published in 2015, found that South African pupils ranked third highest in reports of bullying, of the 38 countries surveyed. <Grade 5 pupils reported the highest occurrence of bullying out of the 49 countries surveyed, with 44% of pupils reportedly being bullied “about weekly” and 34% “about monthly”. The figures go to nearly 50% for Grade 9 pupils.> There’s little hope that next year’s report would show any decrease.

The good news, though, is that the entire toolkit is not only easily accessible, but also easily incorporated into lesson plans for Life Orientation teachers, adds Hammond “They can click on the video for questions and fact forms; it’s available to any teacher at any school.”

‘Raise your Voice’ also provides tips on how to help victims of bullying, as well as support resources available for learners experiencing this abuse.

“Bullying is prolific, as shown by the increase in viral videos and the damage it can do to learners, regardless of content. The Raise Your Voice Not your Phone campaign brings the same message home: that when you video, post or retweet incidents of bullying, you are actively participating in it.”

The campaign, which kicked off in June with SRC pupils from across the country participating in a launch that also featured Kfm DJ Carl Wastie as MC, is ongoing: in late August, provincial education minister, Debbie Schafer, visited Beacon Hill Secondary School to promote it, along with Wastie and Idols SA winner Paxton Fielies.

"Bullies will poke at things that they see as weaknesses but this is your uniqueness. You are the first and last edition of you. That means that you're limited edition. Be proud of who you are and use your power to make a positive change in your circle" ??? @carlwastie pic.twitter.com/8txBNsp6eF