It was a modest, soft-spoken Catholic nun from the US, Sister Janice McLaughlin, who exposed the “protected villages” set up by the Rhodesian government in 1977. The villages were ostensibly to protect civilians from the violence of the liberation armies, but were actually concentration camps behind barbed wire.

McLaughlin, using the access the church afforded her, and writing for a London-based Catholic newsletter, gave the world detailed first-hand descriptions of the poor conditions and hardships of these camps. Ironically, she implied that the camps were helping the guerrillas from the liberation armies in their fight fighting against the Rhodesian government. Other media picked up and ran the story.

Ricardo de Mello is a largely forgotten Angolan hero of investigative reporting. When the country opened up to multiparty democracy and allowed a free press in the early 1990s, De Mello started a daily called Imparcial Fax. Only a handful of subscribers got it by fax. But he began to report the war in a way that broke through the state propaganda for the first time, and publish leaks from within the ruling elite.

He was murdered in January 1995. His death was widely believed to have been orchestrated by an Angolan minister.

Magema Magwaza Fuze travelled through Zululand in 1877 to visit King Cetshwayo. His purpose was to check out stories that the king was killing Christian converts, thus forcing missionaries and converts to flee. He found no evidence of this, and the piece he wrote in Macmillan’s Magazine in the UK in 1878 proved to be an invaluable record of life in the kingdom.

These are three of the 39 stories recorded in our recently published anthology, Southern African Muckraking: 300 years of investigative reporting that has shaped the region. The book extends the canon of investigative journalism, starting with Adam Tas in 1706 through to #GuptaLeaks in 2017. The trove of emails exposed the extent of the “capture” of the South African state by business interests allied to former President Jacob Zuma. The book uncovers a number of forgotten gems along the way.

Each case study is introduced by an expert in the area, outlining the context, importance and genesis of the story.

Some would argue that the book uses a very loose definition of investigative reporting. Some of the protagonists were not journalists, and some wrote for outlets other than conventional newspapers, usually stepping in when conventional journalism was blocked. We felt an expansive definition was essential, given the limitations on this kind of work in this part of the world. A more traditional Western definition would have excluded some of the most important and interesting work.

Some of the stories were carried in mainstream media, many came from “alternative” media, and at least one came from a state-owned outlet. Some were the result of extensive sleuthing, some from fortuitous leaks and some from canny editors pointing their reporters in the right direction. 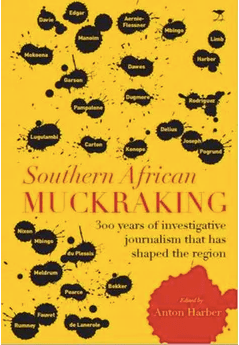 What these reports have in common is exposing matters of public interest – sometimes at great risk to the journalists – and holding to account those who abuse power. The book shows how rich, varied and inspiring this history is, and how powerful an impact it has had on the region.

What is apparent in this chronological account is that some of the countries of southern Africa – like South Africa, Zimbabwe and Namibia – have long traditions of muckraking, while there has been a surge of recent work from countries like Lesotho, Botswana.

Much of the earlier work is by individuals operating on their own. More recently the work was often done cooperatively by large groups, across borders and media types. Less is now coming from conventional newsrooms, and more from special investigative hubs supported by donors, which might free journalists from the constraints of commercial ownership, but may also leaves them dependant on the goodwill of funders. South Africa’s amaBhungane was a pioneer among these centres, but others have now popped up in Botswana, Tanzania, Mozambique and Lesotho.

It becomes clear that the digital age offers muckrakers a great deal of scope because of the profusion of massive data leaks. But it also poses many threats because of the increased capacity for surveillance and harassment.

Courage shines through on almost every page, whether it comes from the often-unheralded whistleblowers or the five cases where reporters have been killed or disappeared, as well as the many instances of detention and harassment.

At a time when at least one major South African newspaper, the Sunday Times, has had to withdraw and apologise for investigative work that went wrong, the book is a reminder that such aberrations are vastly overshadowed by the quantity of really excellent and important work.

Image: New book extends the canon of investigative journalism from 1706 through to 2017/Shutterstock