My role model and mentor: A tribute to Harvey Tyson 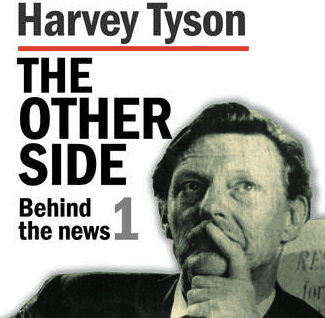 Harvey Tyson was always one of my favourite people for a lot of reasons, not the least of which was his ability to make me loosen up, laugh and stop sweating the small stuff.

I don’t know why I subjected myself to it, but whenever I had the chance I would inveigle myself into a golfing four-ball that at the very least had Harvey Tyson in it but at best both Harvey Tyson and Rex Gibson, the former editor of the Rand Daily Mail and subsequently Tyson’s deputy at The Star.

Harvey had the incredible ability to play golf and indulge in serious bird watching at the same time. It wasn’t great for one’s golf but it was a laugh a minute. In fact, now that I think of it, Harvey and I, along with that turbo-twitcher and another former editor of The Star, Peter Sullivan, hold something of a record for identifying 42 different species of bird at the Joburg Country Club all in the space of playing 18 holes.

It was on days like those that I recognised that Harvey Tyson was a quite outstanding editor. He had, you see, this incredibly annoying habit of talking nineteen to the dozen on his opponent’s backswing.

But, what sets editors apart from the rest of mankind is that where ordinary mortals would apply golfing gamesmanship by talking on their opponents backswing, Tyson would always display his obsession for both sides of the story by talking nineteen to the dozen on his own backswing.

Irritating as it might sound, particularly if you were his partner, Tyson’s constant gabble and heart-stopping yells of “HEY, ISN’T THAT A YELLOW BREASTED APALIS…?” just as someone was about to putt, never really prompted anyone to avoid playing with him.

Tyson was only just warming up when most of us left him sliding down the banisters with a glass of J&B in his hand, whooping like a kid who had just cracked matric.

Somehow, he has always had the knack of persuading you that talking on your backswing is ultimately good for your game.

It was the same argument he used in the mid-1980s when government paranoia over the English press was at its highest and almost every week a contingent of security police would enter Harvey’s office at The Star and tell him they were shutting the paper down.

Time after time Tyson employed all those golf course communications skills and more often than not the cops would walk out of the building trying to remember what on earth they were doing there in the first place.

I believe Harvey Tyson was one of South Africa’s truly great editors. He was an excellent manager of people, a wordsmith of note and a public speaker of the highest order.

He could also party like no one I’ve ever known.

Only a year or two before he retired I remember leaving a dinner party just before midnight because of a date with Harvey and other members of the Finance Writers Golf Club at 7am on a course about 100 kilometres out of Johannesburg.

Tyson was only just warming up when most of us left him sliding down the banisters with a glass of J&B in his hand, whooping like a kid who had just cracked matric.

But, there he was at the crack of dawn the next morning, on the first tee, talking the hind leg off a donkey and looking as though he had put in a solid eight hours kip.

We noticed something was wrong when he fell on his backside trying to play his first shot. He then proceeded to fall on his bum after every shot on the next three holes.

It took him a good half hour to realise that the reason he was falling on his bum was because he had forgotten to don his golf spikes and was still wearing his dancing shoes.

Harvey Tyson was my role model and mentor. He was a larger than life action-man with a passion for justice being seen to be served. I shall miss him.